There’s a new contender for your breakfast loyalty in Vancouver, but it will be a familiar spot for those who are already fans of Victoria’s popular Jam Cafe. The rustic restaurant with an eclectic all-day breakfast menu has quietly opened their brand new Vancouver outpost.

Taking over the former Café Medina spot on Beatty (most recently the short-lived Danica’s Café), the Jam team–Jam Café Victoria owners James and Candy Walmsley and Vancouver-based Mike Deas-Dawlish–did a serious overhaul of the space, addressing some challenging features on site. Diners who frequented the old Medina may not have realized the cooking came from the shared kitchen with Chambar, and when Danica’s moved in, they were limited to electric cooking only.

Jam Cafe not only built a new, fully vented kitchen, but also bumped the kitchen back in order to create a new bar area. And, as Deas-Dawlish points out, they were able to take away the bar from the main seating area, opening up a significant space for seating, including a coveted window booth for larger groups. 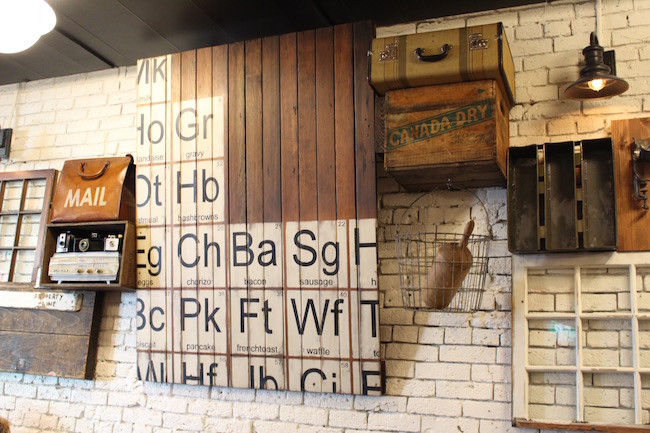 The decor is a meld of rustic-chic, with a nod to Canadiana, cool conversation pieces (a Periodic Table of brunch elements, made by Candy Walmsley, for example), and several thoughtfully chosen vintage items. White brick and white subway tile infuse the space with brightness, and the overall tone stays in stride with the Island original.

Also in line with the original Jam Cafe is their menu of hearty, playful, and perfectly share-able breakfast creations–many of which started out as daily specials that clearly made a lasting impression. The food at Jam Cafe is top notch, as anyone who willingly waits in line for a table will attest, too. Big, beautiful plates take breakfast to a fresh level of fun, melding the most important meal of the day with culinary staples. 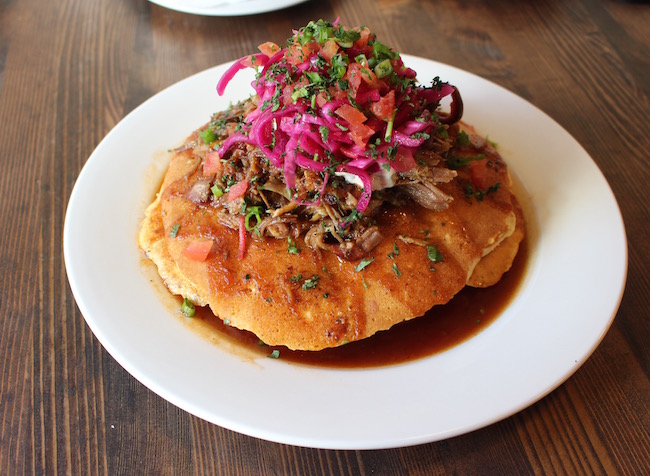 Pulled Pork Pancakes is comprised of two plate-size, fluffy golden pancakes, loaded with tender pulled pork sparking the perfect vinegar-y BBQ tang, a schmear of maple butter, and crowned with pickled red onion and sour cream; you can get some maple syrup on the side to drizzle on if you want that extra little boost of sweet to round out the oh-so-savoury of this vibrant dish.

Fried chicken guest stars in a more expected place, like Chicken and Waffles, but then gets paired up with the less traditional in a French Toast and Eggs Benedict version. The latter boasts two perfectly wobbly orbs of eggs poached to order complemented by a cheery Hollandaise and a sprinkling of sweet and slightly toothsome roasted corn salsa.

They’re also known for their breakfast “bowls,” including their famous Charlie Bowl, which essentially marries a good ol’ sausage, biscuit, and gravy with a hash, and comes topped with a cheery duo of sunny-side up eggs. 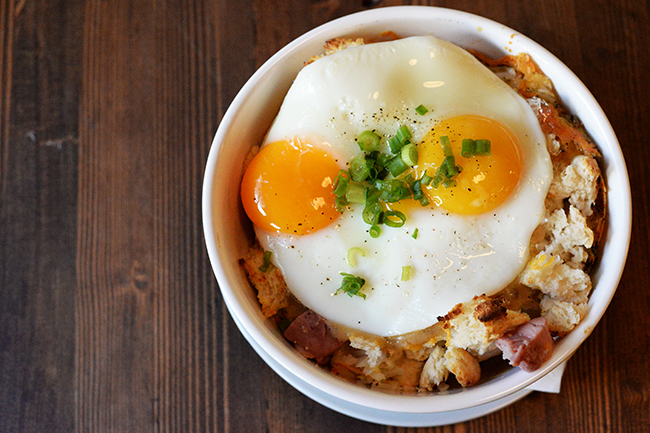 Named for one of the three Walmsley sons (brothers Harry and Jack are honoured with the Harrison Fernando and the Cracker Jack, respectively), the Charlie Bowl comes in classic and small sizes; how anyone could make it through the classic size is a head-scratcher–and precisely why the Victoria location sometimes runs a challenge and awards a prize to customers who can eat it all, down to the bowl scrapings. We’re told they’ll probably start offering this in Vancouver soon, too.

On the sweet end of the spectrum is the starter-size portion of Pan Fried Oatmeal, smothered in decadent lemon curd swimming with blueberries and strawberries. They’ve got red velvet pancakes, and the aforementioned Cracker Jack happens to be French Toast stuffed with Nutella and bananas.

It’s seriously hard to know where to start with Jam Cafe’s menu, which means you can have fun filling your table-top with a few selections from the sweet and savoury sides and do some serious sharing. It also means you may find yourself planning your next visit before the leftovers from your current visit are packed up to-go. Oh, and they do lunch, too!

Ideal for casual morning meet-ups, cheat day weekday breakfast, hangover eats, laid back lunching, or weekend brunch, odds are high Vancouver’s Jam Cafe will draw lines to rival the original’s, since they seem to have found a terrific recipe for great food in a comfy space. 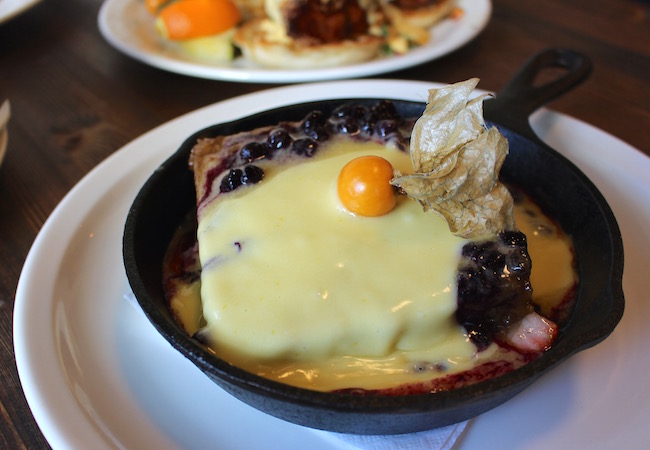 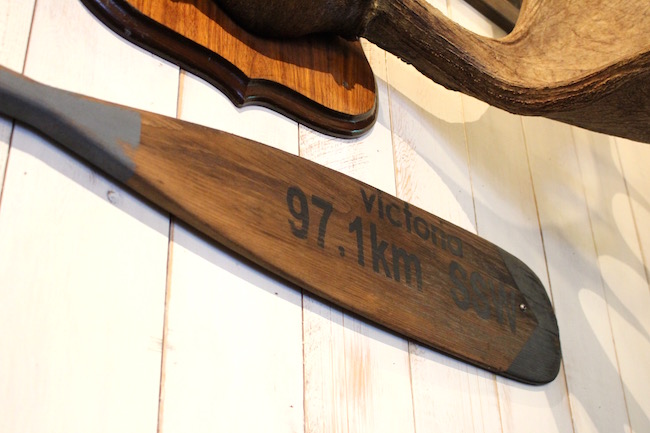