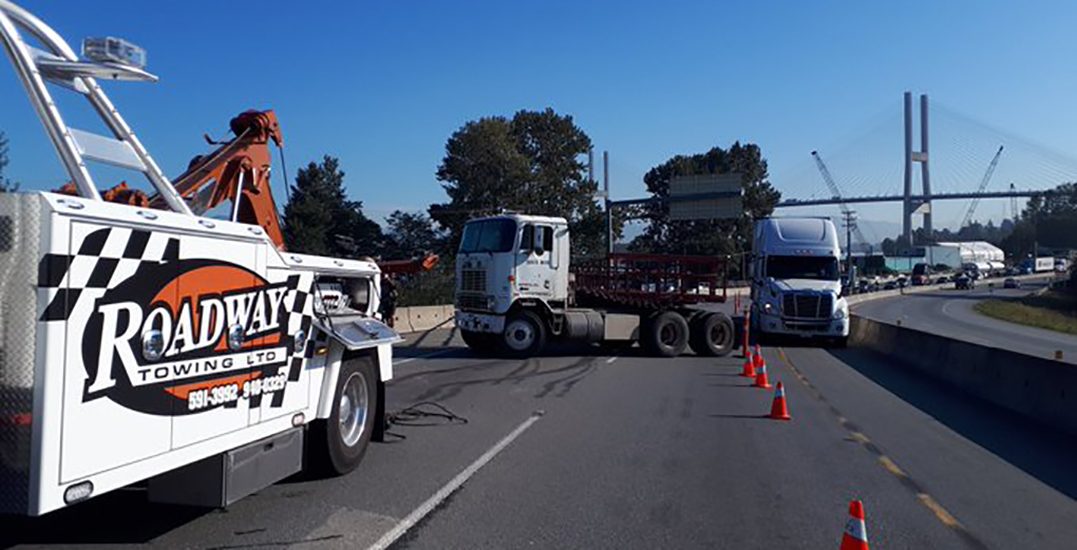 Commuters in Delta were faced with a nasty traffic jam during their morning commute.

On Tuesday, at around 7:23 am, police attended to a jackknifed semi-trailer on Highway 17 in Delta. Drive BC later reported that the trailer was blocking the right lane before the Highway 91 connector.

Police said they later found that the driver of the semi-trailer was uninsured.

Cst. Ken Usipiuk of the Delta Police Department (DPD) shared a photo of the driver’s ticket on Twitter.

The hefty fine added up to a total of $1,305, including two written offences for no insurance and one offence for not performing a pre-trip inspection.

Driver should have actually done a pre-trip this morning 🙁
Traffic is a nightmare westbound Highway 17 @deltapolice pic.twitter.com/8dcRaib0wE

Fortunately, at around 9:21 am, the semi-trailer was successfully towed. Police say that all westbound lanes are moving, although delays should be expected as traffic volume begins to ease up and return to normal.

Tow truck arrived on scene and working their magic to clear the truck off the highway. Please have patience and enjoy the sun hopefully the visual distraction will be cleared within the hour. @deltapolice pic.twitter.com/hHlI5IKOZ1

Good news the jackknife portion is undone. Tow just needs to reattach and pull off the Hwy hopefully be clear within the hour @deltapolice pic.twitter.com/JwdJ1YlsAE

Great partnership with Roadway Towing ! To expedite the vehicle off the Hwy to do this is referred to as B training disabled vehicles. All westbound lanes are now flowing expect delays. @deltapolice pic.twitter.com/8Q05mFoltJ