These are wildly exciting times in the Vancouver technology community; however, there is a huge dichotomy in who is investing and just as importantly, who is profiting from this boom.

Today, Vancouver is shining as one of the top 20 active startup ecosystems in the world and is home to some of the hottest global tech companies. The big problem is that most of the investor profit on the numerous billion dollar success stories is going to U.S investors.

Every year, hundreds of local entrepreneurs head down to Silicon Valley, cap in hand, in hopes of becoming the next big thing. To me, this is crazy if you consider there are literally billions of dollars sitting in Vancouver; mainly in real estate. Don’t get me wrong, I love Vancouver’s real estate, but everyone needs diversification and should look into the many companies in our own backyard. Vancouver’s tech success stories over the past years still seem unfamiliar to some, but savvy investors have already invested millions of dollars in our tech ecosystem.

“Nobody knows about us,” Cymax CEO Arash Fasihi told Cantech Letter in April. “We’re probably one of the largest tech companies in Canada that nobody’s heard of.”

While I think Cymax (an online furniture retailer that is seeing explosive growth) is just one story capable of becoming the next household name, even with its forecasted $190 million-plus in revenues, Cymax had trouble getting noticed until very recently. Salman Partners Inc. co-lead a $30 million financing for Cymax this last month.

There are others as well: Slack, the team collaboration tool, co-founded by Flickr co-founder Stewart Butterfield – is now valued at USD$2.8 billion.

There’s also Coastal Contacts, which founder Roger Hardy recently sold for CAD$430 million to concentrate on his next venture, SHOES.com.

Astute investor Harald Ludwig has also increased his pace in investing in the local technology sector.

And then, of course, there’s Hootsuite – reported to be valued over USD$1 billion. Hootsuite, a social media management tool is on everyone’s lips right now in part due to its hockey stick growth and its rumoured IPO.

“The social media company I founded in 2008 – now has close to 1,000 employees and over 12 million global users, including 800 of the Fortune 1000 companies,” said Ryan Holmes, CEO of Hoosuite. “Vancouver’s international reputation, livability and growing pool of world-class talent have all made it possible for us to start a global tech company and grow it here. It’s also exactly why some of the world’s most recognizable tech brands like Amazon, Microsoft and Facebook have recently come to Vancouver to set up shop, as well.  As a result, British Columbia’s high tech sector now employs more people than the mining, oil and gas and forestry sectors combined. For me, this is an incredibly gratifying and a promising shift in focus for investors.” 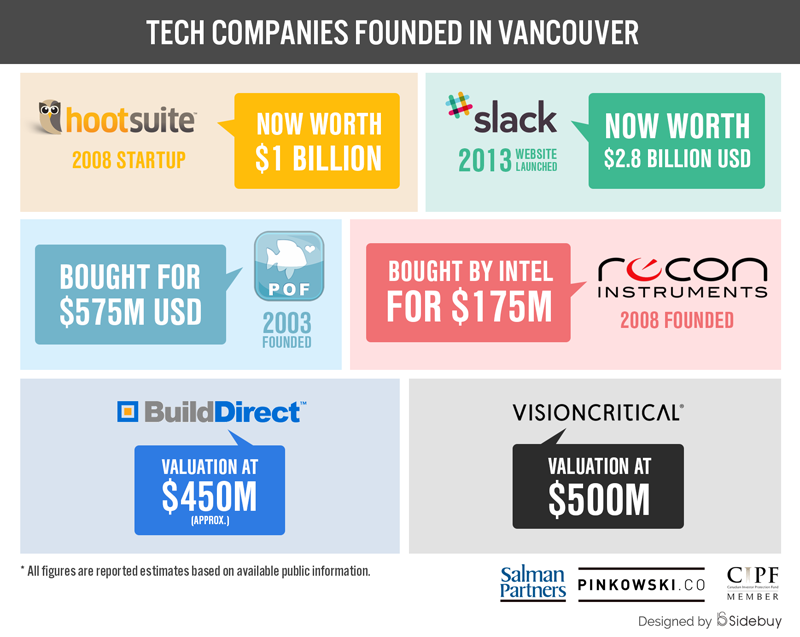 One of the factors that are accelerating the growth of Vancouver’s startup ecosystem is the prevalent entrepreneurial mindset where business founders and leaders are resilient risk takers, and have strong work ethics. The tech sector now occupies nearly 40% of downtown Vancouver commercial real estate, and employs 86,800 people.

There is also a reason why conferences such as TED, Traction and Grow are hosted here.

“Now, more than ever, Vancouver has a booming technology scene filled with innovation and creativity that is accelerating rapidly,” said Jeff Booth, Co-Founder, President and CEO of BuildDirect. “We are just one of many technology companies in Vancouver who have been fortunate enough to benefit from the community here.”

Socioeconomic factors, such as lower corporate taxes and immigration policies are giving Vancouver an advantage as a startup hub. Great living standards and breathtaking views make Vancouver one of the most attractive cities worldwide.

Just like the larger tech scene itself, the theme of founders reinvesting locally is just beginning here. Instead of foreign investors swooping in to find the next billion dollar idea, Vancouverites should be participating. With the thriving and now established local tech ecosystem, now is the time to invest and turn an emerging startup into the next big thing.