From the dance floor to the D.J booth: My interview with 23 year old house music D.J, Nicky Romero, that would give me a sincere glimpse into his world. 800 avid fans packed into Celebrities night club in Vancouver on Friday to experience the undeniable talent of EDMs newest golden boy, Nicky Romero.

He has played with some of the world’s most prestigious musicians, including Tiesto, Avicii, Madonna, and Usher. He says he is “thankful” for David Guetta, whom he has also played with, for “opening the doors for house music into the mainstream.” Also, check out an interview with influential electro artist Paul van Dyk, whose unique collaborations are helping to bridge the gap between numerous genres of music.

In a rapidly changing industry, Romero’s sudden climb to international stardom can be attributed to his versatile nature and genuine love for what he does. Adapting an electro-acidic sound, his music seems to ooze and move with low bass and then punctuate suddenly with sharp beats, like rain fall on the surface of a wave.

The crowd began to chant “we want Nicky” and thump on the glass protecting the D.J booth, leaving behind sweaty hand prints. Arriving in a leather jacket and a sense of cool calm, Nicky finally saunters onstage and orchestrates the masses into a dancing craze. Picking up the microphone, he yells into the crowd “hands up in the air!” and almost instantly the entire room is swaying at full length. His fingers play eloquently against the knobs, buttons and dials as if they were piano keys, dropping the music into a momentary chasm of silence, only to build it up again into an explosion of pulsing sound.

I was privileged to observe this phenomenon of crowd control from a new perspective: standing behind the man who gazes out into a sea of strange faces night after night. I couldn’t help but wonder how it feels to draw such a following, and not know a single person?

“Let me put it this way,” Nicky explains after the show, “If I wave my hands to the left, and the entire crowd follows, it’s stunning. I feel connected to the people in the way that we are all moving to the same music.”

For Romero, growing up as a musically inclined child, and learning to play the piano, drums, saxophone and guitar, he believes that rhythm is an inevitable part of who we are since birth.

“As a baby inside your mother’s belly, you react to sound and are able to sense rhythm, and that is something that can’t be taught. When you grow up, that natural ability to feel music never leaves you,” begins Nicky. “When I’m making music I am always asking myself what sounds would keep me moving and if it doesn’t hook me, I throw it away.”

The genre of house music, which contains very little lyrical structure and relies almost entirely on consistent sound, is the perfect place for him to explore the notion that movement is instinctual. Romero pauses for a moment and looks at the musical note tattoos on both his arms before finishing, “You know, it’s a very powerful thing…using only a beat to tell a story.” 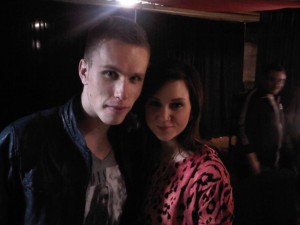