Julia ‘The Jewel’ Budd is no stranger to staying alert and keeping positive in the face of the MMA injury bug.  After training hard to cement her place in the upper echelon of the women’s world featherweight (145 lb.) rankings, Budd has done so in the face of repeated opponent changes. When she enters the cage at Invicta Fighting Championships 5 next Friday evening for her main card bout with the flourishing promotion, she will come face to face with ‘Miss’ Mollie Estes, the sixth fighter she’s agreed to face. This is only Budd’s third fight with Invicta.

To see Estes’ name is also to see Budd: The face of matchmaking flexibility. After fighting Elina Nilsson at Invicta FC 2, Budd was set to face Elaina Maxwell at their third event.  Maxwell would drop out due to injury and Budd would then face Danielle West instead. Both were first round TKO victories. Months later, Budd was to face Ediane Gomes for the No. 1 ranking and the right to face Marloes Coenen for the vacant Featherweight title. However, after Cris ‘Cyborg’ Justino signed with Invicta and plans changed, Budd was set to face Fiona Muxlow.  However, an injury to Gomes then resulted in Muxlow facing Cyborg. After awaiting an opponent for a week, American Veronica Rothenhausler had to bow out of her fight against Estes due to injury, matchmakers decided to pair the two fight-less featherweights up rather than attempting to find last minute replacements. For Budd, it is just part of the routine of being a mixed martial artist, and the importance of honing your ability to be ready for all challenges – something prevalent throughout her breakout last year.

“I feel like 2012 was an excellent year,” began Budd in an exclusive interview with Vancity Buzz. “I feel like my training all came together, and my confidence in my takedowns and my wrestling has grown. I got a lot better, and I’m more confident being a complete mixed martial artist instead of just a Muay Thai fighter that’s doing MMA”

The creation of Invicta Fighting Championships has been a major player in fostering that growth as well, giving Budd, and all female fighters, a stage on which to shine. Every one of her fights thus far has been on the event’s main cards, including the upcoming fight against Estes.

“They’ve really given (women) a stage to shine on,” said Budd  “I think it’s upped the game for the way we deserve to be treated and everything.  They way they’ve marketed Invicta and the fact they’re keeping it an all-female organization.  They’re proving it can be successful too.  I’m grateful that they started it and they’re giving me great opponents to showcase my skills with.”

The opportunities presented included a title eliminator to determine  who would face Coenen, where I asked Budd to recount the day in mid-February when plans suddenly changed.

“It was all of a sudden,” laughed Budd. “I basically found out the day that Cyborg announced that she was going to be fighting Ediane.  They contacted us to just let us know what was going on. Originally, when I signed on for my fight, it was that the winner of Ediane and I would get a title shot in July.  Now I’ve got to win this fight, and one in July, and then I’ll get a title opportunity. I was glad that they kept me on the card and have found me a good opponent to fight against, but I admit I was a little disappointed at first.” 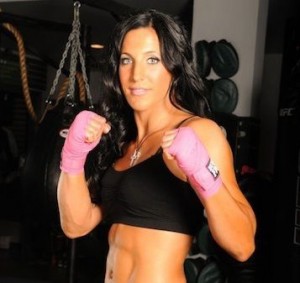 “I think that they want to build the division, and they feel that Cyborg with her name and popularity will definitely do that,” continued Budd.  “[It] will make them more successful. I think in the long run, it’s a smart business move for them, so I’ve just got to treat it as business.  This will help build me, and help showcase what I can do. Just keep on fighting and get another title opportunity by the end of 2013”

With the different styles and methods of training out there, there tends to be a lot of difference in preferences.  Some fighters tend to train, and let their coaches study tape of their opponents. Some like the methodical approach of breaking down hours of fight film,  and building a game plan from that.   Budd’s approach  is all-encompassing, and sensical to her needs.

“I just basically train for everything,” started Budd. “You adapt for a specific fighter a bit here and there, but mainly, a lot of the time you can think that you’re fighting a standup fighter, and then they shoot for a takedown in the first 20 seconds. You can never underestimate what somebody’s going to do, and you have to be prepared for everything. I just went from there. Kept up with my conditioning and my striking – You just have to adapt.”

That adaptation includes training minutes away from home. Previous interviewee Graham Spencer admitted he takes the majority of his training camps to Sacramento, California, where he trains with Team Alpha Male, admitting he wouldn’t leave home if he had the right resources.  Budd discussed the personal advantage of staying home to train with her family, her dogs (her “best buds” as she put it,) and very capable competition at  Gibson’s Kickboxing and Pankration in Port Moody.

“Being close to home and being comfortable in your training environment is great, “ Budd admitted. “We’ve got such good guys here that it’s never easy. It’s not like I’m kicking everybody’s butt in training. I’ll have the days where I’m on top and then days where I’m getting beat up a bit.  I think that’s a big thing. If you start to be a big fish in a small pond, then your training gets stagnant and you don’t adapt. Here, I have so many guys that are better wrestlers or have better standup. I’m always getting challenged and pushed, and I think that’s the biggest thing for me here.  Maybe that’s why people feel like they need to go away from home to train. That hasn’t happened here. I love Vancouver, and I love Port Moody and I love being close to home and seeing my family when I want to, and that’s the biggest benefit for sure. Not only do I have everybody that pushes and challenges me to be the best that I can be, but I’ve also got the luxury of doing things like going home and sleeping in my own bed and being comfortable at the same time.”

In closing, Budd discussed the changing landscape of women’s MMA, including the UFC, where  she is familiar with the roster, having beaten signee Germaine de Randamie, and having fought Amanda Nunes and current champion Ronda Rousey. With many fighters looking to go up, or down a weight class for their chance at the UFC, Budd admitted things right now are just fine the way they are, and that any change in weight class would require a bit more thought than just cutting harder next fight.

“I’m happy growing as a Featherweight right now,” closed Budd. “I’d have to see after this fight where my weight jumps back up to, and try to stay light and see if it’s even possible.  I’ve made 139 before, 140 and 130 for a couple Muay Thai fights. I’d just like to see. See if it’s comfortable to walk around lighter than I do and play around with it, but I’m not going to force it either. I feel comfortable at 145 and feel like this is where I have all my strengths and this is where I’m most comfortable. But right now, I know they’re not talking about any other divisions in the UFC.  For now, it’s just about going out there on April 5, getting a win, and looking at what’s ahead” 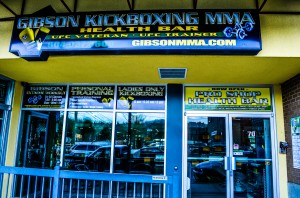 In addition to her training regimen, Budd trains three classes a day at Gibson’s Kickboxing and Pankration, and you will often see her at the gym’s health bar concocting healthy shakes and lunches for the students and trainees.  A community staple since 1997,  Gibson’s is located at 70 Kyle Street  in Port Moody.  Call them at 604-937-3600 or visit them online for a full list of classes and schedules.

Julia Budd fights Mollie Estes on the main card of Invicta Fighting Championships 5 live this Friday evening.  The preliminary card begins at 4 p.m., while the main card commences at 6 p.m..  You can watch the event online through streaming iPPV at a cost of $9.95 at InvictaFC.com