When I got word that I was going to be interviewing Dave1 from Chromeo I was, to say the least, stoked. I’ve been a Chromeo fan for years now and have been to EACH of their shows in Vancouver since they started touring in 2004 supporting She’s In Control. After nearly 7 years of annual or twice a year shows in Vancouver I finally had the chance to talk to one of the artists who has supplied me with hours upon hours of dancing.When I called Dave he was at a dry cleaners and had to delay the interview for a few minutes as he had to pick up his clothing. “No, it was expensive. You have to spend money to look like you have none. Thanks again” said Dave as his focus shifted back to me. I managed to get in touch with Dave as he was enjoying a brief (and rare) three days from working on his music. “Man it is going to be crazy to end this year. We get back on the road here in The States then we are off to Europe. Then another little break then the BIG North American jaunt starts”. I mentioned to Dave that it always seems as though Chromeo is out on tour “Well this is like the last hoorah before we get all our focus on the new album”If you have ever been to a Chromeo concert you know when you walk into the venue that it is going to be jam packed and EVERYBODY is going to be dancing. Hell this last time they played The Commodore in Vancouver even the bar staff was dancing. “Well that makes me happy to hear that” laughed Dave. I brought it up to him that he had more swagger on stage this time around and he touched on that during our talk “It comes from the crowd to be honest. This time around there was ALOT more girls in the front row.” “So it takes a few more girls in the front row to get you out from behind the synth gear and get you dancing with your guitar on?” I asked. “Well you know, for people like you and other fans that have seen us a bunch of times we need to try and mix it up. Do something different. I will admit I have been moving around on stage a lot more and I will also admit that having the girls in the front row helps that too”. 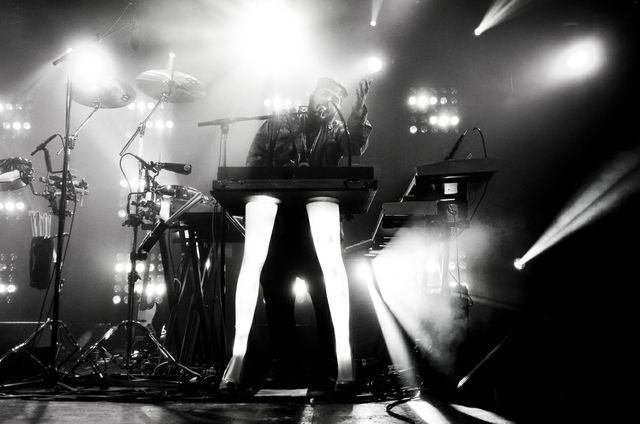 With the tour schedule in place to end 2011 I wanted to know what was in store for the band in 2012 “The next Chromeo album is going to be 10 times doper than anything we’ve ever done” With that quote I needed to get a time frame for it’s release. “I don’t wanna rush it you know? I can tell you that the start of 2012 P & I will be back in the studio writing. Working on it. Getting the songs ready. We have to produce it first. Record it. Listen to it. THEN decide if it is good enough to be the new Chromeo. Then and only then do we incorporate it into the live shows. So I think this next tour here in the fall will feature some new stuff that will be out on the new album.”

“With our music and they way we release it, like it comes out on the internet first. The blogs jump all over it and by the time we get into your city or whatever it is already a mini hit.” If you bought the Deluxe Edition of their latest album Business Casual then you were treated to some remixes of the song Night By Night. They song was released shortly after it was recorded and Dave & P-Thugg invited DJs and producers to make their own version of the song. The guys picked a few they liked and put them on the album. “We aren’t just embracing this new blog music culture, it is a part of who we are.Out identity as Chromeo is built on that.”

I had to take a moment to ask Dave about his style. “It’s tough with fashion stuff, you know? I don’t want to come on here and brag about it. I don’t find that classy. You’ll never catch me on an interview or on a blog being like ‘I’m about to hit the such n such boutique. SWAG’. That kinda stuff is corny. Fashion is a part of who you are. It’s a part of what you like. it can be a part of your little aesthetic ritual. But you don’t have to flaunt it if you wear it well.”

Near the end of the interview i got a bit nostalgic with Dave “I remember how I found out about Chromeo. I was walking around Vancouver & I saw the poster for your show back when you had the cover from Fancy Footwork with the light up legs as the promo material.” *laughs* “That confirms all my theories that a good album cover can sell a new band to people. I want fans to look at Chromeo as a lifetime band. A band that keeps providing a funky soundtrack for 5, 8 10 years and on”. I know the duo will be providing my soundtrack for more years to come now, and I find it hard to believe you if you tell me they won’t for you. Now stand up and show me your fancy footwork.