Just a couple months month ago, Vancouver-born John Alessio celebrated his 34th birthday.  He is still young by all stretches of the imagination. But in the fight game, he’s on the back end of his career, which he’s been acknowledging as of late. Alessio wasn’t even a year clear of his graduation from Cowichan Secondary when he debuted professionally in 1998. After 15 years at it, he’s trudged on, with a fight resume that reads like a who’s who of Mixed Martial Arts.  He’s fought for the UFC, Maximum Fighting Championship, Pancrase, WEC, King of the Cage, PRIDE and DREAM. Those are just the bigger organizations.

With over 50 pro fights to his name, Bellator Fighting Championships came calling. Alessio answered, and makes his debut for the promotion on September 27th in Portland Oregon.  Alessio will be one of the eight participants in the season’s Lightweight (155 lb) Tournament, and fights Will Brooks, seven years his junior and with 40 less pro fights. The signing isn’t surprising given his experience and what he brings to the table, but during this exclusive interview with Vancity Buzz, Alessio admits it’s something that just took the right timing and the right opportunity to happen.

“The Bellator thing for me has been (in the making) for years,” started Alessio. “They had approached me a few years ago, and it ended up not working out. Then they asked me about the reality show Fight Master, and it just wasn’t something I was into doing so I turned that down. But shortly after that, we went back into negotiations for the tournament. That was something I really wanted. The tournament’s a little bit old school. I’ve been doing it for so long. I like tournaments, so it was nice.”

The tournament-loving mentality was Alessio’s calling card in the early part of his career. Many of his early fights were in one night tournaments, and after going 7-3 in those days, he earned a call up to the UFC to fight Pat Miletich for the Welterweight Championship. Only 20 at the time, Alessio still remains one of the youngest fighters to receive a UFC title shot. Now, he’s one of the veterans in a field of eight participants that include former UFC fighters like Marcus Davis, Rich Clementi and rising stars like Saad Awad, Martin Stapleton and Brooks.  How did Alessio like seeing the lineup for this tournament?

“It’s good!” Alessio replied emphatically. “I’ve seen the other fighters and I’ve watched them do what they do, and I always thought something like me and Marcus Davis could always happen, you know, or with Clementi. So now to be in a tournament with these guys? It’s such a great tournament to win. You look down that list and all the fights we have combined. I don’t know how many fights we all have combined, but it’s got to be high. I’ve got 51. Rich Clementi’s in his 60s or 70s, and Marcus has 20 or 30 and so is Saad Awad. The one that has the least is my opponent (Will Brooks.)”

(For what it’s worth: The total number of documented pro fights between all eight participants coming into September 27th is 232 – Rich Clementi has the most at 68.  Will Brooks has the least at 11.  Alessio’s 51 has him in 2nd place.) 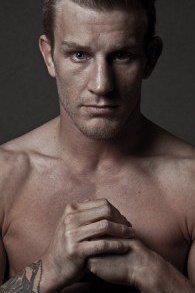 Brooks is somebody that Bellator has been touting since his debut in January. After upsetting long-time Japanese fighter Satoru Kitaoka at last year’s DREAM New Years Eve card, Brooks was brought in immediately to help bolster Bellator’s Lightweight Division, and was a focal point of sorts (with numerous stories into his background and upbringing) in Season 8 before falling to Awad in the semi-finals. After rebounding with a win in July, much attention is expected to be cast on Brooks again. Alessio isn’t fazed.

“I didn’t really care who I got. I find it a little bit humorous though that I’m stuck with a guy who’s going to want to take me to the ground,” admitted Alessio with a laugh. “I thought maybe I’d get a guy who wanted to go toe to toe, because they’ve heard me rant and rave about a lot about it. But don’t get me wrong. I’m a mixed martial artist. I’ve got good jiu jitsu, I’ve got tons of wins by submission. I like that, but if it’s going to the ground, let’s not hold each other you know?  Let’s play the game and shoot for stuff.”

That fight will be just a few hours away from his hometown, and Alessio admits there will be a fair bit of support coming down the I-5 to cheer him on.

“I’m sure there’s going to be more than a few friends and family coming,” started Alessio. “I know I’ve got a few friends from the Island coming over, and there’s some others from Vegas and California coming.  I’ve lived a little bit everywhere over the years (laughs.)”

Alessio lives and trains full time in Las Vegas now, and works on his fight game with the likes of Gil Martinez, Robert Drysdale and Kyle Griffin.  While he’s been there for many years, he’s always been quick to acknowledge his hometown in past interviews, and his love for Vancouver, and his passion toward his Canadian fanbase has never dwinded.

“Man, I love the Canadian fans and support. They’ve always cheered me on and held me as a local fighter.  It’s really cool to get that response from where you’ve come from. I know I haven’t been there for a while but I’m no less Canadian, you know what I mean? This is where my life ended up bringing me, you know, to take care of my family and do my job. But I’m still a Canadian at heart, and I just love all the support.”

When he isn’t training, he runs a thriving business in Las Vegas called The Sweat Store (Las Vegas’ first Fitness Apparel Boutique,) which opened earlier in the year, which is where we closed the interview.

“It started while I was talking to my wife,” said Alessio. “We were looking for some kind of thing to do, or something for me to do since I’m going to be done fighting soon, and we started to think of our Plan B – A business of some sort. So we looked around at what Vegas was missing, and what it needed and we came up with this idea. It’s really taken off, and I feel so blessed that it’s going so well so early.”

If you’re in Las Vegas, The Sweat Store is located at 9809 Flamingo Rd. Suite 6. Las Vegas NV, 89147.  Find them online at TheSweatStore.com, or on Twitter @TheSweatStoreLV