Every week should have a happy ending. Luckily for those of us in Vancouver, Fortune Sound Cloud gives us Happy Ending Fridays each week. Each week, a special guest DJ is joined by a strong roster of resident DJs in the Chinatown club. On Friday the 24th Montreal based DJ & producer Hatchmatik was getting top billing. I had the pleasure of talking to him before his set. Here is what went down.

The thing about interviewing a musical performer before their show in town is that you need to be ready for last minute changes to the plan. As a pleasant surprise to most, there was a lingerie fashion show going on before the Happy Endings Friday at Fortune. With any fashion show comes the backstage wardrobe/makeup/hair/drama zone. This meant that the artists green room could not be used for the interview. Since I needed to have a smoke, we went outside the club. Like most Friday nights at Fortune, it was packed outside with people lining up to get in. We went around a corner and into an alley. This alley was just off Main St, between E. Hastings and E. Pender. But hey, you play the cards you’re dealt.

Hatchmatik’s career has had a long evolution to be where it is today. Going from a bboy to a touring DJ. I had to ask him what is next. “My next project is with the guy I have dj’d with the most over the years: A-Rock. He is the other original Peer Pressure DJ. We are working on a new stage show with lights and video”. I have seen this addition of live video to their set with other Montreal DJs like Grandtheft from the Eh’ Team. I wanted to see if Hatch had something else up his sleeve. “What we are doing is a bit different. Whereas a music video is for a specific song – we are creating motion graphics and lights that are synced to the music but not necessarily song specific.

“To be honest, it has helped since Adam works for a company called Moment Factory. They do a lot of large scale video and lighting projects. They did the Super Bowl XLVI Halftime show, they did the Celine Dion show in Vegas, they did a Madonna tour after she was in the Half Time show. We are looking to workshop with them and benefit from their experience and resources. Nothing is set in stone just yet. ”

Being that he was a bboy, I wanted to know if Hatch breaks out the moves on stage from time to time. “I do but I keep it behind the decks.” Having gone from dancing to someone elses music, to making his own music to get the people dancing, I had to know what the process was like making a new track. “Coming from a dance side of it, I want to make music that has me dancing in my studio. If it makes me really want to dance I feel that will be a starting point for where I’m trying to take the show.”

At this point a garbage truck rolled by in the alley.

Since he was from Montreal I asked Hatch what are some things from home he misses “Just my friends. These last few tours I’ve been on my own. I was thinking about it today on the plane. I was thinking about other people who work exclusively in a duo format not people I have worked with – and just missing touring with the other Peer Pressure dudes – mainly A-Rock – hence our new stage project.

“Man traveling alone is taxing on your cell phone battery. I’m either telling people back home about funny shit on the road. Trying to interact on twitter with fans in the city…or” As this happened a girl came up and asked “Do you guys mind taking a picture for us?” We agreed with the young woman’s request. Here is the result. 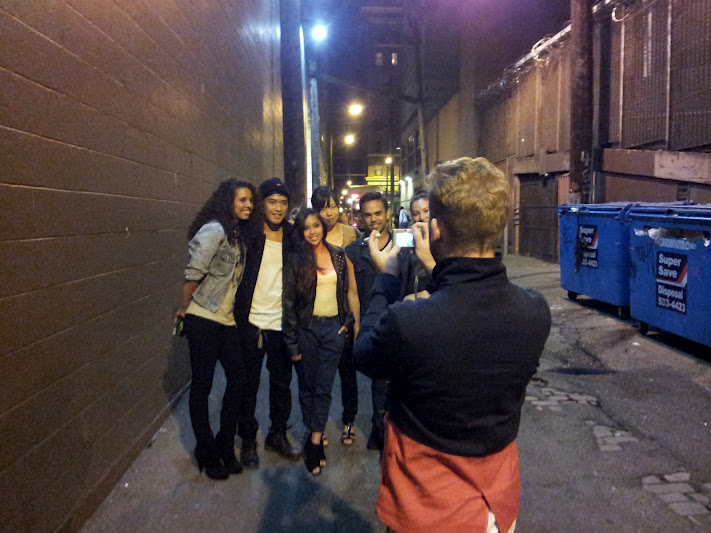 He will take your picture now. Later tonight you'll want a picture with him.

Again, you gotta play your hand.

We laughed off the scenario, then got back to talking. I asked “Since you are seeing a good part of Vancouver here tonight,  what are the cities you will be playing at coming up?”  “I was in Winnipeg last night, now I’m here, I play Calgary tomorrow night, then home. Oh, I’m going to play a lesbian wedding in New Hampshire.” Sounds like a good couple of weeks to me, I joked. “Yes. Then the Peer Pressure party at TIFF at The Drake Hotel. They have a 4AM license that night. Those are always fun. The big one coming up is the Peer Pressure 7 Year Anniversary on September 14th at Club Lambi.”

With a busy fall ahead of him, we can only hope that he finds a way to get back to Vancouver. If you were at Fortune on this night, you know EXACTLY why.