You may have heard of pop-R&B group soulDecision, popular for their hit single “Faded, but have you heard of North Vancouver-based dance recording artist Trevor Guthrie?

Long past are his days as the boy band’s lead singer; now the 41-year-old is back and hauling in awards for the massive dance hit with Armin Van Buuren “This is What it Feels Like.” So what does winning a JUNO this past weekend feel like for Guthrie? Well, nothing short of vindication.

During our interview he mentioned that if he was a superhero he would want the power to be invisible, and I couldn’t help but think to myself, “that’s exactly what you have been, my friend.” It’s time to walk into the light and claim what’s yours.

Nothing to hold but the memories and frames
Oh they remind me of the battle I face
without your love, without you I drown
Somebody save me I’m going down 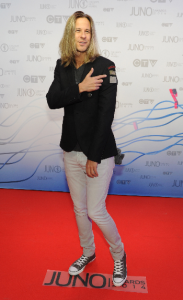 For Guthrie, the lyrics are more than just words on paper, or road signs to his redemption. Instead they represent a fading light that cast him into darker times before illuminating his future. “A friend of mine got diagnosed with an inoperable brain tumour and he had seven weeks to live. At the time I was hearing comments from his kids and his family, so I took the chords that were sent and I just sat at the piano and ‘nobody here knocking at my door’ was the first line that came out.”

Armin loved it, produced it, shot the video, and put it out. Now everywhere in the world people know it and sing it. The voices of thousands of strangers echoing all that he has gained in exchange for all that he has lost.

“I feel guilty sometimes, I mean I’m getting Grammy nominations, winning a JUNO, and having such big success, and yet my friend has passed away,” says Guthrie. “At the funeral it was very emotional, they played the song, and you know the lyrics to me, every time I sing them I know where every lyric came from, sometimes it’s hard to put that to the back of your mind.”