It’s no secret: Charlie Ross’ One Man Lord of the Rings was one of the best-known breakout hits of the Vancouver Fringe Festival. So it’s little wonder that Fringe is bringing back the show as part of their year-round The Fringe Presents encore performances.

Charlie Ross hurtles his way through the entire Tolkien trilogy – The Fellowship of the Ring, The Two Towers, andThe Return of the King-recreating the magical world of Middle-earth and all its enchanting characters. In 3600 seconds, Charles completes Frodo’s epic journey from the Shire to the fire-armed with nothing more than a pair of elbow pads and his outrageous imagination. If you’ve seen the movies or read the books you’ll love Charles Ross’ One Man Lord of the Rings.

I called up Charlie with a few questions on life after fame, and what we can expect from him next.

OMLOTR is really about letting go of inhibitions and letting out Charlie’s inner geek. Charlie tackles Tolkien’s work from a literary background, selecting choice bits from both the film adaptations and the novels as his reference guide. It sounds like he’s done his due diligence to appeal to new converts and hardcore audiences alike, which is key when you’re channeling something so well-known and beloved. 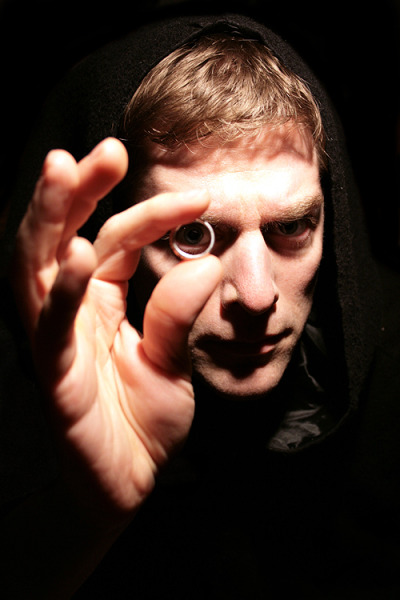 Charlie has toured some pretty exciting places over the past year, including Sydney, England, Ireland, and Hong Kong. What’s struck him the most is how the films were so successful in breaking down barriers and extending “nerdism.” The source material is a “passport of reference” for him, and while the humour is decidedly Canadian, he needs to make small adjustments to every audience and culture. We laughed over how the Irish seemed to be slow on the uptake of Canadian humour. Must be all those late nighters.

OMLOTR is hitting Japan next, as well as Atlantic City, New Jersey. There are talks of going to Vegas with both shows. Time goes by fast when you’re doing what you love; Charlie has been touring his One Man shows for thirteen years now. He’d like to setup shop somewhere permanent for a while. I asked him whether he gets bored of the same routine every night, but Charlie is still in love with what he does. He still has hardcore nerdism for the source material, and says that the more tedious aspects of his work are like the “commute to work” – the minor annoyances that a performer has to deal with in order to get on stage.

He’s just not sure. It sounds like pieces of future One Man shows may have been tossed around, but Charlie believes his adult cynicism is getting in the way. He fell in love with Star Wars and LoTR when he was a kid, but has a problem with taking things at face value anymore. He gives the example of the shootings at the Batman movie premiere as an example, an incident that seems to have very much affected his personal experience with the series.

Charlie is also working on writing his own TV series, though he wouldn’t give me any details.

One weird reason why

Charlie cites the infamous quote from Sir Ian McKellen, but with one additional sentence that the publicists usually leave out:

“If you liked Lord of the Rings, you’ll love Charlie Ross version.”

“If you didn’t like Lord of the Rings, then at least Charlie Ross’ version is shorter.”

Or something to that effect. Don’t miss out.

One Man Lord Of The Rings plays for four nights only February 6-9, 2014 at the Waterfront Theatre on Granville Island. Advance tickets here.