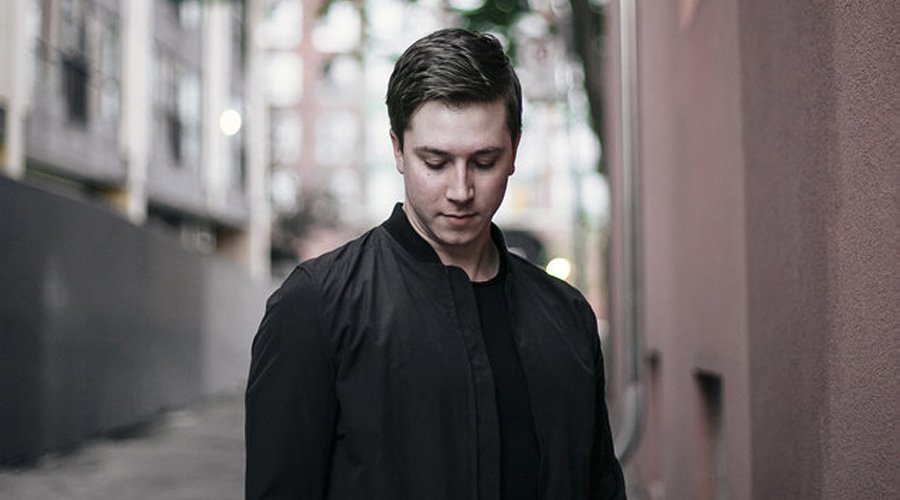 First gaining popularity in November 2014 with his remix of deadmau5’s “Aural Psynapse,” Attlas was initially rumoured to be a mysterious side project of deadmau5 himself.

Later revealed as Toronto-born producer, DJ, and classically trained musician Jeff Hartford by Pete Tong, Hartford went on to sign as a solo artist to mau5trap and continues to produce his own unique style of electronic dance music.

We recently had a chance to chat with Attlas in advance of his upcoming Calgary and Vancouver shows to talk about his uncanny musicality, production process, and favourite film scores of all time.

Hey! My name is Jeff Hartford, and I enjoy the privilege of writing, recording, and releasing [music] on mau5trap.

Out of all the electronic music labels you could’ve reached out and eventually signed to, you decided to go with deadmau5’s label mau5trap. Was there a specific reason as to why you wanted to do this?

deadmau5 is the reason I’m into the dance side of electronic, plain and simple. When I first got exposed to mau5’s work, I was involving myself not just in music education from the perspective of writing and arrangements, but from the technical and engineering side as well.

It opened up an entirely new well of inspiration and lessons from which I could [pull from]. It was a label with a reputation earned through its history of output, quality, and diversity that constantly pushes itself to improve on [the] cornerstones of both musical and technical ambition.

I’ve noticed that a lot of young producers coming up right now are incredibly musical and know how to play multiple instruments, including yourself. Why do you think this is?

I have a feeling that’s a result of electronic music becoming so popular in more mainstream spaces. All things being equal, as a generation takes to music production and creation as a hobby [then later evolving into] a serious pursuit, it’ll be the ones who have the additional musical background that will gain the edge.

I definitely found that my history inevitably informs my present and future, musically. A lot of the intervals I use in my melodies are specific to the result of jamming away on an instrument. It’s not necessarily easier or more difficult than using a piano roll; and who’s to say if the results would be drastically different if I wrote the other way?

As a result though, I tend to jam a lot while I work. With remixes too, it’s often a matter of looping a 16 bar phrase from a key vocal or melodic element and playing with or underneath the “lead” with a rhythm instrument or patch to find the most harmonically pleasing and mood specific tempos and chord progressions.

I read that you start almost every new song that you write on a piano. While a great way to develop a new melody, do you think this technique would ever limit you in any way?

I’m sure there are definitely limits to any means of production or creativity. I do try to play catch up frequently though; work on new sounds, effects, and means of achieving narrative or musical elements technically.

I’m fortunate enough to live in a time where there are amazing things happening in every genre. Every bit of software, every instrument – there’s never a lack of innovation happening. I’m still a big fan of using sounds that traditionally playable instruments cannot generate – that’s the beauty of electronic music.

The best magic for me personally has come at the beautiful intersection of the two worlds – here’s a re-processed and re-sampled piano line that’s now blurred together to give a smeary pad. Or here’s this guitar pedal manipulating a print of a synth line. It’s a blast to get these indulgent moments of sheer play and experimentation, even better that I get to call it work!

While you’re generally known as a very private person, you didn’t have a social media presence or photos of yourself up as an artist or otherwise for a long time. What made you change your mind on the whole social media thing?

It was more about feeling comfortable that what I was doing was using it as a platform to share my music, not myself. I didn’t wanna hang a pretty sign over an empty store, you know? If I’m going to be engaging and interacting, I want to do so with music as the bedrock for the interaction, not the other way around.

And fairly, without dressing it up in metaphor, I probably had to get over some shyness – I didn’t even start using a smartphone until this past April! I still find it humbling that that I get to have conversations and share stories with individuals around the planet through the music I write from this little chair in Canada – it’s a perspective I’m glad I opened my eyes to.

Before you started making music, you interned for film score composer Trevor Morris. What made you want to switch over from film scoring to producing dance music? What are some of your favourite movies scores of all time?

It’s a neat little story. I had received the contract and was looking very much forward to taking the traditional LA film scoring path from assisting, to “additional music by,” to indie project, and eventually earning the right to writing expansive and immersive music set to picture.

While back across the border in Canada waiting for the legal and financial paperwork to take its time in processing, I focused on learning what made electronic music production different in a dance context than the way I had been using it for score work. A wonderfully generous opportunity to learn and grow with mau5trap presented itself, and the possible adventure ahead of me on that road was too interesting to turn down.

I was confident [that] I could work again in a studio, but the chance to release original music and learn from one of the most fascinating producers and personalities in the industry was one I wasn’t sure any reasonable person would decline. So, a few skinned knees later – here we are!

As far as favourite movie scores of all time go, that’ll be a really tough one so I’ll just list five off the top of my head that are favourites and frequent listens of mine: The Master, The Firm, The Revenant, The Shining, and Moon.

What can people expect from your sets in Calgary and Vancouver this weekend?

I’m looking forward to sharing new music, new edits, and a chance to connect with a part of the country I don’t see nearly enough. I’m aiming for that balance between energy and musicality – I’ve been itching for an opportunity to play this new Matt Lange remix I just finished. I’m [also] really excited to see what kind of damage the mau5 collab “Bad at Titles” can do on these club systems.

What else are you working on for the rest of the summer?

We’ve got some amazing opportunities at festivals like Veld and Nocturnal Wonderland, and the big mau5trap vs PRYDA stage at Tomorrowland. Tomorrowland is a dream weekend just as a fan of the music – I can’t wait to take in those gnarly b2b’s that are going to be once in a lifetime treats for anyone lucky enough to get eyes and ears on them live.

On a smaller scale, I’m hoping to track down a few key pieces of gear that I want to try using in at least a studio environment, live if possible. I’ve got dozens and dozens of partially completed tracks that need the final ingredients, and I’d love to explore more non-traditional ways of sharing and experiencing music.

Then there’s the ever-growing list of books I’d like to get to, recipes to try, music to catch up on – let’s see if we can’t squeeze a couple Jays games in there too!

Catch Attlas this weekend in Calgary on Friday, July 8 and in Vancouver on Saturday, July 9.