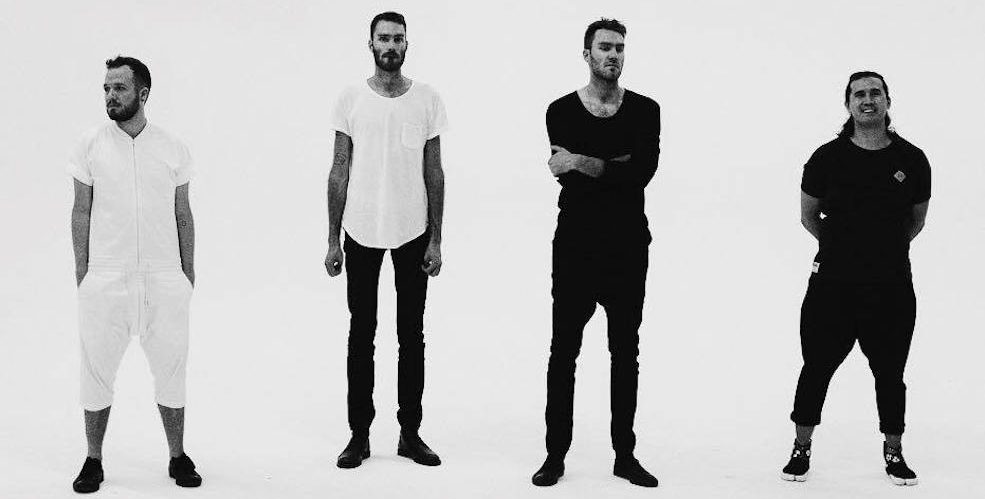 “Have you read that book, The War of Art?” Ian Bevis, singer and primary songwriter for electronic group Bear Mountain, asks. “It’s written by Steven Pressfield. It’s really good, but it’s all about creativity and just how you just have to be there to catch it. It’s gonna come, you just gotta be ready for it.”

Not that creativity is something that has ever really been a problem for the Vancouver four-piece, which also includes guitarist Kyle Statham, drummer Greg Bevis (Ian’s twin brother), and creative director Kenji Rodriguez — their 2013 debut album, XO, was critically hailed for its spanning spontaneity, with its fusion of jazz, orchestral pop, and house that made for abstract and infectious instrumentations which felt both nostalgic and contemporary.

Bear Mountain’s newest single, “Give It Up,” from their forthcoming sophomore effort, Badu, further showcases their inspired dexterity, with its joyous layering of summery grooves, whistling melodies, and soulful vocals.

Still, being ready to catch those fleeting moments of imagination is something that Bevis has taken very seriously in his development as an artist over the last few years. In fact, he prepares for it by doing his daily “morning pages” — setting aside a prized few minutes every day to simply put pen to paper.

“Every morning, I just set my timer and just write,” he says. “It’s mostly stream of consciousness stuff and the next day I’ll go back and read it and anything that’s good —I have this Google Doc — [I] put that in the Google Doc and it’s just there.” Then, when it’s time to write a song, Bevis has a treasure trove of material to source from. “It’s more just the consistency of doing it everyday and then you have something to look back on. So, that’s been helpful. [Using] consistency to your advantage as opposed to trying to force creativity in the moment.”

Indeed, honing his skills as a songwriter has been much of Bevis’ focus for the new record. XO, he says, was written without the expectation that anyone would ever hear it. For Badu, Bear Mountain set out to challenge themselves and really write songs — “songs with a melody and good lyrics,” Bevis maintains — with the intent to outdo themselves each day. “It changes things,” he continues, on being conscious of the fact that people would hear the music this time around. “I think a lot of it was dealing with that and recognizing that and obsessing over that and, ultimately, letting go of that.”

Writing with others, too, has been productive for Bevis and, in September, he had the opportunity to travel to Toronto to collaborate with Nelly Furtado. The track they ended up scripting together, “On My Own,” will appear on Badu. It was, as it happened, another one of those capture-the-creativity moments — they’d spent the morning playing guitar, pouring over their notebooks, but nothing was sticking. Then, a couple hours before Furtado had to leave, inspiration hit. “I just started going through my computer, going through some little production beats I had, and one just kind of struck us and we just wrote, wrote, wrote. Wrote lyrics in, like, an hour and quickly sung a scratch vocal and that was it. It was one of those things, that morning I was like, ‘please!’ You just hope you catch it, you know? And we did, so it was good.”

It’s a gift, Bevis maintains, to be able to work as an artist and do what he’s most passionate about. It’s certainly not something he takes for granted and, as such, he’s on a continual quest to improve himself — to push his boundaries and exceed his own expectations. “It’s also allowed me to look at my life and the way I do things and be like, ‘okay, so how do I tune everything in order to be more creative and make better art?’” Bevis says. “So, that’s been really good for me, in all facets of my life.”