Earlier this week, local photographer Alexis Birkill captured a rare photo of the International Space Station streaking across the night skies of Vancouver.

Here’s his explanation of how he photographed this stunning shot:

After photographing Point Atkinson Lighthouse on Sunday evening, I decided to stay out and do a little bit of star photography, despite the moon being quite bright.

I subscribe to NASA’s ‘Spot the Station’ service, which sends me an e-mail whenever a particularly bright pass of the International Space Station is scheduled to occur over Vancouver. These occur shortly after sunset or before sunrise, when the station is still lit by the sun, but the sky is dark. This pass was also very high overhead, reaching 81 degrees, so this seemed like a good opportunity to grab a photo. (Incidentally, this seems to be one of the few NASA services that the US government shutdown has not affected!)

The ISS passes from west to east, so I wanted a location with a clear view to the west. For this shot I headed to a new location, a small piece of easily-accessible coastline between Horseshoe Bay and Lions Bay. I’ve yet to find a centralised directory of these, so I spend rather more time than I should on Google Street View, looking for evidence of these tiny, yet almost always well-maintained, coastal access points, and marking them for future visits.

I don’t usually head to new locations for the first time when it’s dark, as it’s hard to get an idea of good compositions, but even after getting back to the car from Lighthouse Park and driving to this location, there was still some light on the horizon, so I headed down the steep steps to the coast.

As the last of the sunset light was still strongly visible in the sky, I also decided that this might be an opportunity to try a new technique, where a post-sunset or twilight shot is blended with a night sky shot, to give the sunset colours and light on the horizon, combined with the stars of the night sky. Of course, never one to make my life easy, I decided to jump straight in the deep end and do this as a panoramic shot.

Accordingly, this shot consists of a number of different photos at different times, blended together. I started off with a 5-photo post-sunset panorama, which gives the glow on the horizon, the reflections on the water, and the clear definition of the distant hills, taken at about 7:20pm. I then captured a 90 second bulb exposure of the International Space Station streaking across the sky, at 7:51pm. Then, at 8:30pm when it was truly dark, I captured another 5-photo panorama of the night sky, to capture the stars, and finally, after scrambling over the extremely slippery rocks, I took a shot that included me, lit by moonlight, looking in approximately the right direction.

Of course, in between these shots I was unable to move the tripod, so I spent most of the intervening time wishing I’d brought a warmer jacket!

After this, it was merely a case of stitching and aligning all the panoramas and individual shots so they lined up perfectly, and then using masking and the lighten blending mode to blend the shots together into this final image. 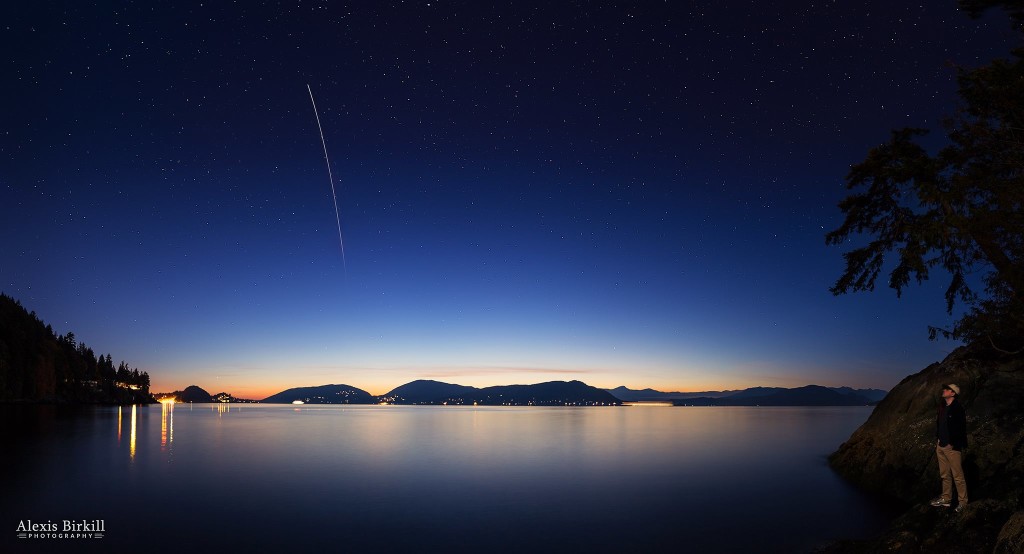