What are the tell-tale signs of spring? Well, the obvious ones are the longer days, unpredictable weather, and hell on earth for allergy sufferers. While winter tests everyone’s tolerance for the cold the transition into spring tends to act as that last little test of perseverance before the much anticipated, sun soaked fantasy called the summer. So why do we love the spring so much? Most likely the first thing we think about is beauty. Everything is in bloom and suddenly it seems the city is more populated than you remember it being over those snowy months. Bicycles seem ubiquitous, everyone seems more determined to get in shape than they “promised” they would on New Years and, great Scott, the opposite sex becomes much more apparent. I submit though that the real poignancy of the spring is as deep as it is beautiful on the surface. Spring is the season of new potential.

Everywhere you look the world is radiating potential. As we emerge from our emotional hibernation we find ourselves in a much sunnier disposition. The town is rampant with optimists. Go out today and smile at somebody randomly. You’re bound to get a smile right back, and who knows? Maybe more. Should you experience the latter here are some inspiring things that may sway them ever closer to you. You can thank me later. 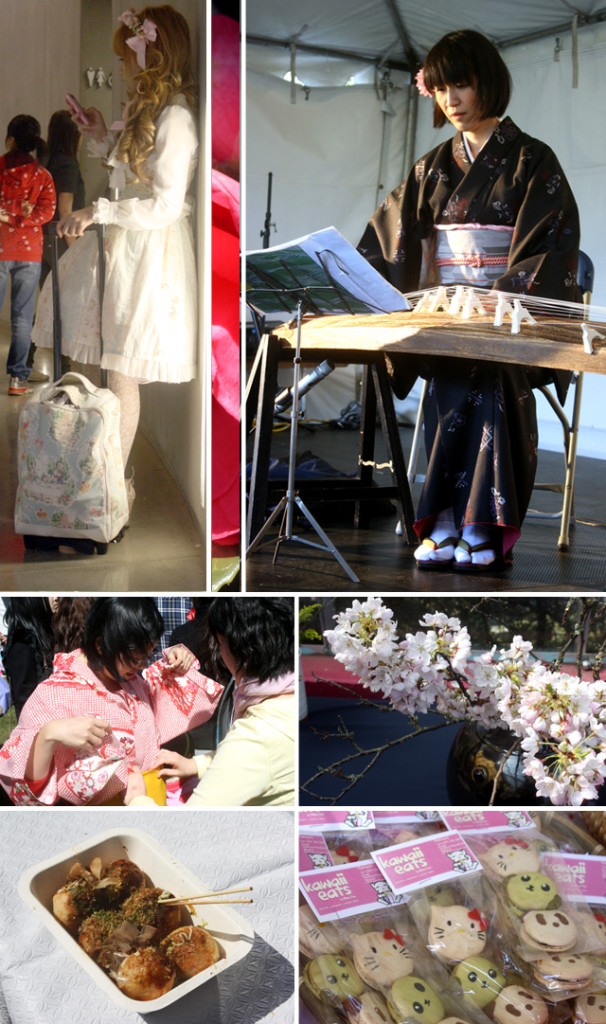 The Vancouver Cherry Blossom Festival is in full swing. I got to visit the Van Dusen Botanical Garden for Sakura Days Japan Fair. A really convenient way to learn a lot about Japanese culture via my stomach. There were endlessly long lines for food so that aforementioned patience is useful. Fortunately it payed off. I scored some takoyaki and had a chance to head over to the main stage in time to experience a great koto set by Kozue Matsumoto. Her characteristically Japonesque demureness was counterbalanced by her mastery of the instrument and the passion boiling just beneath the surface, betrayed, ever so subtly, by her facial expressions and body language. The audience, and, very notably, young and otherwise noisy children sat enthralled throughout her set. If spring ever needed a theme song it would be great if it went something along the lines of what I saw and heard that day. I’ve long been an admirer of Japanese culture. Their relentless attention to the smallest details drives so much of what Japan was, is and will be in the future. Luckily there are still plenty of opportunities to seek out a similar experience. Visit this link for a handy list.

One thing that makes me happy is how design is inextricably linked to the food and service industry. If you look at my portfolio and other blog posts you might notice a trend in items that definitely fit within those fields. If I wasn’t a professional designer I’d have been a chef. I find that most good designers have another passion that runs in parallel with their design. I like to design taste experiences and serve them to those closest to me or share on Twitter. A good pro chef gets the best of both worlds. He or she can prepare things that he cares about and serve it to a wide audience. It beats drooling over an image any day. And, similarly, their output is subject to everyone else’s input; meaning that they have to be true to themselves and their product in order to win over the people.

Enter the new wave of young entrepreneurs who always seem to be opening sensational new eateries in hip neighborhoods around Vancouver. It’s fitting really. I’d even go so far as to say that Vancouver is best exemplified by the spring. More and more bold individuals are collaborating with each other and defining what this place is all about. In short order this city will be more known for it’s enterprising spirit instead of the usual things like rain and yoga pants. These motivated people get it and the proof is already making itself apparent in the multitude of success stories arising in Gastown with places like Nelson the Seagull and Meat & Bread, Chinatown/Strathcona with Bao Bei and Harvest; and now, it would seem this trend is beginning to make its way over to Kitsilano. The man behind the soon-to-be newest spot on 4th avenue is Trevor Bird. 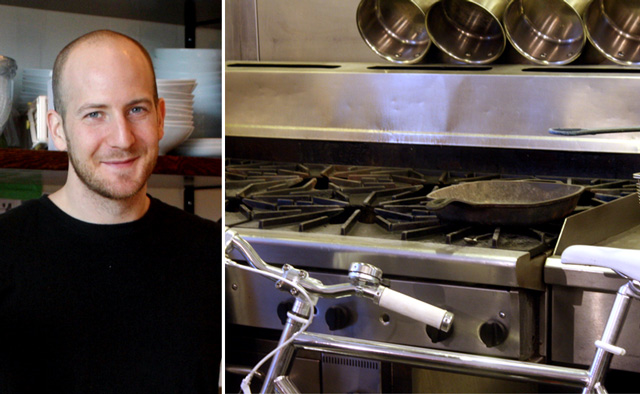 Does the name ring a bell? Well, if you’re watching the current season of Top Chef Canada you will recognize Trevor “T” bird as the young, blue eyed chef from Montreal with a mission to help define and redefine Canadian cuisine. I had an opportunity to pay him a visit at the site of his new restaurant venture, Fable (Farm to Table) on 4th and Cypress. I met him while covering the opening of Harvest for my blog last week where Trevor acts as Executive Chef.

After I was done at Van Dusen Garden I biked over to Kits to meet the man again. I had to search for Trevor amidst all the lumber and drywall and busy workers buzzing about. When I found him he was in the thick of renovating the kitchen area. He greeted me with rubber gloves and a broad smile. We sat at the shell of what will be the open concept kitchen and we began to talk.

Ryan: How did we end up here?

Trevor: I’m originally from Montreal. I moved here four years ago because I didn’t know where I was going. Stayed for a week and never left. I was in Peru right before here, then I was going to work in Tofino but that didn’t work out so I came to Vancouver and I was going to go snowboard in Banff for a season. I stopped off here and got a job at Lumiere during the Rob Feenie to Daniel Boulud transition. I worked there for a couple of months then I went to Market at Shangri-La and now I’m here.

Ryan: Where did the seed of Fable grow from?

Trevor: It took being away. I’ve always know what I’ve been really attached to and just needed a push in the right direction on how to get there. I’m passionate about local foods, about sourcing your ingredients property, and knowing where your food is from. That’s huge on my list of priorities. I think doing Top Chef and cooking with so many inspiring chefs definitely helped define it even further and really nail down what I wanted to do.

Ryan: What similarities are there between Harvest and Fable?

Trevor: [In both concepts] the menus heavily support urban farmers and being able to see a face behind the food and feeling good serving it. I’m strongly against factory farming and mass produced ingredients where money is seen as more important than quality.

Ryan: What kind of dishes should we expect?

Trevor: Good, honest Canadian food that, within a generation higher or lower, we all grew up with.

Ryan: How do you define Canadian food?

Trevor: This is what Fable is going to help do. It’s a movement to help define Canadian cuisine. You say shepherd’s Pie, pogo, potato skins.. They’re all super comfort foods that were delicious growing up with as Canadians. Fable will have things like that but with modern twists and a chef’s take on it to make it a bit more interesting.

Ryan: What else do you think will make Fable stand out?

Trevor: I like to think we have a team of highly trained cooks and passionate people. I think we have a super knowledgeable and inspirational team. With the open concept kitchen I think it’s about training your cooks to be chefs; to be owners. It’s not for every cook and chef. But it’s definitely essential to take that step if you want to run your own kitchen one day.

Trevor: Right. I want everything to be transparent, and for cooks to take pride in their work.

Ryan: Tell me about who designed this space.

Trevor: We got these three girls from VCAD. I told them what I wanted and they put together some awesome sketches. I approved it so that’s what we’re rolling with. The interior concept is kind of like an old school farmhouse; exposed brick, posts and beams, big old butcher shop lights, mason jars, deep reds and grays.

Ryan: Anything we should be looking forward to on the menu?

Trevor: I don’t want to say anything specific at this very moment. I really want to get in this kitchen and lock it down. But I will say brunches are going to be really fucking good. I’m pretty stoked on that. Brunch is my favorite service to cook.

Ryan: Finally when do you plan to open>

Trevor: It depends. If you ask my partners we’re looking at early to mid may.

Passion breeds potential and Trevor and his staff have it in spades. Everything about Fable is a product of enthusiasm. Nobody is there just to make a buck. The people I met at the space were all having a grand time. The VCAD students (Sam Wilson, Sandra Bravo, and Yvonne Tse) were not in it for the money either. Bear in mind this interview happened on Saturday over the Easter weekend. Where some might want to spend a long weekend doing anything but work, others prefer to keep plugging away. Why? Because it’s not work if you love it.  I can honestly say that nobody there looked like they were working. And I expect this will continue in May and onward. My curiosity lies in rediscovering what Canadian food looks and tastes like. I’d wager that for a reasonable price I might also get to discover what inspiration tastes like. When that time comes you can be sure I’ll be there to witness the fruits of this endeavor. And I hope you do too.

Keep your eyes on this column for more weekly in depth design editorial and an update to this story when the time comes. Good things are in bloom. It’s a great time to be in Vancouver. Until next time…