It’s true that when I read things like ‘an exciting adult oriented evening’ my mind may get a little ahead of itself; and perhaps my expectations for the late night opening of the Vancouver Aquarium this past Friday were a little outside the realms of reality, but despite the initial surprise that I was the only one with her party frock on and the DJ’s and appetizers were little more than some slightly louder than usual background music and a few tasty snacks being served at rather lengthy intervals I am happy to say that I thoroughly enjoyed my night at the Aquarium.

It’s a simple idea really. For one night only (apparently something planned on a quarterly basis) the Vancouver Aquarium hosts an ‘adults only’ evening, where you get to explore the space and the wonderful exhibits without a slew of screaming children and over zealous school group leaders herding their troops about, in efforts to ensure that none of the little mites are lost amongst the jelly fish or dropped into the shark pond.

The ambience, as I already alluded to, was not exactly what I had expected – but amongst the pleasant company of friends I was able to enjoy my first exploration of the aquarium. The highlight of the evening for me was sharing a beautiful moment of solitude with the dolphins, who were clearly excited to interact with these strangely dressed humans beings on the other side of the glass. A close second was quietly watching the beluga’s silently gliding through the darkened waters of the night, like ghostly apparitions. And for the more interactive amongst us the wet bar was open for business offering the opportunity to get our hands dirty and wet, playing with anemones and sea cucumbers.

Being married to a man who is seemingly allergic to line-ups I did not partake of the tarot card readings or cartoonist impressions being offered (for obviously reasons), but I did somehow manage to persuade him that the brief wait for the 4D Experience would be worth it. In just 15 minutes we were taken on a journey under the ocean and experienced not only the sights and sounds but also some of the physical sensations associated with aquatic life. I’m sure the audience responses were somewhat accentuated by the alcoholic beverages that had most likely been consumed at one of the cash bars set up to cater to the event, but it definitely seemed at that point in the night that a good time was being had by all.

Immersion may not have been the evening of social elegance that I was expecting but this was indeed a night to remember, and if and when they do it again, I would definitely recommend it as a fun way to start the weekend. 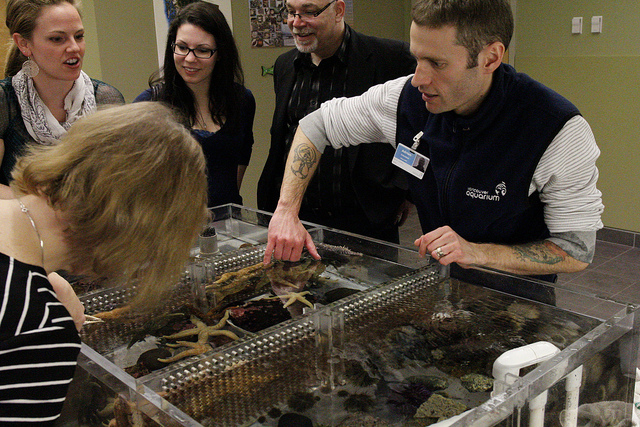