I went to the Samsung Consumer Electronics Roadshow for a sneak peak of their upgraded 2012 Smart TVs and handheld devices.  Frankly, I don’t think the way we interact with the television will ever be the same again. Samsung has made your home entertainment system simpler to use than ever by turning your cellphone or tablet into a universal TV controller, adding a microphone and camera directly to the TV, and integrating user friendly, network connectivity.

Picture this. You’ve left home but forgot to PVR the hockey game and you won’t get back until the first intermission. Your work friends are all coming over so they’re depending on you. Samsung’s Convergent Technology will let you start the recording from your office by accessing your TV from your cellphone or tablet.

Afterwards, you get home and start the game  on the TV in your kitchen so you can crack open some beers. You and your friends move the game fluently to the living room during a commercial via Samsung’s “All Share” Network without missing a beat.

The game is tied and you’ve run out of beers. You need to make a trip to the garage to grab more, but you don’t want to miss any of the game. So, you take the game with you by utilizing your cell phone or tablet’s  “Smart View” technology, and watch along the way with only a half second delay. However, your friends in the living room want to turn up the volume but can’t find the remote. No problem, your girlfriend uses the Smart TV’s voice command feature to turn it up. Though, she could have even used motion control commands, since she has a user account and the TV’s facial recognition program recognizes her.

The game finally catches up to real time, late in the third period. During commercials you bring up your twitter account to see what’s trending. This is all available through your TV via the Smart HUB’s feature, “Social TV”. You quickly tweet something witty about Luongo by using your Samsung Smart Phone as a wireless, QWERTY keyboard specifically for your TV. 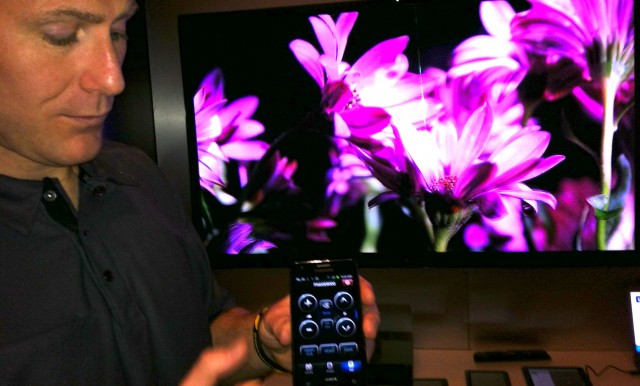 Don’t worry; multitasking between programs won’t slow you, your TV, or it’s menus down. 2012 Smart TVs now use Dual Core Processors that allow you to do more things simultaneously than you ever could before, without affecting your experience.

After the game you show off your TV’s new 1080P 3D feature and how significantly clearer it looks than its predecessor. Your friends don their slimmed down, cheaper, 3D glasses together, as you cruise through the online content. The list of movie trailers, documentaries, kid shows, movies and music will grow every month, says Samsung.

Your friends taunt you and say you probably won’t need to upgrade your TV any time soon. They notion that the TV’s operating system will miss the updates that come with buying a newer TV a year from now! You re-assure them that as Samsung continues to improve the user experience, you can purchase Smart Evolution Update Kits and install them via a port on the back of the TV.