What started as four Saskatchewan women’s call to remain idle no more on issues revolving around aboriginal treaty rights, particularly Bill C-45, has charged into a movement that has grabbed this country by its shoulders and bolstered its awakening, and it’s showing no signs of letting go.

January 28 is the planned day of global protest for the Idle No More movement if the government shows no signs of rescinding the controversial bill. Word on Twitter indicates protests and demonstrations are planned for Wednesday across the country in response to an unsatisfactory meeting between Stephen Harper and the Assembly of First Nations.

Last Friday’s demonstration in Vancouver saw protesters marching from East Vancouver to City Hall and then continuing later in the day on the corner of Robson and Burrard streets where they blocked rush hour traffic.

Demonstrations are expected to escalate as several chiefs have announced directing protests to an “economic breakdown” nature. In Edmonton, Chief of the Athabasca-Chipeweyan First Nation promised a blockade on a major highway leading to the oilsands and there is talk of a potential port blockade here in the west. Wednesday’s protests could involve blockades of several rail lines and border crossings throughout the country.

Of the bills under scrutiny, Bill C-45 leads the way and has largely been the focus of the Idle No More movement. It is an omnibus bill, a piece of legislation that packs together several issues into one single proposal and was quickly pushed through the House of Commons.

The most contentious issues in the bill concerns leasing of reserve land, amendments to the Indian Act, and it makes drastic changes to the Navigable Waters Protection Act.

Perhaps you have seen the popular meme in reference to the Navigable Waters Protection Act? 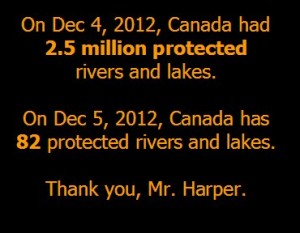 Actually, the Navigable Waters Protection Act applies to 2.5 million rivers and 40,000 lakes, and Bill C-45 reduces that to 97 lakes and 62 rivers.

The face of Idle No More, Chief Teresa Spence of Attawapiskat, further pushed the bill into the Canadian media spotlight when she announced her hunger strike on December 11, refusing any solid foods until communication between the First Nations, the crown, and the government commenced.

For anyone that assumed this is largely an aboriginal issue, many non-aboriginal Canadians have shown or voiced their solidarity with the movement citing that this is a Canadian issue. Among prominent Canadians who support Idle No More include Nelly Furtado, Margaret Atwood, and journalist and activist Naomi Klein.

On Friday, Klein announced via Twitter that she “respectfully declines in solidarity with hunger strikes and #idlenomore” the Queen Elizabeth II Diamond Jubilee Medal. Singer Sarah Slean and Council of Canadians chairperson Maude Barlow are also following her lead.

The Queen Elizabeth II Diamond Jubilee Medal was created to mark the 2012 celebrations of Queen Elizabeth II’s accession to the throne as the Queen of Canada. The medal symbolizes the Queen’s service to Canada at the same time honouring the contributions and services of select Canadians.

Chief Teresa Spence’s hunger strike sparked the grassroots movement and earned it mainstream attention. In just over month, journalists have done pretty well in covering every aspect of this reprisal. For anyone following this movement, or even tuning in occasionally, would agree that it certainly is a bumpy ride.

At the onset, Bill C-45 was brought to the forefront of Canadian issues. We felt despair for Chief Theresa Spence’s hunger. We have witnessed the government put off talks until after the holidays, leaked financial statements of the Attawapiskat nation identifying mismanagement of money, in-fighting between nations and chiefs – so much in-fighting, the myth of the crown’s presence during negotiations debunked, dissecting what exactly constitutes a hunger strike, the inauspiciousness of the Diamond Jubilee Medal as it was also awarded to 60,000 others – including Justin Beiber, and official provincial claims that the leasing of reserve land is actually in the best interest of the First Nations.

What happens when a grassroots movement gains momentum and picks up mainstream attention? Its message becomes distorted.

As Idle No More bulldozes forth, breaking ground, at times veering off course, suppressed by roadblocks, and then rerouting, it’s easy for one to lose their way. It’s difficult to understand which way to go, where to stand on issues, and who to follow.

However, at the very root of all of this is that omnibus bill that the current government tried their best to push through, limiting the hours of debate with the opposition. Treaty rights were amended which may or may not serve to benefit First Nations. But, they were changed without proper communication with the First Nations.

The vastness of this land, its forests, waterways, and landscape have been under the protection of aboriginal treaties for over a century holding corporations and the government accountable to how they use the land for economic reasons.

The treaties were an attempt to repair the major wrong-doings embedded in this country’s history. They serve as a partnership between the indigenous peoples of this land and Canadians. A partnership can only exist when both parties view each other as equals and act accordingly. Making changes to the treaties without going through the proper channels is insidious and reflective of the imbalance in this relationship.

In a democratic country, when the government does not act accordingly, its citizens have the freedom, and duty, to call them out. Often times, apathy atrophies the will and drive to take a stand. What we are witnessing now are the First Nations and Canadians choosing to remain idle no longer and call the government out. And they aren’t stopping anytime soon.