The sound of drums and chants reverberated throughout the vicinity of Thurlow and Melville streets on Monday as indigenous and non-indigenous people gathered in front of the Aboriginal Affairs and Northern Development building for the Idle No More Global Day of Action.

“Those drums are waking everybody up across the nation,” said Lisa Yellow-Quill, of the Battered Women’s Support Services and one of the speakers at the rally.

In conjunction with Canada’s MPs returning to the House of Commons on Monday, protesters rallied across the country and around the world to protest the fractured relationship between Canada’s government and its First Nations.

Hundreds of supporters along with Common Causes, an organization representing several groups including the Council of Canadians, turned out in Vancouver’s rain to express solidarity with the Idle No More movement.

Idle No More started in November and is calling attention to aboriginal rights and environmental issues, in particular the omnibus budget bill C-45. Among the proposals under fire in the bill are infringements to aboriginal treaties and the Navigable Waters Protection Act.

“In Vancouver we’ve had almost 30 Idle No More actions since December and it keeps continuing,” says Jerilynn Webster, 28, an Idle No More organizer and youth advocate, “I don’t see our people simmering down, I think it’s going to continue to go on until our people feel like we’ve been heard. The way it’s going right now, it feels like no one’s really hearing us, our leadership, the government.”

Webster says an Idle No More demonstration will be held at UBC on Jan. 31.

The following are photos from the Monday, Jan. 28 Idle No More Global Day of Action rally in Vancouver. 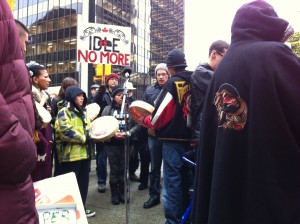 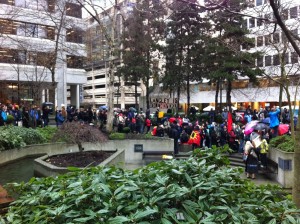 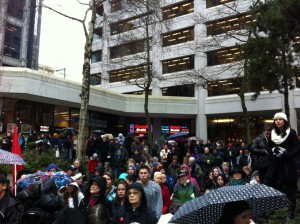 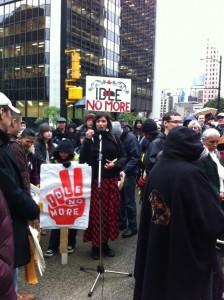 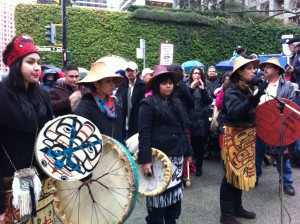 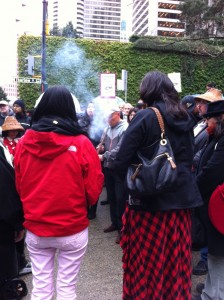 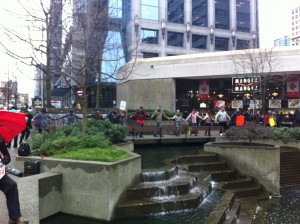