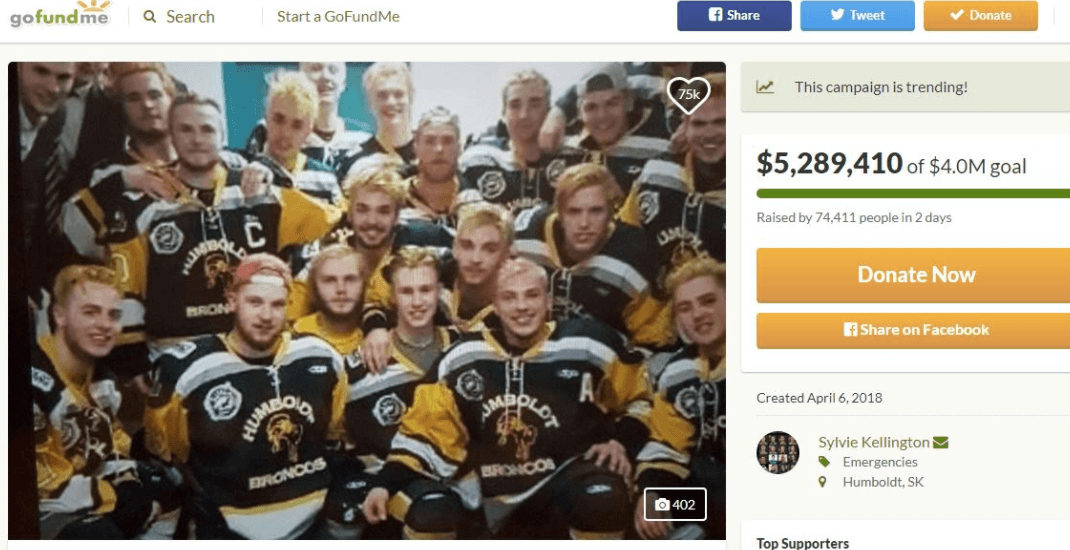 The GoFundMe page for the victims and families impacted by the tragic crash involving Saskatchewan’s Humboldt Broncos hockey team is quickly becoming one of the largest online fundraising campaigns in the world.

“The fund for the Humboldt Broncos is the largest GoFundMe campaign to date in Canada, and now one of our top five largest campaigns globally,” GoFundMe spokesperson Rachel Hollis told Daily Hive via email.

On the evening of April 6, a bus carrying players and coaching staff from the Saskatchewan Humboldt Broncos junior hockey team was hit by a semi-trailer.

The crash killed 15 people, including the driver. Fourteen others were injured.

Police say there were 29 people onboard the bus, which was en route to Nipawin for a Saskatchewan Junior Hockey League semifinals playoff game, when the crash took place about 30 kilometres north of Tisdale, Saskatchewan.

The campaign was started by Humboldt resident Sylvie Kellington to raise funds for those affected by the tragedy.

By Monday morning, more than $4.7 million had been donated by over 69,000 people in just two days. And at the time of publishing, the donations had reached over $6.2 million.

According to Hollis, funds have poured in from over 80,000 donors in 65 countries.

The Pittsburgh Penguins donated $20,000, while the Calgary Flames and Toronto Maple Leafs both donated $10,000.

On Sunday evening, a vigil was held for the victims at Elger Petersen Arena in Humboldt, the home of the Broncos junior league hockey team.