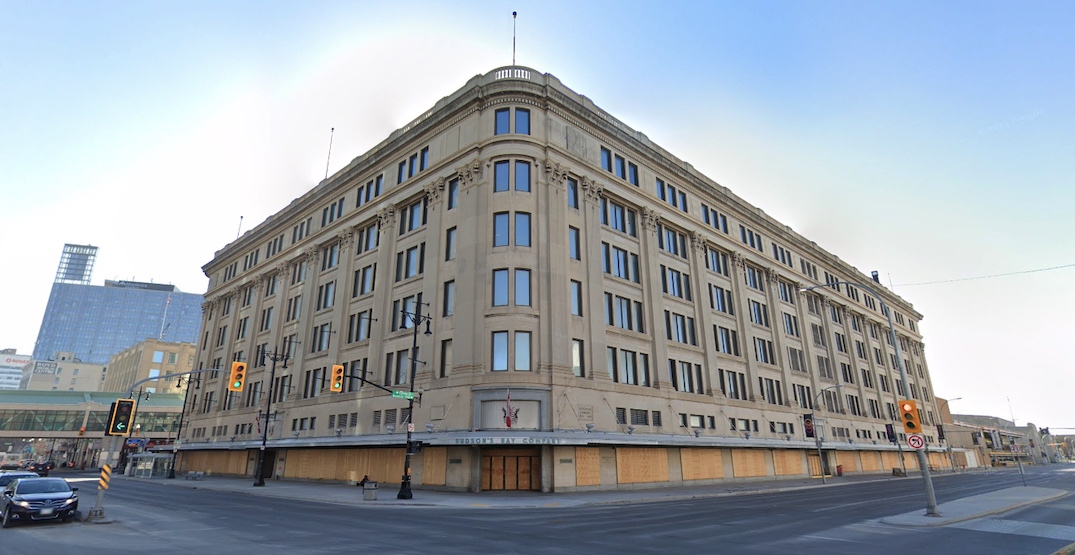 Under the ownership of the Southern Chiefs’ Organization (SCO), which represents Manitoba’s 34 southern First Nations communities, the building will be redeveloped with a wide range of mixed uses benefiting Indigenous people, while also providing some new life for the city centre.

According to a 2019 assessment by commercial real estate firm Cushman & Wakefield, the building is worth $0 — not including a tax liability of $302,000 at the time that would make it technically worth less than zero. The process to sell the building would cost millions of dollars, and a capital investment of $111 million would be necessary to bring the structure up to the latest building codes. For several years, HBC had been exploring options to dispose of this asset.

“As we considered the future for the Winnipeg building, it was important to ensure a sustainable plan for the site that also had meaningful purpose for the city of Winnipeg,” said Richard Baker, governor and executive chairman of Hudson’s Bay Company, in a statement.

“HBC’s Truth and Reconciliation journey requires actions that demonstrate our commitment to moving forward together with Indigenous communities. We believe SCO is the right steward for this location, and can create a new community landmark that will help advance reconciliation.” 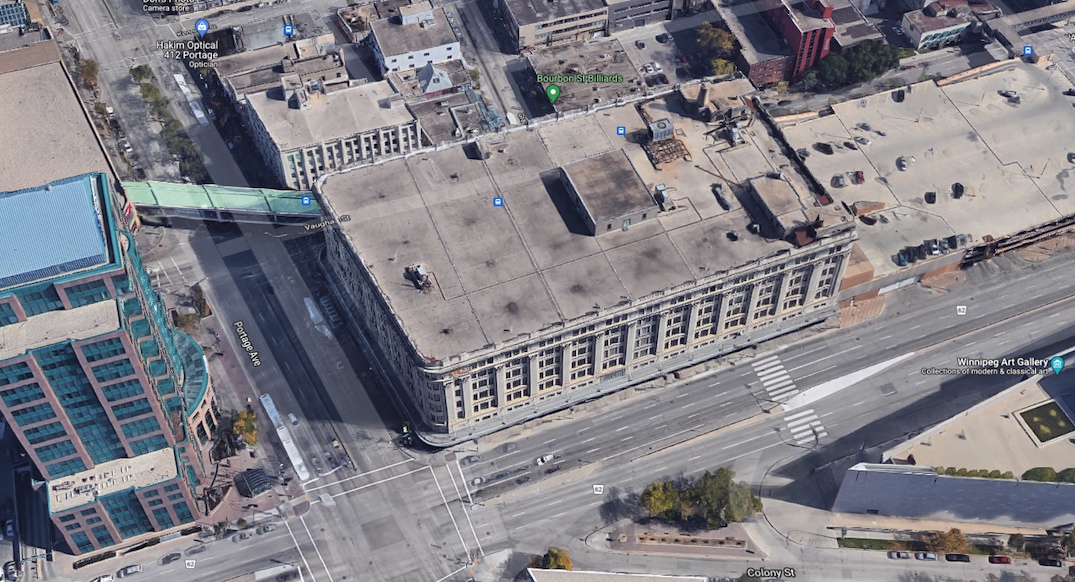 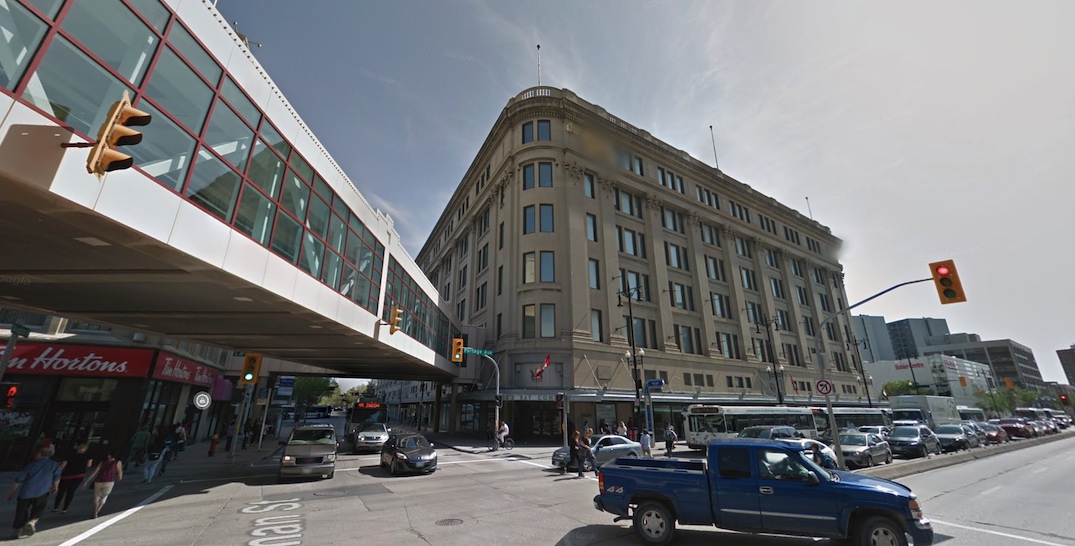 To bring the structure up to code and pursue the new mixed uses, SCO has received significant financial commitments from senior governments to cover project costs.

Last week, Prime Minister Justin Trudeau announced the federal government will contribute $65 million to enable the creation of about 300 affordable homes within the building for local First Nations members.

Another $35 million will be provided by Manitoba’s provincial government, including $10 million towards the housing component and $25 million for the heritage preservation and restoration of the century-old building — specifically its iconic facade.

The entire redevelopment, tentatively named Wehwehneh Bahgahkinahgohn, meaning “it is visible,” carries an estimated cost of $130 million, with the federal and provincial governments covering a combined $100 million.

A significant atrium will be punctured through the core of the building, with skylights establishing an indoor public space flooded by daylight. 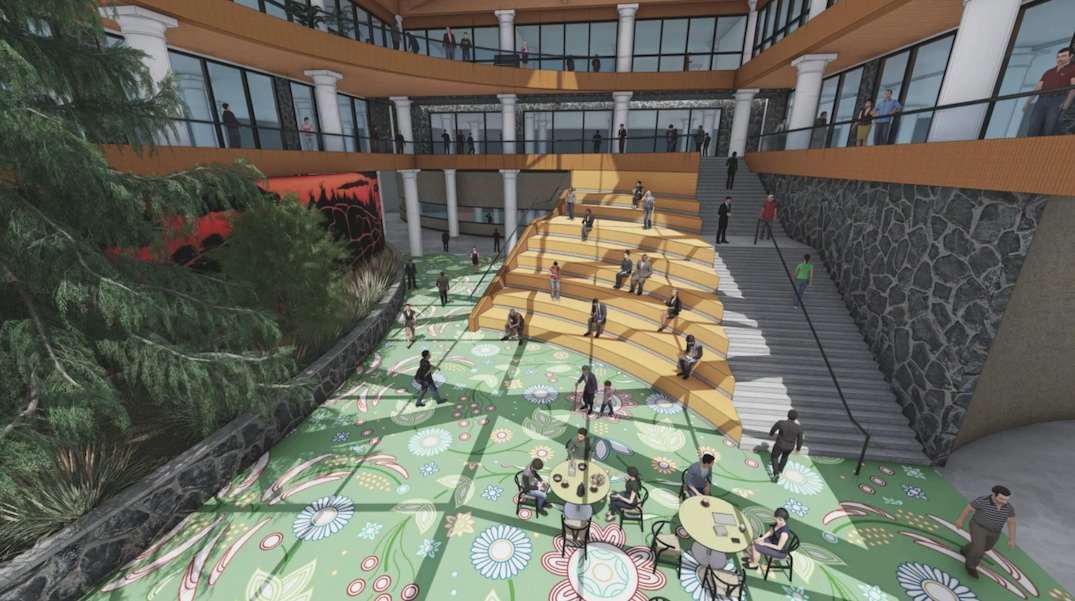 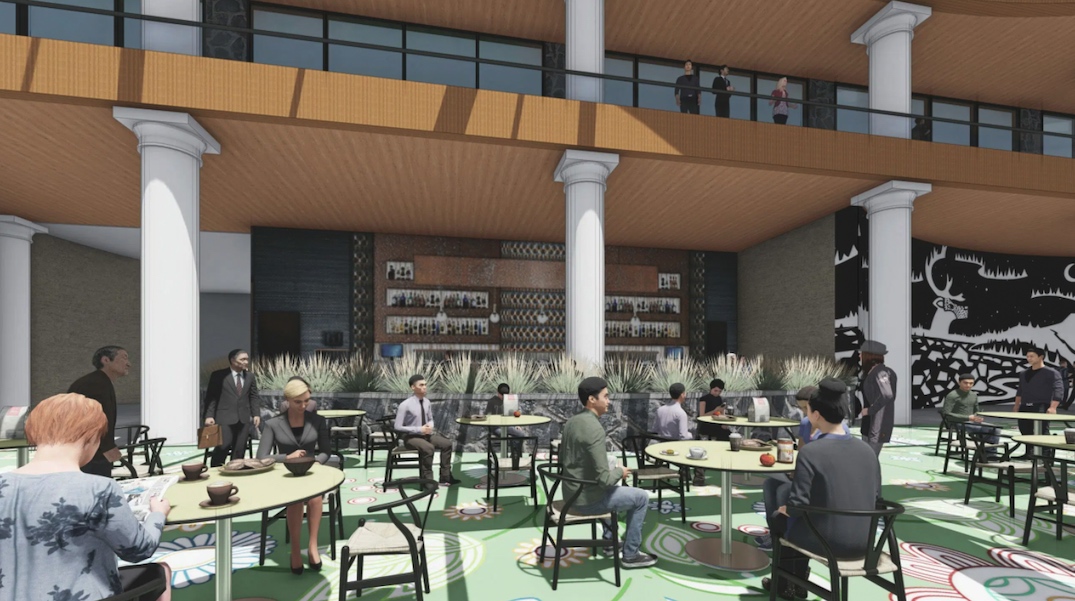 The store’s former main level, the floor of the atrium, will be a public space. The new building uses include a First Nations museum and art gallery, as well as a cafe and two restaurants to attract downtown office workers, students from the nearby university, and locals and tourists.

There will also be a childcare facility, retail space, and a health and healing centre with a pharmacy that offers both traditional and western medical practice.

The building’s rooftop will be transformed into an outdoor amenity space with a garden, accessible to residents, building employees, and kids in the childcare facility.

Additionally, the building’s future will have a key governance institution use for Manitoba’s Indigenous population. It will include the SCO’s Governance House for Chiefs of the southern First Nations.

Green design features will reduce the building’s energy consumption by 35% and greenhouse gas emissions by 81%. The redevelopment is being designed by Number TEN Architectural Group. 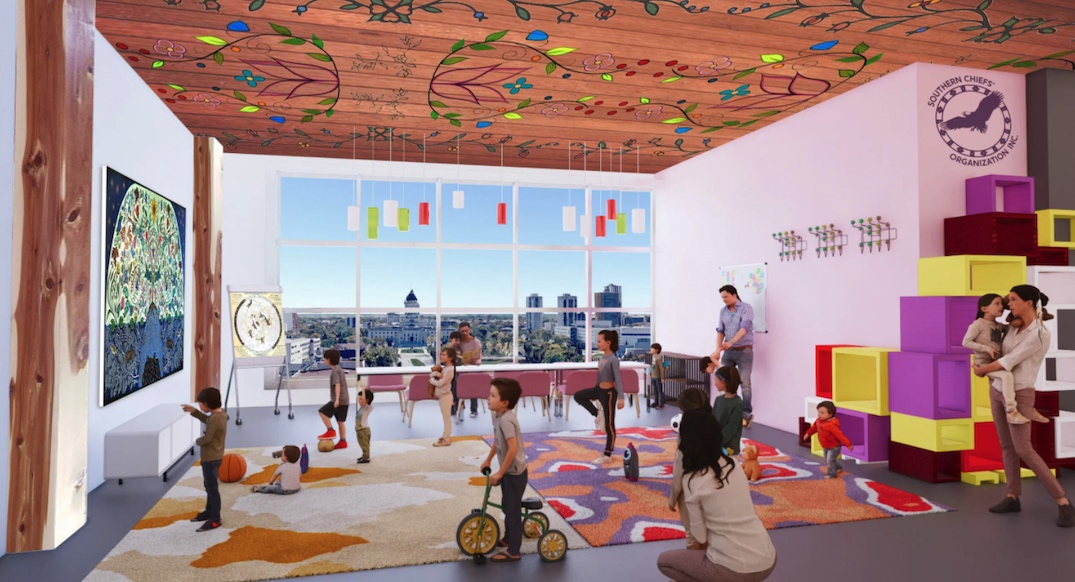 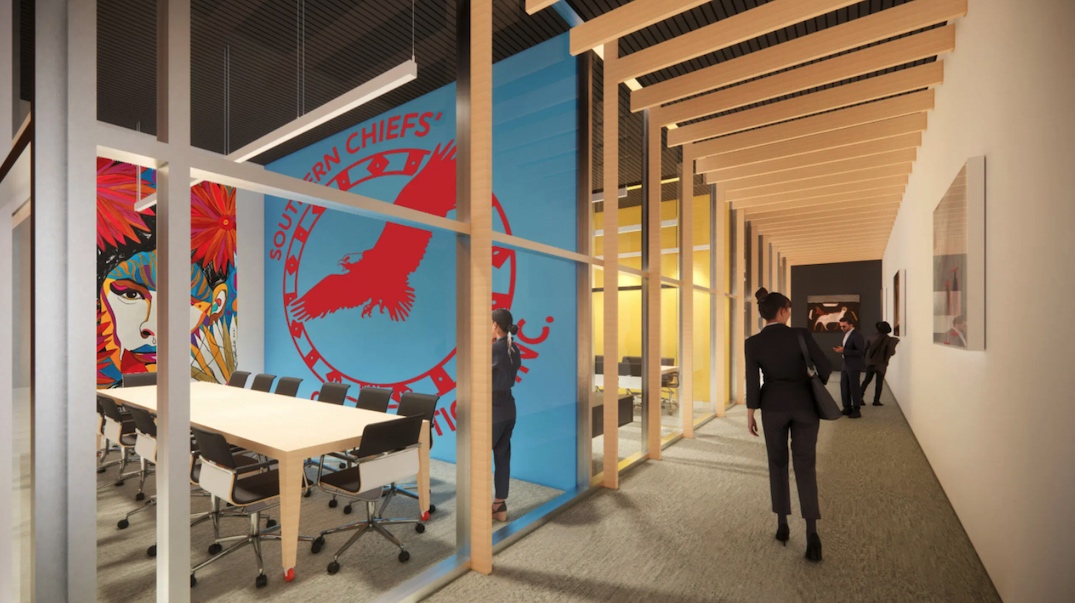 “This project represents SCO’s bold vision of what the future can hold,” said Grand Chief Jerry Daniels. “It can be a new world of hope and possibility, filled with place and space for our people to come together, to grow, create, and lead. A place for us to connect with people who come from across Turtle Island. A place for us to stand together in unity, speaking with one voice, proud of who we are. This is the vision of our ancestors.”

“This project is an act of reconciliation and is our vision to revitalize the heart of Winnipeg’s downtown, for the benefit of all, in line with our traditional, holistic approach to sustainable economic development.”

Construction is expected to begin in Fall 2022 for a targeted completion towards the end of 2025. 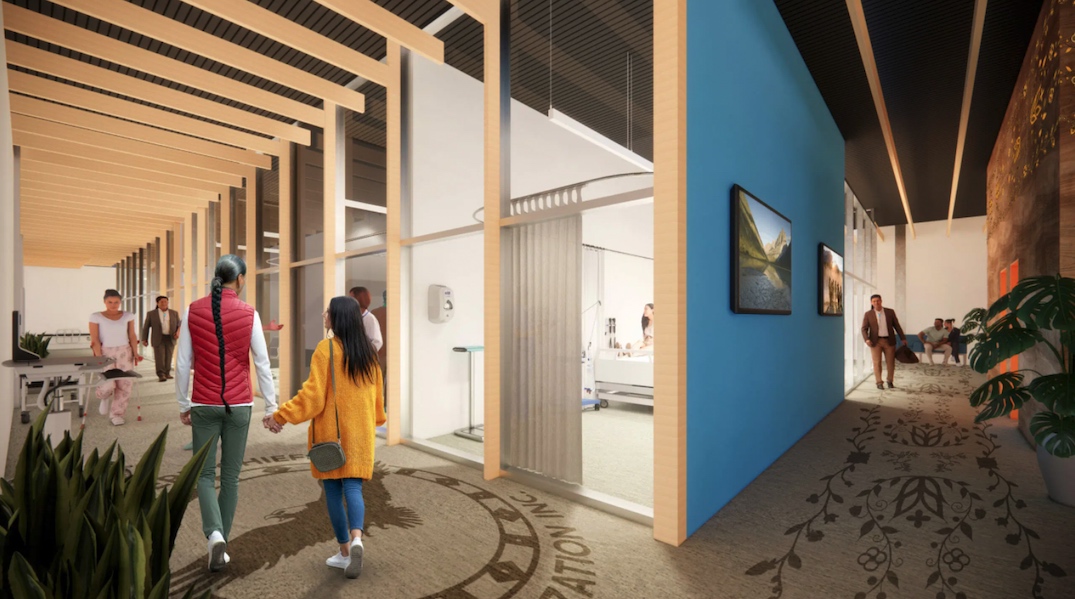 At other key department stores with economic viability for private market-driven development, HBC is pursuing redevelopments of its own.

In October 2020, HBC announced the creation of HBC Properties and Investments, a real estate division that focuses on maximizing the value of the company’s property, which totals about 40 million sq ft of gross leasable area across North America.

The division includes HBC’s formation of Streetworks Development, a New York City-based development company that is leading the execution of HBC’s in-house projects.

In early 2021, HBC announced its proposal to redevelop its eight-storey downtown Montreal flagship store. This includes a downsized Hudson’s Bay flagship store of 295,000 sq ft, plus a new 25-storey office tower above the heritage structure, creating about 680,000 sq ft of office space.

In February 2022, HBC revealed its proposal to redevelop its downtown Vancouver flagship store, also with a vertical expansion of the building — a 12-storey office tower addition over the existing six-storey heritage building, increasing the total floor area from 650,000 sq ft to 1.4 million sq ft. This includes 400,000 sq ft of retail and restaurant uses, including a downsized Hudson’s Bay flagship store oriented around a new internal atrium, and one million sq ft of new office space for up to 5,000 office workers.