If you were hoping to catch up on that nagging list of errands this weekend, think again. Unless of course “deepen that butt imprint on the couch” was on your list.

It all begins at 5 p.m. today as the Canucks continue their road trip in St. Lous. They’ll attempt to bounce back from last night’s tired-looking 5-1 loss to the Wild.

And don’t think you’re done after the Canucks game. Make sure you switch to TSN to see what’s happening between the Rough Riders and Eskimos.

Five out of the 8 CFL teams have a shot at winning their division this week. In the West, it’s between Edmonton, Calgary, and B.C., and in the East it’s between Montreal and Winnipeg. The winner of each division will have a bye through the first week of playoffs and host the conference final. 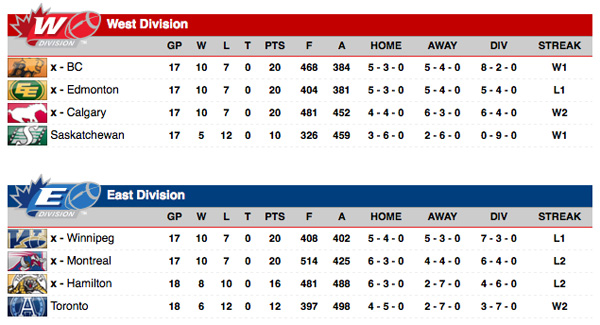 What each team needs

To host Conference Final: must beat B.C. and have Winnipeg lose to Calgary

To host Conference Final: must beat Saskatchewan and have B.C. lose to Montreal

To host Conference Semi-final: must beat Winnipeg and have either B.C. or Edmonton lose their game

To host Conference Final: must beat Winnipeg and see both B.C. and Edmonton lose their games.

For the Lions, it’s simple. If they beat Montreal on Saturday, they finish first.

Think you have Sunday off? No chance! On Sunday afternoon, the Canucks face their hated rivals, the Chicago Blackhawks. You can be sure Jonathan Toews and Patrick Kane will be looking to send a message after last year’s playoff loss.

Oh, and don’t forget Dan Carcillo’s famous fighting words when he signed with the Hawks in the summer.

This should be a good game.