It’s a catchy song (admit it), but as a description of his relationship with the fans? Not good.

By the end of the season, he won the Jennings trophy for having the least goals scored against his team. He was second in wins and goals against average, and third in save percentage. And he was nominated for the Vezina trophy.

Yet here we are again.

Some fans boo, some write daily tweets saying they hope Cory Schneider starts the next game. It’s all a massive waste of energy!

Here’s what will happen: Luongo will emerge from this and he’ll go on to set the world on fire like he always does.

Another similarly gutsy prediction: it will soon rain in Vancouver.

When it happens – Luongo’s return, not the rain – he’ll be stealing wins night after night and fans will be partying in the streets (unless it’s raining). 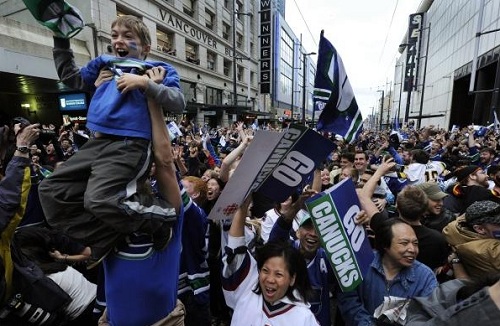 Another thing: like it or not, Luongo is the Canucks’ number 1 goalie. He will be so unless he is injured, traded, or catches malaria.

Damien Cox tried to say the same when he Tweeted:

@DamoSpin: Some Canuck fans on Luongo’s case in loss in NYR. His contract expires in 2022. Thus, all scenarios aside, he’s not going anywhere.

Why he’s tossing scenarios aside is beyond me, because trades are scenarios. And you can be sure that if the Canucks wanted to trade their world class goalie, they’d find a suitor in no time. Of course, Mike Gillis has no such intentions, so Cox has the right idea.

And as long as Luongo’s in Vancouver, he’ll be the starter. Schneider will not be, nor will they be splitting the games.

Back to those who blamed Luongo for Tuesday’s loss – is it not plainly evident that if a team scores zero goals, they’re not going to win?

Sure, Henrik Lundvist played well, but the Canucks’ efforts were pretty lame. A dangerous flurry in the third period, a fancy move by Alex Edler, a Keith Ballard shot tipped by Jannik Hansen… anything else? Alex Burrows stepped into Lundqvist’s crease once and was hammered for his efforts.

Other than that, there was a complete lack of urgency. The powerplay looked like it didn’t care and the team didn’t have the energy to forecheck for most of the night.

Lots to boo there, but somehow it all landed on Lou.

It’s a Stanley Cup Finals hangover and we knew it would come. To those who booed, someone should come to your house and boo you. You’re a bit of a slow starter yourself.