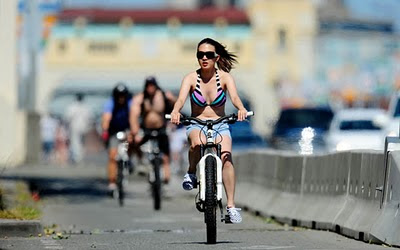 Photo and source: The Province,  taken by Nick Procaylo
Another week, another bike initiative announced by our foul mouthed, green machine mayor. As early as next fall downtown Vancouver may get another separated bike lane (similar to the new Dunsmuir Street bike lane). All of this is part of Vancouver’s $25 million master cyclist plan to make biking around Vancouver more accessible and safer. The connection makes complete sense, however, does the route make sense?

Naturally the city will hold a public consultation process. However, take this new project to the bank as the mayor will justify (rightfully or wrongfully) any opposition to the new Hornby Street bike path. He’ll probably just call them F**kin’ hacks and be done with it.
Similar to the Dunsmuir bike lane, it will be a two-way separated bike lane. The route would connect the Dunsmuir  lane, the Burrard bridge lane and the seawall.
With the success of the Dunsmuir bike lane still up in the air, I’d like to see why the sudden necessity to push ahead so soon with a new lane. Don’t get me wrong, I think we need more cycling options in the city and the separated lanes are the way to go. I’m just not sure if this is the right route. However, time will tell if this plan is successful or not.
With the Vancouver Bixi program expected to come full board next year, I think the mayor and his crew need to look into a connection the various schools downtown with accessible lanes. Just a thought.
VancityBuzz.com