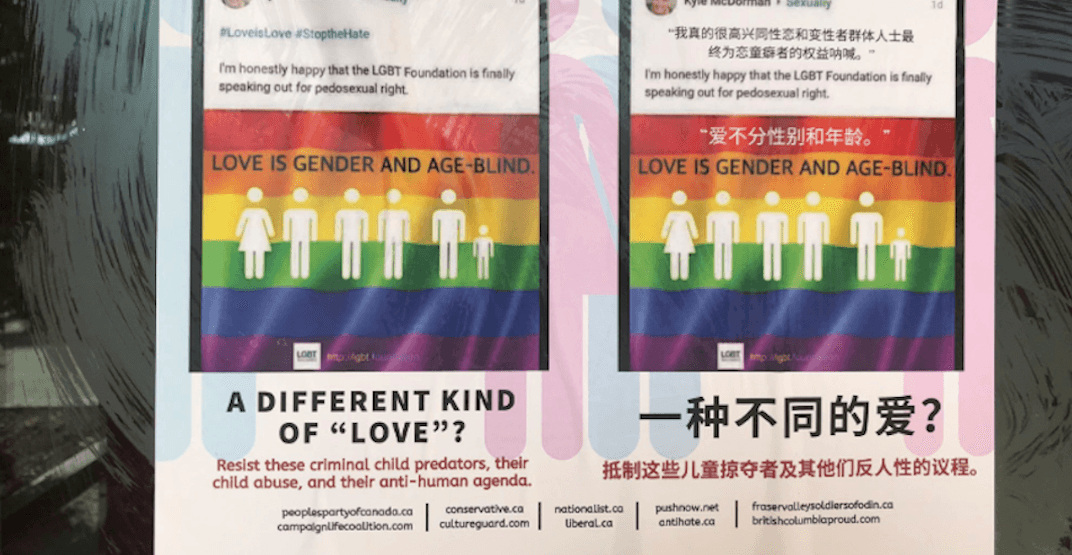 Posters put up in various places around Richmond featuring a rainbow and speaking about “pedosexual right” – sex between adults and minors – before being taken down were “obviously unacceptable and homophobic,” the city’s mayor said.

The posters had been put up at a number of locations, including a TransLink station, said Mayor Malcolm Brodie.

One person who shared a picture of the posters online said the message was “very confusing but feels anti-LGBTQ.”

I found these glued to the front doors of a public school in #RichmondBC. Also more plastered near the front door. Saw some at the Terra Nova @saveonfoods parking lot yesterday. The message is very confusing but it feels anti #lgbtq 😡 #bced #vanpride @RichmondSD38 #lovenothate pic.twitter.com/VLrXd0PyvQ

Brodie told Daily Hive the message in the posters is not what the city, nor its council, nor any of its programs stands for.

“We pride ourselves on diversity and inclusion, and support for various groups,” said Brodie. “It just doesn’t represent anything about what the city has to offer.”

Brodie noted that the city has just recently installed a rainbow crosswalk to celebrate and acknowledge the LGBTQ community has been painted on Minoru Road.

The colourful mid-block crosswalk is adjacent to Richmond Library and Cultural Centre and the City Hall Annex, and immediately southwest of CF Richmond Centre shopping mall.

And Brodie said that in the course of discussions leading up to the crosswalk installation, “the point was made repeatedly that the city stands for minority groups, diversity, and inclusion.”