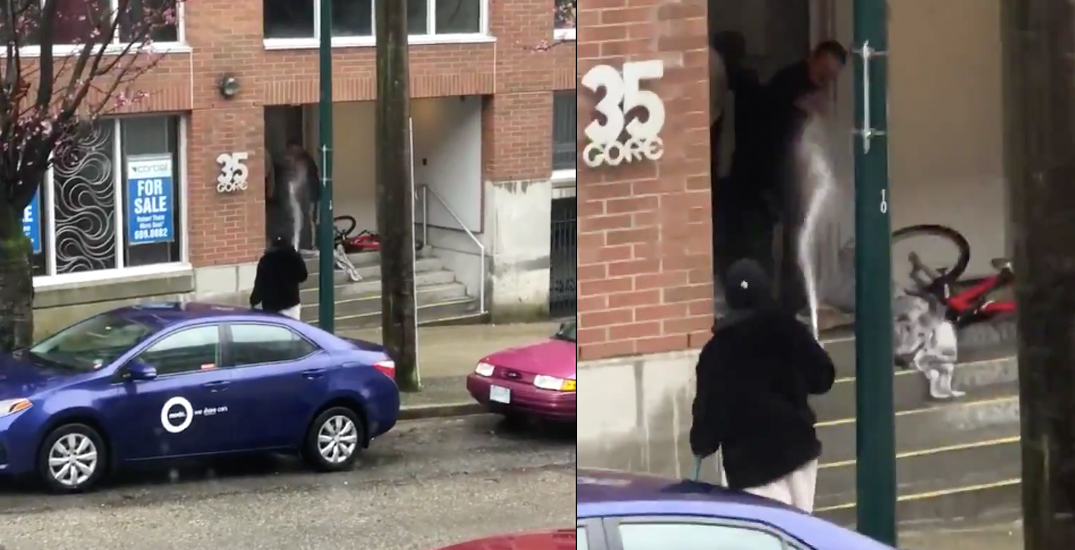 A Vancouver photographer captured disturbing video footage of a man spraying a homeless person with a hose for sleeping on the steps of a Railtown condo building.

Mike Chatwin, who lives across the street, said the incident happened just before 10 am Saturday at the side entrance of The Edge building at Gore Avenue and Alexander Street.

“It’s raining out, it’s cold. There’s a crisis. Theres no beds for these guys,” Chatwin told Daily Hive in a phone interview. “And now he’s soaked”

Chatwin’s video shows a man in a black sweater and a hat turn on the hose and walk over to where the homeless man is lying. He aims the stream of water on the sleeping figure until the homeless man stands up.

At that point, Chatwin begins yelling at the man with the hose, threatening to call the police.

“I had to do something to stop it in the moment,” Chatwin said.

The man gives Chatwin the finger, and appears to aim the hose in the photographer’s direction before walking away.

Chatwin said he’s seen the man use the hose before to spray homeless people’s belongings while he’s washing down the building’s steps. But this time he thought the man went too far.

Chatwin identified the man as The Edge’s building manager, and Daily Hive has reached out to StrataWest Management Ltd. and Rancho Management Services, the property management companies associated with the building, to confirm.

This is how the building manager of The Edge in Railtown is dealing with the homeless issue. Unacceptable. Excuse my language in the video, I was in shock. @CBCVancouver @CTVVancouver @GlobalBC #pandemic #coronavirus #COVID19 pic.twitter.com/edIW5usH5w

Afterwards, Chatwin’s building manager let the homeless man inside and gave him some towels to dry off.

The Vancouver Police Department is investigating what happened, media relations officer Cpl. Tania Visintin told Daily Hive. She said the victim had left the area by the time officers arrived and they’re still trying to locate him, although that contradicts what Chatwin saw.

The photographer said he understands homeless residents in the neighbourhood can sometimes be challenging, but he doesn’t think hosing them down is the answer.