At the intermission of #eastvanpanto, I had the chance to preclude the review to come. My one thought, then and now: “F**king brilliant.”

Jack & The Beanstalk: An East Van Panto is the theatre equivalent of what happens when some of Vancouver’s biggest names come together under a single roof. Thankfully, unlike many of its Hollywood counterparts, this blockbuster musical doesn’t flop at the box office. With crisp production values, a cast that understands the nuances of comedic timing and one amazing script, York Theatre’s premiere production instantly puts both play and venue on the map.

The biggest problem with most musicals is that the script just isn’t zingy or clever enough. Actors stand around making busy-work while waiting to break into song, and jokes can fall flat due to weak source material. With Panto, however, Demers proves that he is just as good behind-the-scenes with his personal brand of self-depreciating humour. Clearly a long-time resident, Demers pokes fun at the best and worst of East Vancouver without ever relying on low-hanging fruit. The script is tight, and can be read on a multitude of levels – engaging the kids while winking at the adults with suggestive references. 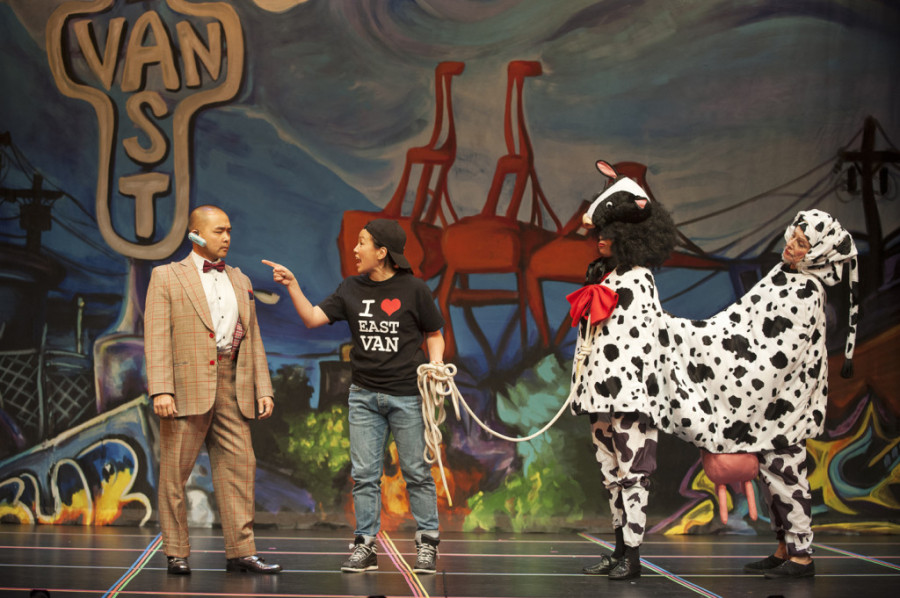 Undeniably, Allan Zinyk as Jack’s mom steals the show. His rendition of ‘drag mom of the year’ had me in stitches whenever the character was on stage. It all worked without resorting to stereotype due to Zinyk’s astounding comedic timing, and his self-aware acknowledgement of the sheer ridiculousness of his role. This is not to rap on the rest of the cast, who were equally strong – so much that you forget there are only up to five people on the stage at any time, as all of them play two characters apiece. The production seems so much bigger than it is on paper, enhanced by gorgeous backdrops by Laura Zerebski.

Theatre Replacement carries on their tradition of fine casting, and makes some on-point choices about gender and sexuality. Again, so very quintessentially Vancouver. 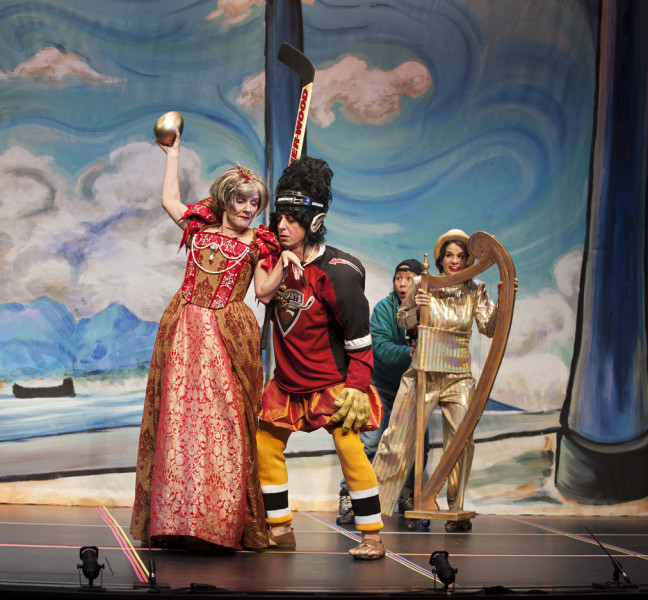 You know you’ve won at life when you can get Veda Hille on board to write and perform some of the most insane songs I’ve heard this year. Having the talented musician interact freely with the cast (and audience) was a great bonus. Shameless rip-offs of famous songs remixed with jaunty new lyrics – where else can you get an off-tune harp dropping cheese names but here in East Vancouver?

In summary: I can’t remember when I stopped laughing. My sides still hurt just thinking about it. And so Vancouver that you can’t help but come along for the ride.