Whether you’ve seen the new Straight Outta Compton biopic or not, you probably already know about West Coast hip hop icons Eazy-E, Ice Cube and Dr. Dre. What you might not know is how these guys might have had very different lives if not for Bryan Turner, a Canadian born in Winnipeg and raised in Vancouver.

In 1985, Turner founded Priority Records, which is known for being the only label willing to distribute the first N.W.A. record back in 1988. Regardless of the violent and controversial rap music he represented, Turner went on to sell millions of albums and turned Priority into one of the biggest players in the history of gangsta rap. 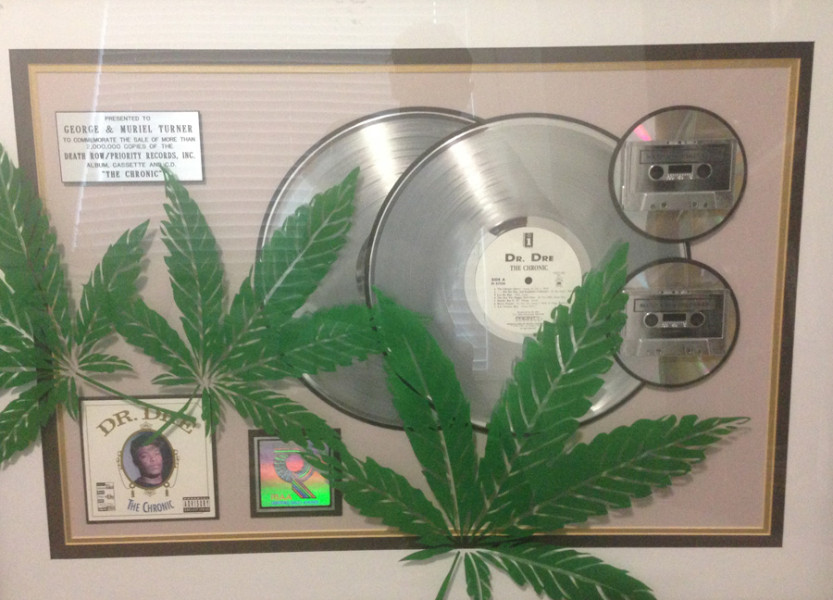 Over the years, Turner would send official gold, platinum and multi-platinum sales plaques dedicated to his parents who lived in a modest apartment in Richmond. This weekend, these official plaques from N.W.A., Eazy-E, Dr Dre, Ice Cube and other Priority Records artists will be displayed and auctioned off with half of all proceeds benefiting the YMCA of Greater Vancouver.

We recently had a chance to catch up with Turner’s nephew, Daniel Cutler, to talk about the story behind how so many iconic sales plaques found their way to Vancouver all the way from Los Angeles. 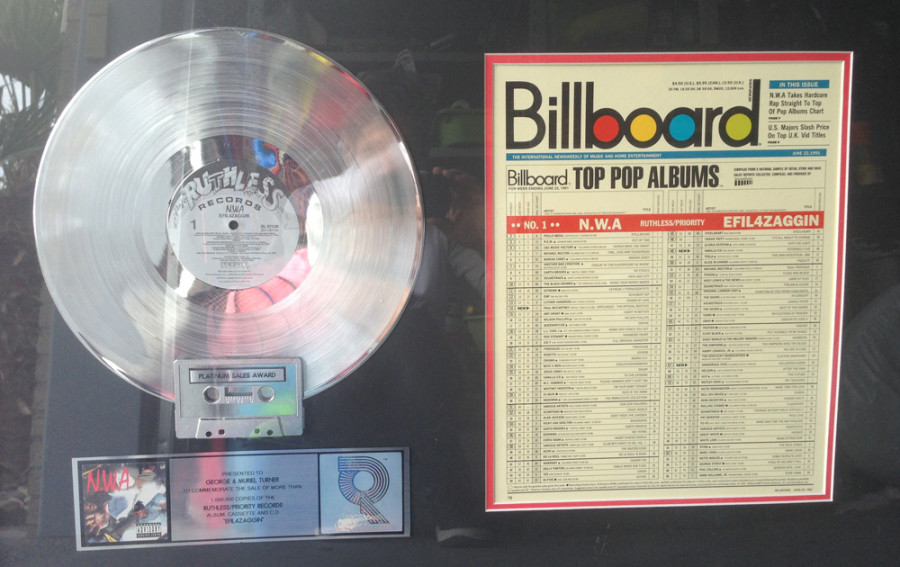 Tell us about yourself and your connection to this project.

My name is Daniel Cutler and I work in the television and music industry. I’m also the nephew of Bryan Turner who is the founder of Priority Records and the guy who signed N.W.A, Ice Cube, Eazy-E, Mack 10, Master P and bunch of other hip hop artists.

Tell us about what you did when visiting your uncle at Priority Records in L.A.?

I think the first time I visited Priority was when I was 11 years old; there were literally only three people in the office at the time. I would go back to visit every year or so and watched the company grow from a just few employees to eventually take over two floors of a building.

My uncle let me sit in on meetings with the artists a couple times too. I remember Eazy-E coming into a meeting and saying, “What’s up with the kid in the corner?” Bryan would say, “That’s my nephew, he’s cool don’t worry about it.” It’s pretty funny now that I think about it.

I also remember spending a day with Eazy-E shopping on Melrose about six months before he passed away. I was 13 years old at the time and the two of us drove in his car, which was a white BMW 850, to Fat Burger. We got in the car and before he even shifted into drive he looks over and says, “So man… they like our s— up in Canada?” I was like, “Yes Mr. Wright, they do like your s—.” Ha!

Did you grow up in Vancouver?

Yep, I was born and raised in Vancouver but spent 13 years in Toronto in the music business before coming back home a few years ago. I now live in East Van and love it. 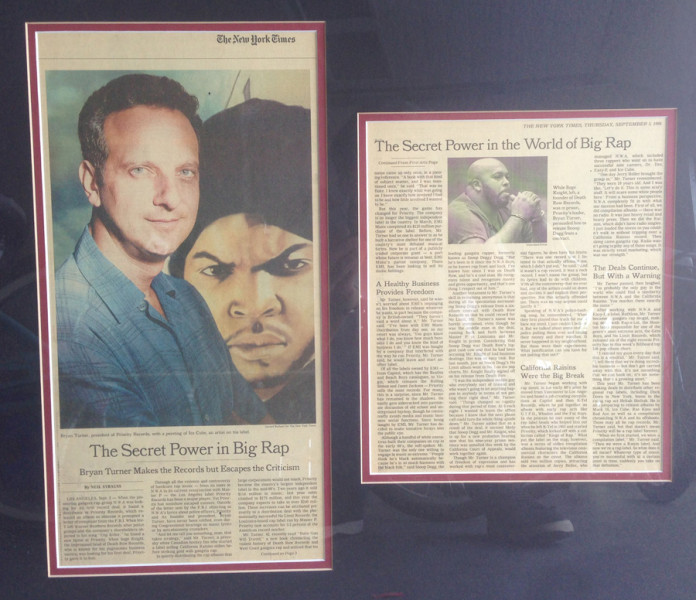 So your grandparents, Bryan’s parents, would receive these sales plaques in the mail during the ’90s?

Exactly. Every time a Priority album would reach gold in sales (half a million copies sold) or platinum (a million copies sold), Bryan would send a gold or platinum award dedicated to his parents who lived in a modest apartment in Richmond. They were proud of their boy and would hang every piece on their living room wall. It was a kick to see my elderly grandparents in their easy chair recliners surrounding by images of half naked girls, guns and weed. 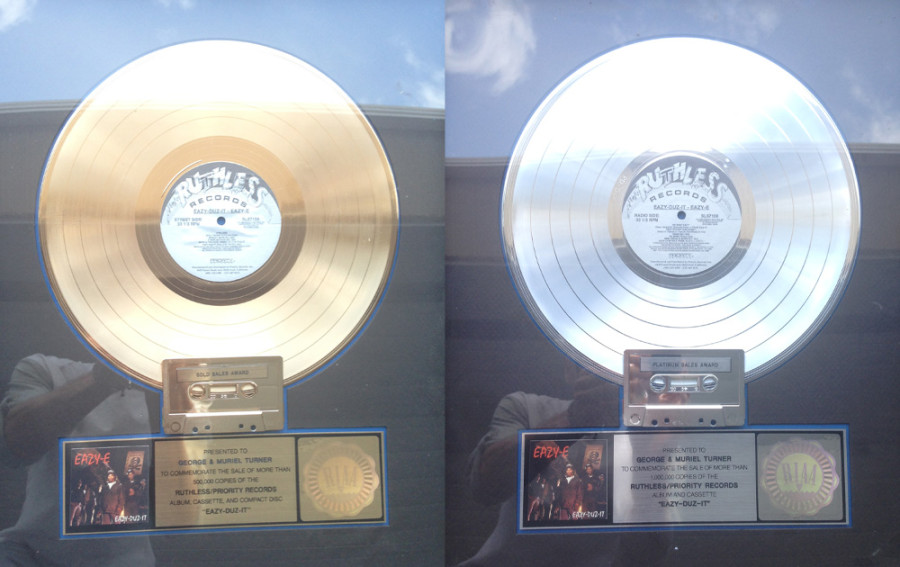 Did they know what they were receiving or what kind of music Bryan was distributing?

Yeah, they knew it was rap music and that it was controversial. I think they just thought the awards were a sign that their kid was doing okay in Los Angeles. It was almost like, “Well, these must be a good sign.”

Did they know how crazy the gangsta rap music industry was at the time?

So they just hung onto these record sales plaques until now?

Exactly. The plaques were on their walls for years. Then at some point, probably when I was in Toronto, they took them all down. They never really told anyone, they just did it and no one seemed to notice until we found them in a storage locker some years later.

Why did you guys decide to sell these plaques in part to benefit the YMCA?

That’s a good question. The charity angle was really important to us and because this is a Vancouver story, we wanted to ensure that we went with a company that has a history of doing good work for the community. The YMCA of Greater Vancouver does amazing work with teens, many of whom are underpriviledged or at risk of heading into the wrong direction. The same could be used to describe the situation of most of the artists that Priority signed at the time; we’re just trying to keep it real.

That incident with Ice Cube in the Straight Outta Compton biopic. Did that really happen?

Well, let’s just say some glass breakage was involved but it wasn’t nearly as extreme as they showed in the movie. Which I understand, because it’s a movie and it was somewhat taken out of context. After that incident Cube went on to release seven albums and sell millions of copies with Priority so he and Bryan obviously got over it! 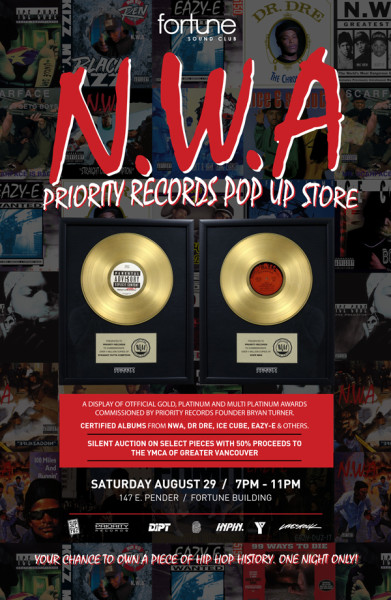