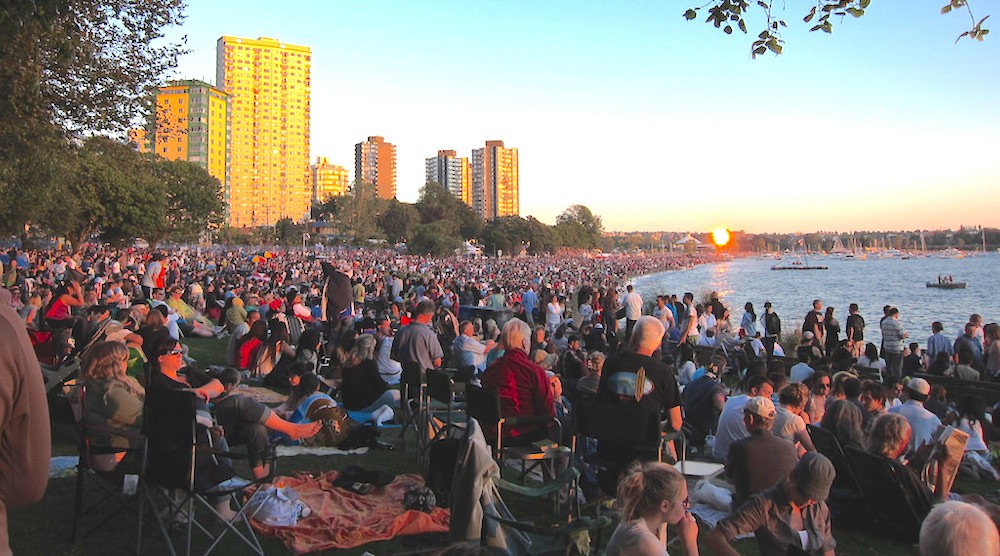 Vancouver Police and Metro Vancouver Transit Police are confident they are fully prepared to respond to and deal with any incidents that may arise from this year’s Honda Celebration of Light fireworks festival.

Several hundred police officers, traffic police officers, and community police volunteers will have a highly visible presence in and around the fireworks viewing areas in downtown Vancouver throughout the afternoon and into the evening. The Vancouver Police Department (VPD) will have officers on foot, horseback, bicycle, police boats, and from the air to monitor crowds and boats. Dogs that sniff for explosives will be present on both transit and other public spaces.

Additionally, Transit Police has plans to deploy extra officers to deal with any issues that may arise, and paramedics and fire rescue will have a heightened presence.

As for vehicle access into the main viewing areas, the usual access restrictions will be in place at 7:30 pm in the West End and 6 pm at Kitsilano Point each fireworks night. The ‘appropriate’ police resources will be stationed at the entry points into the neighbourhood to deal with anything that may come up.

“Our police officers are very cognizant of what’s happened south of the border and internationally, and we’ll make sure everyone is safe,” said VPD Deputy Chief Constable Warren Lemcke during a press conference.

“In Canada, the threat level is at medium and there are no specific threats to Vancouver. Having said that, we are going to be extremely vigilant. We want to encourage people to report anything that may appear suspicious so officers can respond and assess public safety concerns immediately. We’re prepared and have multiple resources at our disposal for our commanders at night. We don’t expect there to be a problem.”

Police expect public drinking on public transit, beaches, and parks will be the main issue, and they will be enforcing liquor laws with penalties of $230 for anyone caught drinking or possessing liquor in public.

Fights and rowdy behaviour at the annual fireworks festival has been in decline in recent years, according to Metro Vancouver Transit Police Chief Doug LePard, who was previously the Deputy Chief of the VPD until this past spring.

He believes the shift began in 2012, after the 2011 Stanley Cup Riot when hundreds of people were caught on smartphone cameras committing criminal acts. It was at that point that people began to realize that they would not be able to get away with unacceptable behaviour.

“A lot of the problem people we saw in the years before are not coming anymore, that’s what I’ve really noticed over the last few years,” said LePard. “It really became a family event. We don’t see that at all now, we see a lot of families with kids.”

From the riot, regional police forces also learned that they had to tackle any potential issues ‘upstream’, especially on the public transit system. The Transit Police force has become integral in security plans as they intervene on unruly individuals and open drinking on the public transit system so that problems are not sent into downtown Vancouver.

As well, the resulting independent report on policing procedures during the riot led to new methods on how to deal with large crowds at events and festivals.

“The police response is different and much more robust than what it was years ago,” Lemcke added. “Our meet and greet philosophy, of us engaging the crowd and really trying to help make it a fun night helps.”

Revellers going to beaches and parks are reminded by police to stay alert their surroundings, keep valuables secure to not invite pickpockets, and not play Pokémon Go at SkyTrain stations. “Your safety is far more important than capturing Pokémon,” said LePard.

Anyone planning to watch the fireworks from the beach are asked to be mindful of the high tide lines as water will be rising up to the fireworks start time.

Clean-up crews with the Vancouver Park Board will be deployed to beaches and parks at 5 am daily, at first light after the fireworks shows, to get the green spaces cleared and ready for the next day of beach enjoyment.