Lilian Broca is an established visual artist based in Vancouver. Centuries ago, mosaic art was physically removed from ordinary people, with works mounted on church walls and domed ceilings. Broca, however, wants to make the art form accessible to everyone.

Broca’s latest exhibition, Heroine of a Thousand Pieces: The Judith Mosaics, interprets the story of the Biblical figure Judith and features seven large mosaic panels created in Italian smalto glass. The panels, which Broca completed over three years, weigh approximately 80 pounds, and range from 70 to 78 inches tall, and 48 inches wide.

The story of the strong-willed Hebrew widow Judith and the enemy Assyrian general Holofernes fits with Broca’s desire to tell stories of spirited women whose sacrifices, courage, and sheer force of will resulted in powerful social changes. The Judith Mosaics reveal Broca’s interpretation of an ancient story that raises ideas about women’s role in society, encouraging contemporary women to possess the courage and inner strength of the independent, daring Judith.

Below we had a chance to catch up with the artist to chat about what inspires her as well as her transition from painting to creating mosaics. 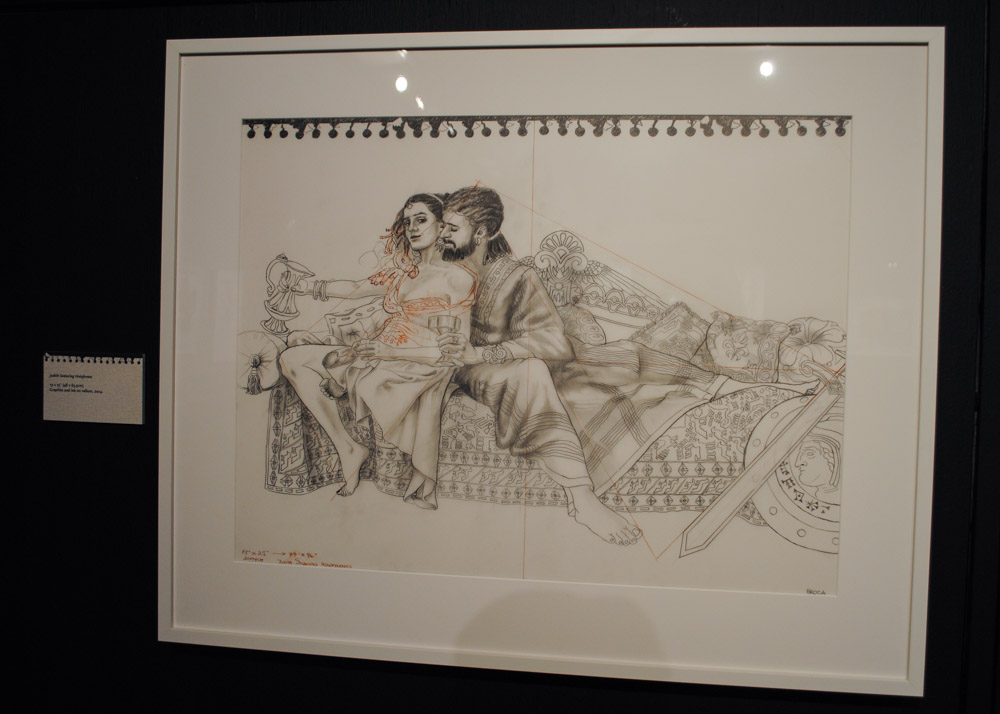 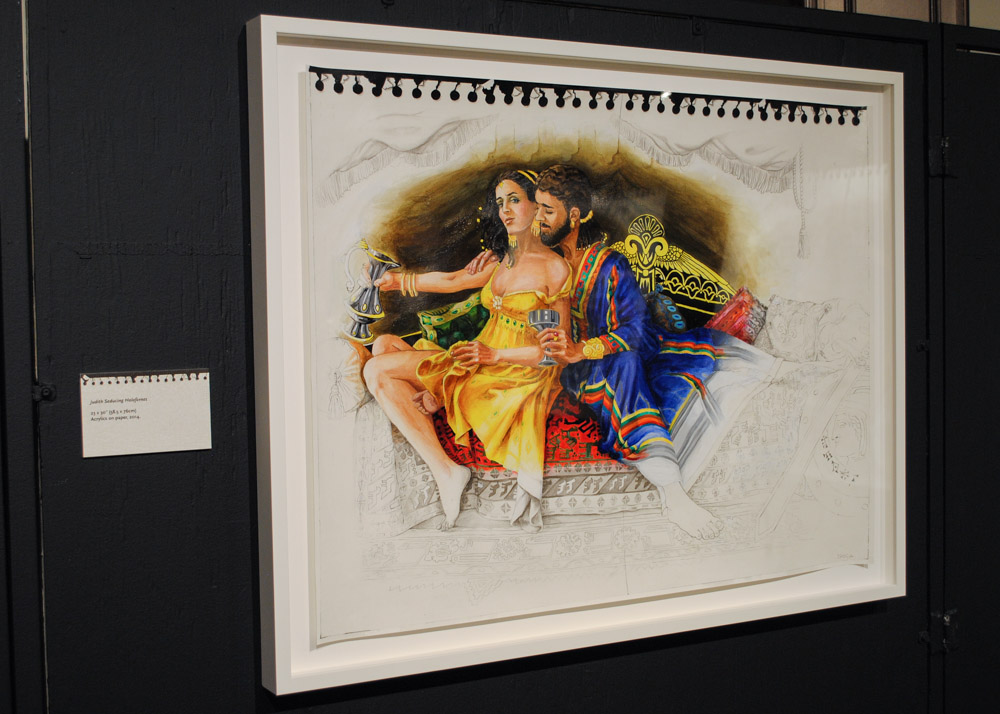 Please introduce yourself and what you do

I’m Lilian Broca and I have been a professional visual artist for more than 35 years. I taught Studio Art at Kwantlen Polytechnic University for 15 years and during my career I have exhibited my artwork at various public and commercial galleries in both Canada and abroad.

Your started your artistic career as a painter first. Did you ever go to school to learn how to build mosaics?

I graduated with degrees in painting and art history and continued to paint and exhibit for many years. Although I did experiment with mosaics very briefly in my youth, I never had formal training in this beautiful but complex artistic discipline.

Knowledge gleaned from ancient mosaic books, three days in Ravenna with Maestra Luciana Notturni, and a three-hour workshop in the USA are the sum total of my mosaic instruction. Spending countless hours working and experimenting on my own seems to have helped. 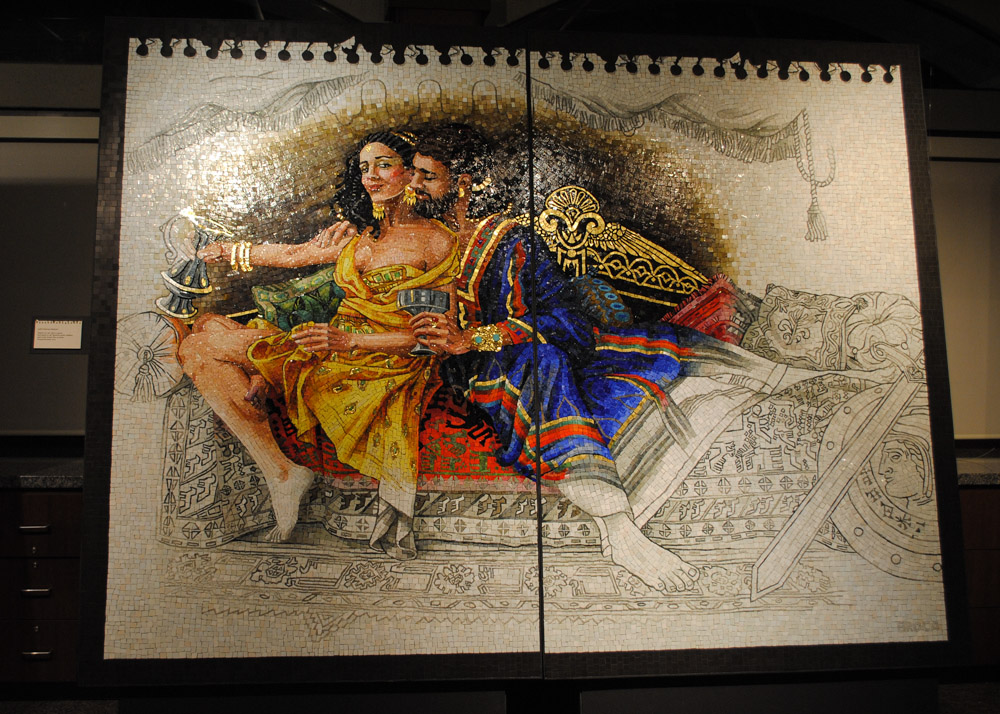 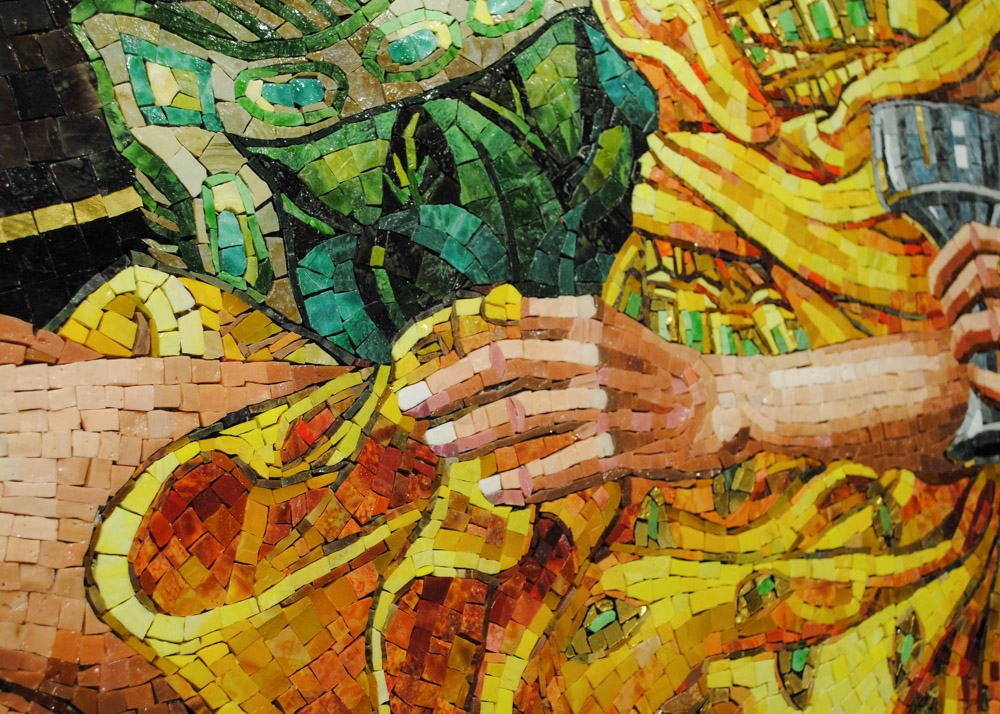 Creating mosaics is a very time intensive art form. How long did it take you to complete The Queen Esther mosaics from start to finish? The Judith mosaics?

The Queen Esther Series was my first departure from painting. At its inception I never imagined how long it was going to take to complete such a massive project. It required extensive research, many sketches which evolved into painted “cartoons” which served as guides during the execution of the works. This narrative series of 10 mosaics (some diptychs and one triptych) took me seven years to complete. It was executed in the Byzantine manner: a formal, quiet, frontal mostly, icon-like composition with bright colours and a great amount of gold smalti. This style suited the heroine, Esther, who was a shy, passive young girl, loyal to the ruling men in her life as it was the custom in 5th century BCE.

The Judith mosaics are also a narrative series, only the heroine is a warrior from the start. Like Esther, she saved her community from annihilation, yet she did it on her own, without letting her plans to destroy the enemy by herself be known. With such a strong personality I felt that she needed to be portrayed in a different style, so I chose dramatic poses full of action and movement, exaggerated expressions and in general, a more naturalistic approach. The nine panels, seven mosaics, two of which are diptychs, are much larger than the Esther mosaics. I realized that I required more hands with the cutting and gluing in order to complete the work in time for the travelling exhibition which starts on November 12. With the help of four other hands, I managed to complete the Judith series in three and a half years. 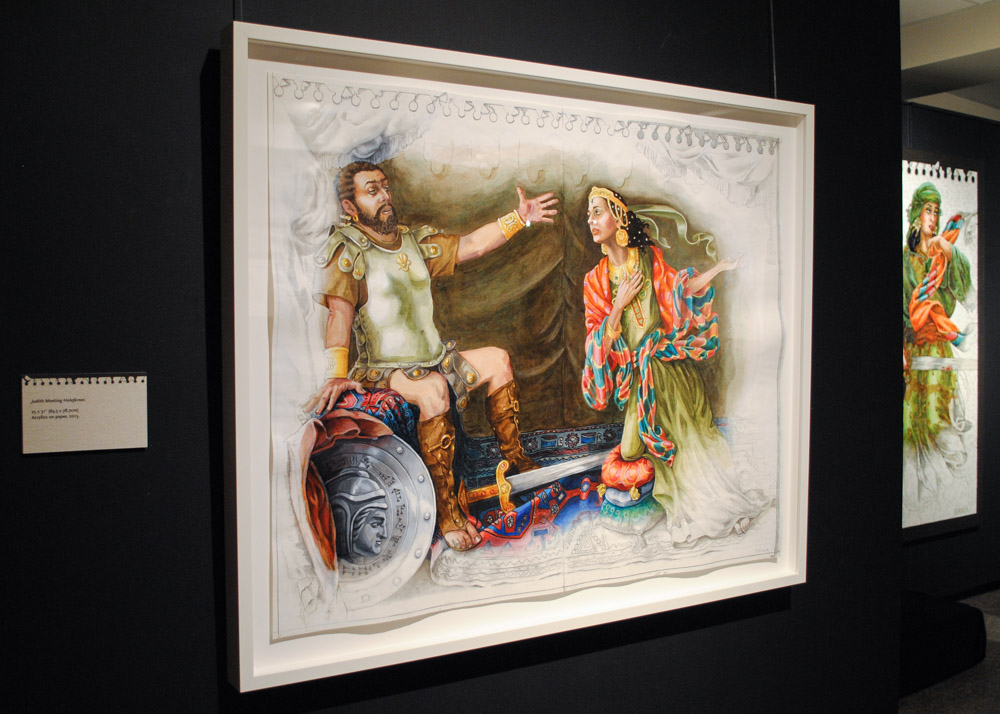 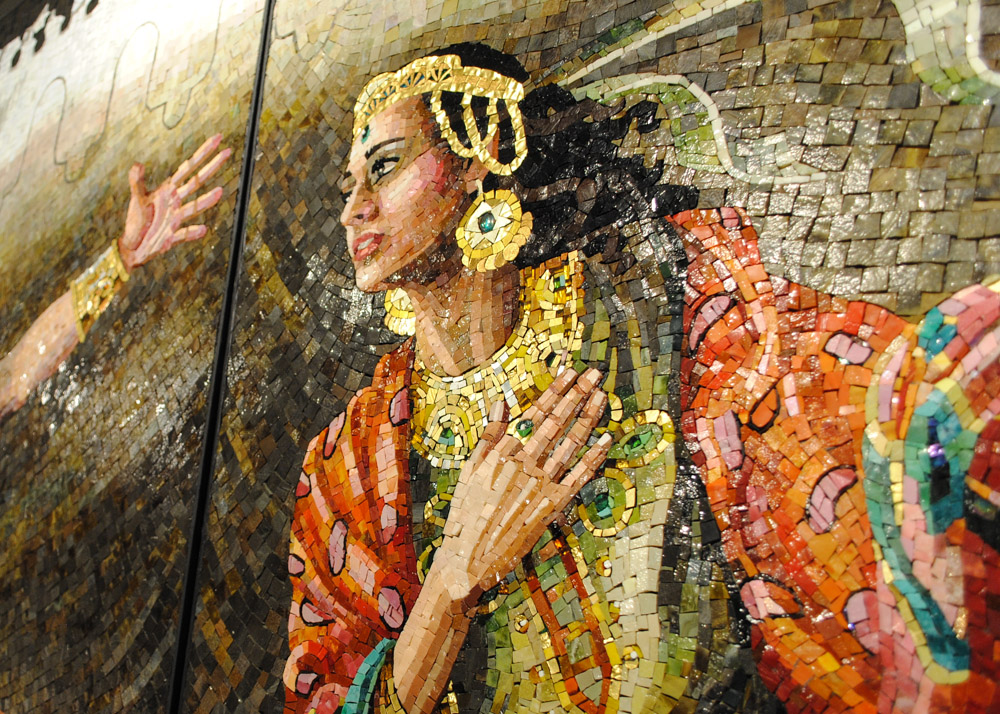 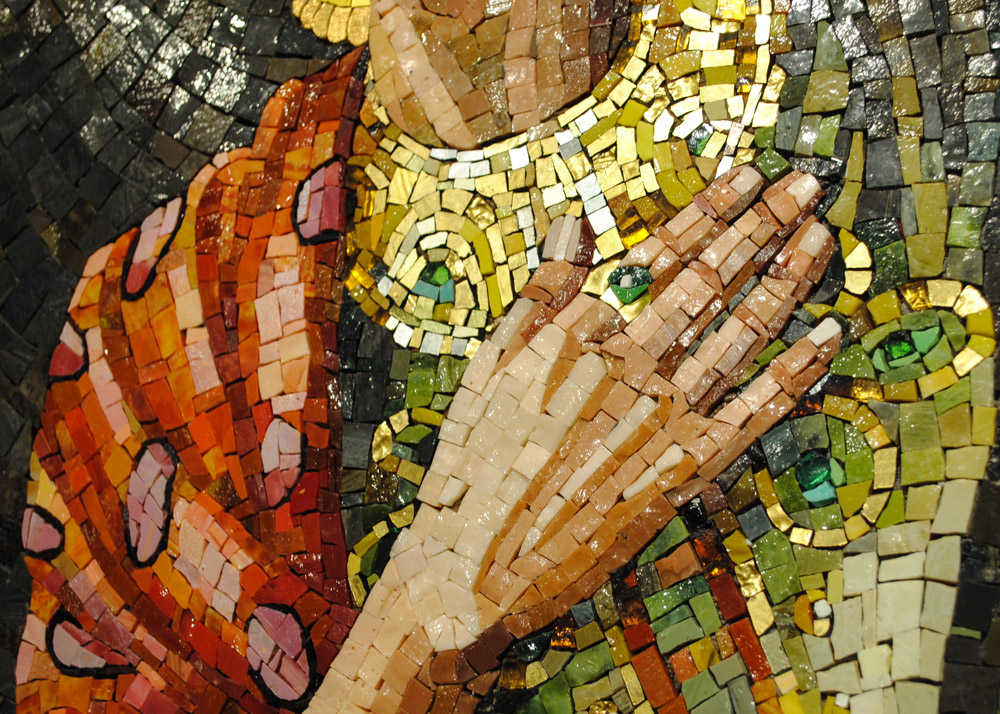 The mosaic designs that you’ve created so far have primarily been based around biblical stories. Do you have any desire to create mosaics featuring more contemporary subjects in the future?

Throughout my career I have been focusing on societal issues, especially those involving women and their plight in historical times, but which act as metaphors for issues that affect today’s society as well. These heroines that I chose are brave females who despite overwhelming odds against their success, have prevailed through sheer courage and wise resolve. Although the medium I work with is ancient, the message the mosaics transmit is a contemporary one of self-empowerment. The biblical heroines who act as role models for today’s society shed light on some contemporary concerns.

In addition, we live in an era when different cultures circulate around the globe, integrating with and overlapping each other. Our world is becoming more fragmented each day and it is essential to gather these fractured elements and rebuild the world.

Mosaics with their “individual bits” incorporated into larger artworks reflect very well the present world arena with fractured society groups migrating and integrating in new cultures. The end result is an invigorating and exciting amalgam of colours and textures that work well together. Therefore, I consider my work very much contemporary, as it falls in the category called Critical Post-Modernism.

What are you planning to work on next?

It’s a little too early to tell. I, of course, have some ideas for further works but not concrete enough to talk about. Suffice it to say that future work will be consistent with my life-long interest in social issues and the human condition. 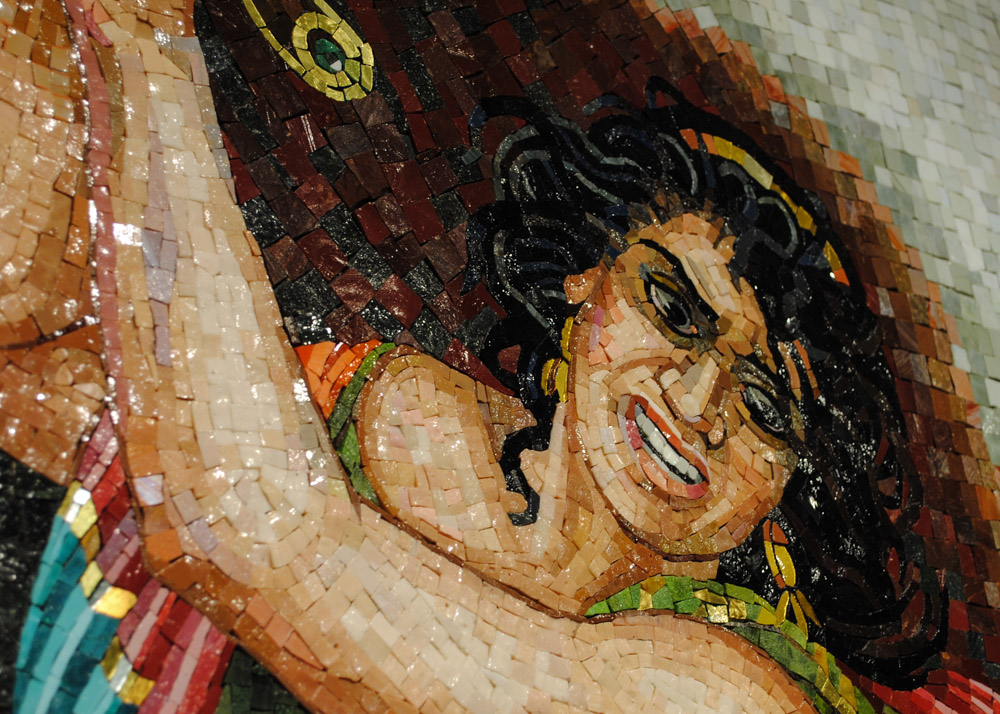 Heroine of a Thousand Pieces: The Judith Mosaics