Perhaps the appreciation of the accomplishment was dimmed amongst all of the depression of losing to the Leafs, or hidden amongst the shine of the amazing “Skate” jersey coming out of retirement for a night. Maybe it’s just one of those things that is better appreciated after years of reflection, long after Henrik has retired, and you are arguing with friends in a bar over who the best Canuck of all-time is.

“Libor Polasek!” you’ll reply with a smirk, just before Nakatomi Plaza gets taken over by bank robbers on the TV in the background.

Whatever the case may be, Henrik Sedin played his 1141st game for the Vancouver Canucks on Saturday afternoon, cementing a legacy that was already, well, pretty much cemented. Hank took over first place on the games played in a Canucks uniform list, beating out former teen heartthrob Trevor Linden.

In fact, if it wasn’t for the cruel nature of measuring success in sports, one more win in 2011 would have most likely cut that argument in the bar to “How much better is Henrik Sedin than everyone else?” while demanding the tattoo artist make Henrik’s face on your back bigger. However, much like most of their careers, the Sedins will most likely gain more appreciation the longer time passes.

Most people in Vancouver know this script already.

Drafted at a young age, the Twins came in with big expectations. Perhaps fueled by the arcade action of NHL ’99, some people were wondering if a hundred point rookie seasons were possible. The Sedins got off to a much slower start than that of course. They had to learn to ply their trade from the bottom up, using the shadows of the West Coast Express to give them time to adjust to the NHL. They had to learn how to elevate less skilled teammates, working exclusively with Trent Klatt to perfect this. 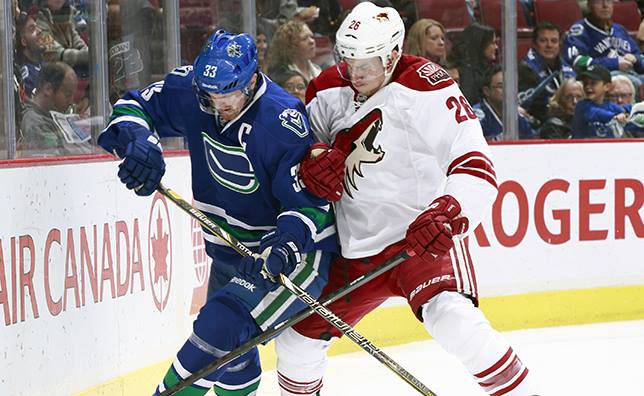 And finally, they came into their own.

Both Daniel and Henrik put out amazing seasonal performances (and did their best to save Anson Carter from himself), before culminating in that infamous 2011 run. Henrik perhaps getting more of the recognition due to being a captain and having to play centre.

Always leading by example, whether it by doing charity work, or playing through injuries or never complaining. It’s gotten to the point where people in Vancouver have gotten so on board the “Respect the Sedin!” train that it’s probably tiring to hear about to fans in other cities.

But there is a reason Vancouver fans are so defensive about the Sedins. Part of it’s because they haven’t won a Cup which would have given them an automatic pass as “all-time greats” to some people. Part of it is because to this day people still call them “sisters” and question their toughness.

Part of it is because in this day and age, the dark side of athletes gets exposed on social media easier than ever before, making the Sedins stand out as good will ambassadors.

Fair or not, sports players represent their city, and you can sleep easier at night knowing Henrik and Daniel are the face of the Canucks franchise. The worst headline you’re most likely going to read about the Sedins is how they didn’t have enough time to spend all day at a charity, so they had to re-schedule for two more days.

And while it’s often times hard to separate the Twins from each other (through appearance or discussions of their careers), this article is about Henrik, so let’s veer back to his accomplishments quickly:

It’s funny to think of it now, but at one point a heavy debate arose about who should be made captain, Ryan Kesler or Henrik Sedin. Mirrored to an extent by the “Naslund vs Jovanovski” captaincy debate years earlier, there was still a stigma about handing out the captaincy to a “soft spoken” European over an “all guts” kind of guy like Kesler.

Fast forward to today, and it’s hard to imagine how the city would have taken seeing their captain demanding a trade out of the city because he wants nothing to do with a rebuild. The Canucks made the right decision, and are now so far at the other end of the spectrum that were they to ever trade the Sedins to allow them to chase the Cup, they’d most likely have to threaten them just to get them to accept a trade.

“Go on, get out of here! GET OUT OF HERE I SAID!” screamed Jim Benning, tears streaming down his face as he threw rocks at Henrik Sedin in the woods.

Which brings us back to 1141 games played, and counting.

In a city that can chew players up and spit them out, Henrik Sedin has not only lasted through 1141 games, he has excelled, both on and off the ice. Hank, along with his brother Daniel, have brought a level of hockey that will be hard to match for future generations. Whether it is the infamous “Sedin Shifts” where they seemingly have the puck on a string, spending minutes in the offensive zone, leaving the other team exhausted. Whether it’s the countless told and untold stories of the Sedins generosity. Whether it’s been redefining “tough” in the hockey lexicon, opening people up to the idea of not having to throw big hits to be considered a gritty player. Whether it’s that commercial where the Sedins danced for some dudes in a room.

Whatever it is, the Sedins have left a lasting legacy in this city that any Canucks fan can look back on proudly.

And you know what? We still have a couple more seasons left of them. So enjoy it while it lasts folks, as the Sedins are truly one of a kind.

Wait, two of a kind?

You know what I meant.