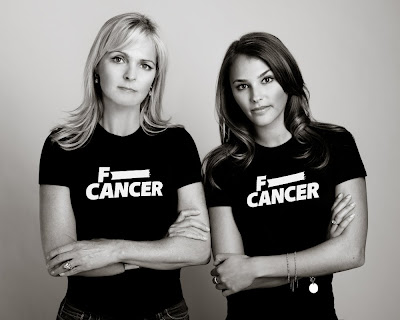 Did you know that over 90% of cancers are CURABLE if caught in stage one? That’s right, so why not give cancer a kick in the ass through early detection! This is not a request for donations. You don’t need to run ten kilometers or shave your head, not that there is anything wrong with that. “Fuck Cancer” is just about spreading the gospel of early detection and this I feel should be shared with my readers, friends and loved ones.
Lets FCancer (Follow them on twitter and facebook) is a Vancouver-based charity that’s been garnering a lot of support from around the world, and this month the campaign has been a hit in a lot of major cities. Today they are actually doing an awareness push on the streets of NYC during Fashion’s Night out, where a few hundred of their NYC supporters will be wearing proudly their Fuck Cancer t-shirts and promoting awareness for early detection.

1. DO IT: Help get the world talking. Did you know that difficulty eating or feeling full quickly can be an early warning sign of cancer? We provide you with early-warning signs and photos that you post on Facebook, Twitter, blogs, and LinkedIn. Get your entire network talking and get them informed. www.movement.letsFcancer.com
2. SHARE IT: Rally the troops. If everyone who read this was educated on early warning signs, they could easily turn around and educate their friends. Imagine how many lives could be saved if we made education viral? Mobilize your network. Get your friends and family involved in the conversation. The more people we inform the more lives we can save.
3. SAY IT: This is a movement to change the way cancer is perceived and diagnosed in our society and how cancer survivors perceive themselves. It’s about early detection and treatment. It’s about fighting back and regaining control. It’s about sharing your story and spreading the word. Help them by contributing your story and share with your friends. http://www.letsfcancer.com/home.html#/say-it/
Want to get involved? Please sign up at www.movement.letsFcancer.com. In the meantime, throw on your new FCANCER T-shirt in support of the cause.
VancityBuzz.com