Can it get any more Canadian than this? Ice hockey played on a frozen lake 4,000 feet up in Vancouver’s North Shore Mountains, and it involved a special skating stunt by a helicopter.

The stunt by pilot Bradley Friesen was pre-planned and involved eight players boarding four helicopters to fly into the mountains.

After searching for an ice surface thick and large enough to play ice hockey, the helicopter swooped down and skated on the ice between two groups of players before doing a quick 180 degree turn to fly over the players in the direction it came from. A camera attached to the helicopter’s pontoon captured the entire sliding and hovering stunt. 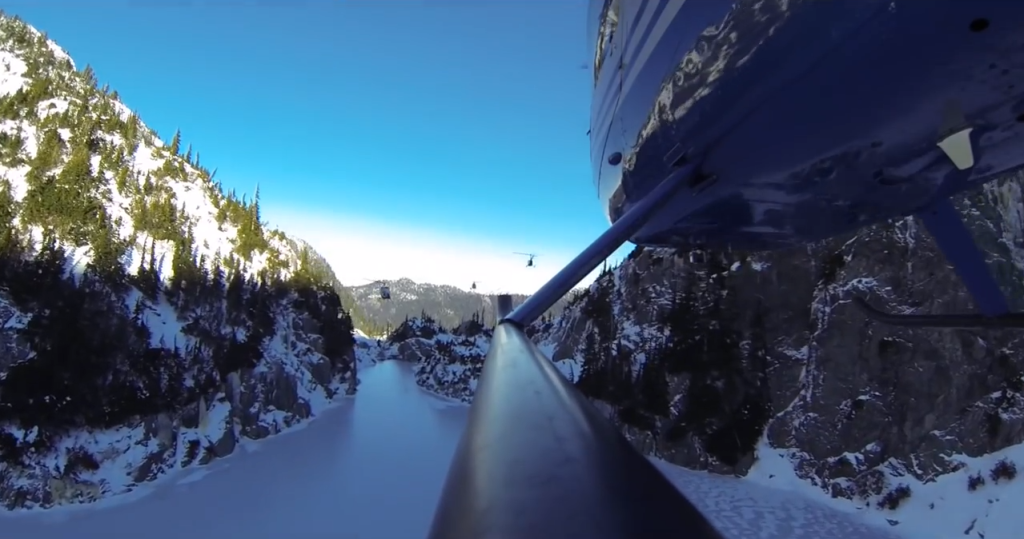 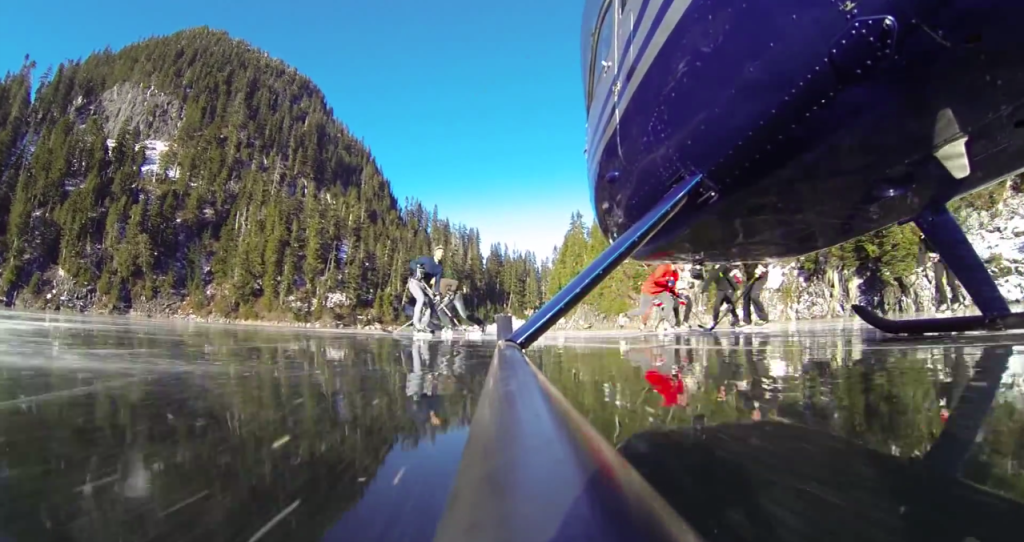 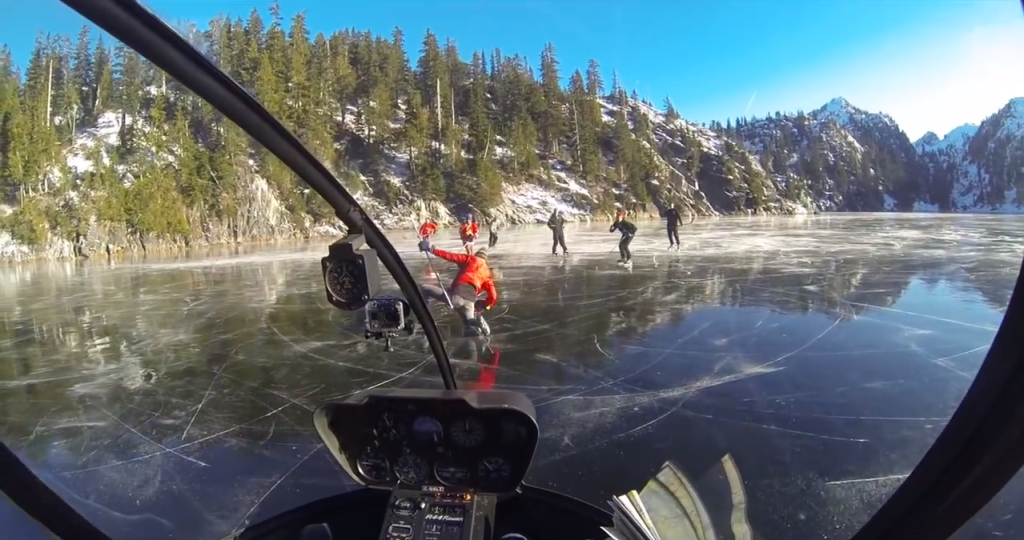 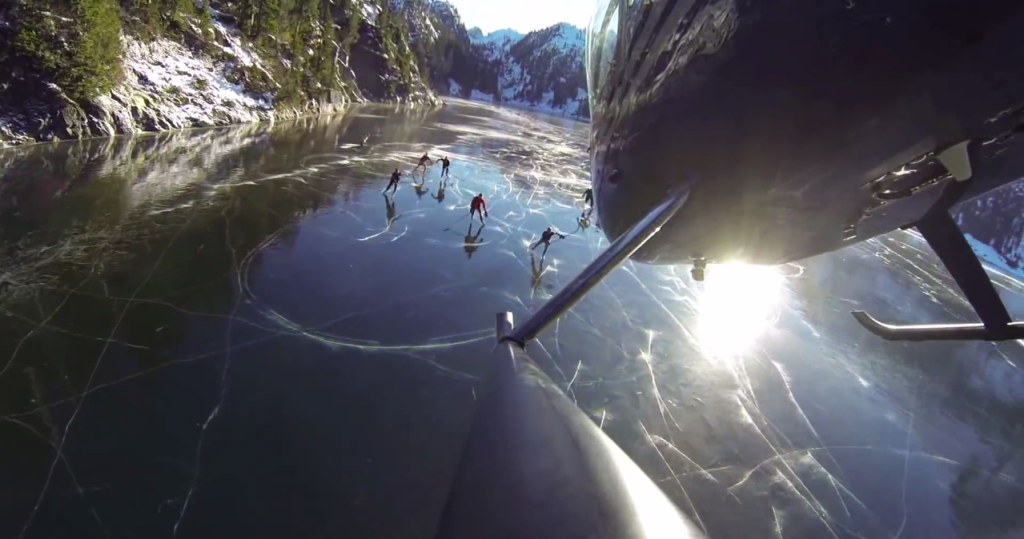 Friesen is an experienced pilot, having flown helicopters for two decades, and was also responsible for this past summer’s North Shore Mountain surprise marriage proposal via helicopter.

In an email to Transport Canada, he argues that the stunt was “done in a safe, and responsible manner, without danger to the aircraft or crew-members on the ‘ground.'” He also uploaded a behind-the-scenes footage video to ease any concerns that the video was performed in an unsafe manner.

Behind the Scenes footage

“I’m sure this is unusual for a pilot to essentially call enforcement on himself, but I put a video online yesterday that I feel might need some explanation. I truly believe it was done in a safe, and responsible manner, without danger to the aircraft or crew-members on the “ground”. Since the video is already generating a lot of World Wide views, I figured it would be best to show you and explain how the video was done.

So, Saturday morning, I took off at 6:30am, and flew up to inspect lakes for the perfect hockey game. I found the exact lake I was looking for, landed on a small raised beach and chopped through the ice with a hatchet and measured. Like I suspected, the ice was more than 10″ thick. By the farmers almanac ice safety chart, that’s thick enough to safely support the weight of a 3.5 ton medium sized truck. More than enough to support the weight of skaters and a light helicopter.

I flew back to YPK, and met 4 buddies who are former WHL hockey players. I flew them 2 at a time back to the lake, and filmed them skating and playing hockey.

When we returned to YPK, we showed pictures and video to other Helicopter pilots who all wanted to be involved in a second day of filming, so, I organized 8 former WHL players and 4 helicopters.

Sunday morning, we all met at YPK for an initial safety briefing, and flew +3 back to the lake with and aStar, H300 and 2 R-44’s. It was -12 overnight, and added more thickness to the sheet. I walked the entire surface with a chainsaw and tape measure, and inspected the whole ice sheet. It was thick all the way across and had no ridges or holes. There was a small section of open water caused by a waterfall at the far end of the lake. We determined a safety line that no skaters were permitted to cross based on our test holes.

The 2 pilots from BC Helicopters brought their hockey equipment and hand held aviation radios to act as coordinators on the ice between the skaters and helicopter.

After a long safety briefing and walk through of the shots we had planned, we began filming. One of our first shots of the day was the video I would like to share with you. It involved the 8 skaters, 6 former WHL players and 2 BC Helicopter pilots standing in a row across the ice with a small hole between them. The 2 BC Helicopter pilots were located on the left side, and the 6 WHL players on the right. I started from a hover, 200 meters down the ice, and slowly descended onto the ice surface at a speed of 15 kts. and slid across the ice towards the group, aiming my nose at the hole they left form me between the BC Helicopter pilots and the WHL players.

As I approached, the pilots from BC Helicopters called an audible signal for all the parties to move, opening a much larger hole which I continued to slide the helicopter through. We purposely placed the 2 helicopter pilots on my left side, to keep any of the WHL players as far from the tail-rotor as possible. Once I was completely past the group, I waited 2 seconds before initiating a left peddle turn while lifting into the air, to capture the entire group skating towards me.

Again. I believe this was done in a completely safe and responsible manor. All risks and possible safety hazards were discussed with the crew. Every person acknowledged the possible risks and decided to be involved with their own free will. We took precautions to place people in the appropriate positions for maximum tail-rotor safety. We had 3 helicopters on standby should any incident occur and first aid trained individuals as part of the extended group.