Could this be Vancouver’s most romantic marriage proposal yet? Lisa Millar-Jones had the surprise of her life when a planned helicopter ride to a photo shoot location in the city’s mountains turned into a marriage proposal.

She did not expect to see her boyfriend Dave Brown to be waiting atop a mountain. He was wearing a suit and was prepared to pop the question with a ring.

Millar-Jones had organized the mountain photo shoot for a project she was working on. The plan was to have her friend and helicopter pilot Bradley Friesen fly her, a photographer, and local model Sarah Porchetta for a photo shoot on the peak of a 5,000-foot tall mountain near Widgeon Lake in Pinecone Burke Provincial Park.

When Brown found out about her project, he called her pilot friend and the two men devised the logistics of the mountaintop marriage proposal together.

Video of the stunning flight and romantic proposal:

Read this behind the scenes story of how plans for the marriage proposal unfolded:

My name is Bradley, and I’ve been a Commercial Helicopter Pilot for about 22 years and have been lucky enough to have a helicopter I’m able to rent for private use from time to time.

In May of 2013, a friend of mine Lisa, who is an aspiring photo-stylist approached me and asked if I would help her build her portfolio. She had an idea for a photo-shoot on top of a mountain with her best friend, the extremely gorgeous Sarah Porchetta. I quickly agreed to help, and we decided to be in touch to work out the details.

The next morning, Lisa’s long term boyfriend, and good friend of mine Dave called me excitedly and asked if he could come along on the shoot to propose to Lisa on top of the mountain during the shoot. From there, we started scheming on how to hijack Lisa’s shoot, and turn it into Dave’s proposal to her…

I pitched our idea to a few other helicopter pilots I know, and they both loved the concept and agreed to donate their time to help pull it off. I also told the idea to my friend Dan Rizzuto who has a small video and production company. He, along with 2 other cameramen also donated their days to film and edit the video. We had planned to edit the video quite different than show here, but because of pilot error, all the audio from the helicopter the girl flew in was lost. My bad. Actually, it was my iphone’s fault to be honest.

On the day of the shoot, Sarah had to spend 3 to 4 hours getting her hair and makeup done. Lisa spent weeks planning the outfits and the looks she wanted captured. They found a really great photographer, Natalia to capture it all…

I met with Dave, and the map you can see in the beginning of the video is my depiction of where everyone would be standing and hiding. Yeah, looked like a 4 year old drew it. The blue ink was the snow. My buddy Dan then drove Dave to the airport, and they flew to the mountain to get ready.

I picked up the girls about an hour and a half later to start our journey to the mountain top. I told the girls I was going to make a video, so that they should dress up a bit, but, they ignored me. That was my excuse for having so many Gopros. 10 minutes before takeoff, I text the photographer Natalia and told her that this wasn’t actually a Photoshoot, but an engagement and to be ready with the proper lens.

We flew into the mountains, and met-up up with the other two helicopters “by fluke”. “Hey, is that you Chris? Weird, what are you doing here?”

When we approached the mountain, I got low so Dave was silhouetted against the sky. I said to the girls, “weird, there is someone standing on that mountain, right where we are landing…” Lisa leaned forward to look, and then could see just a tiny person standing on the peak.

As we got closer, I said, “I hope that person moves, because that is right where I’m landing…” and then, when you could see it was someone in a suit, I said, “That guy looks like he is wearing a suit!” Again Lisa leaned forward and said, “yeah, weird…”

We kept getting closer and closer, I was glancing at Lisa to see when she noticed who it was. Suddenly, when we are about 50 feet away, and I can now tell it’s Dave, she leaned forward and said, “What the [email protected]#$?”. She looked at me, and I was smiling at her, and that’s when she threw her head back in realization. You could see her mind racing as to why he was there, and I think it finally all came together when we landed on the snow.

Photos of the helicopter mountaintop proposal 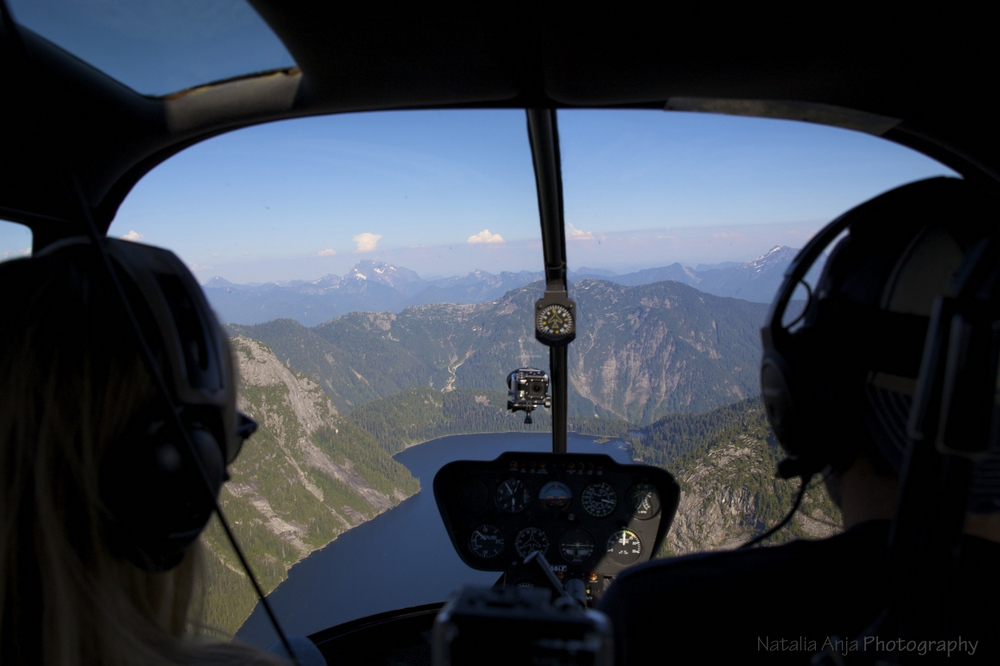 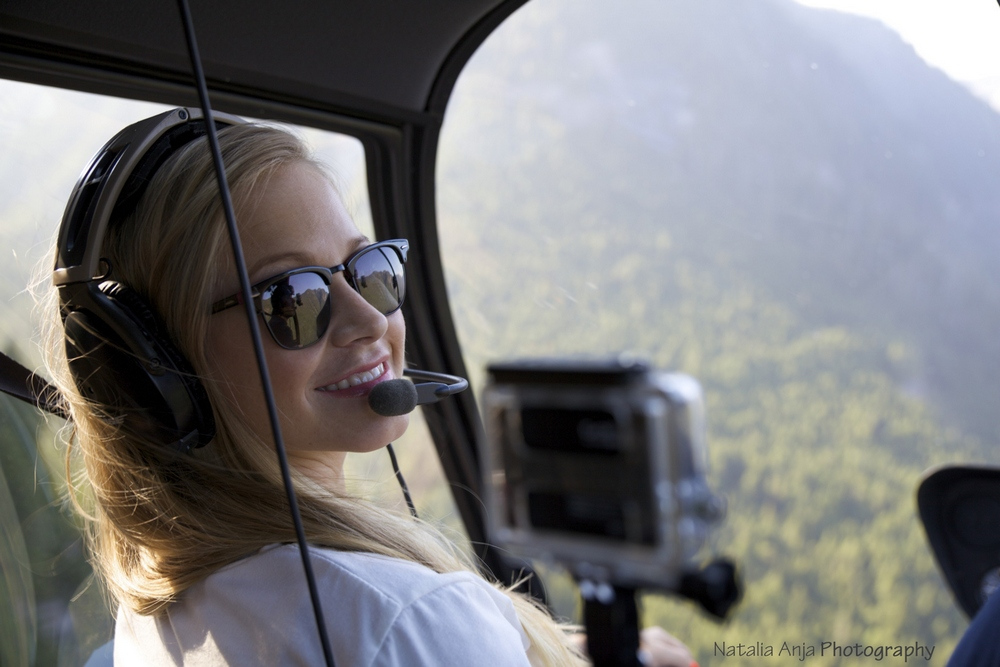 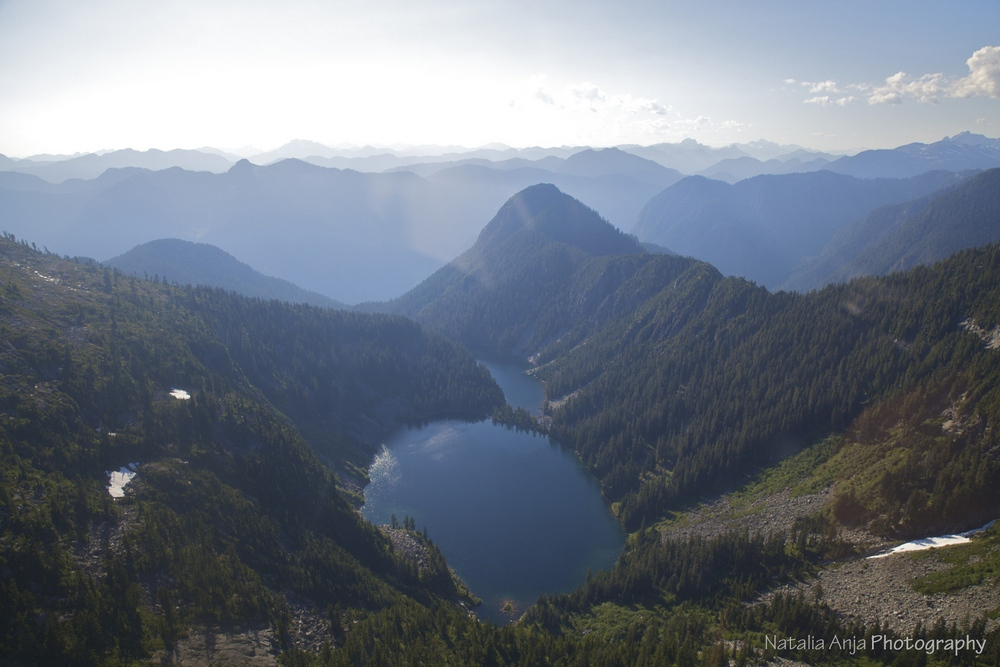 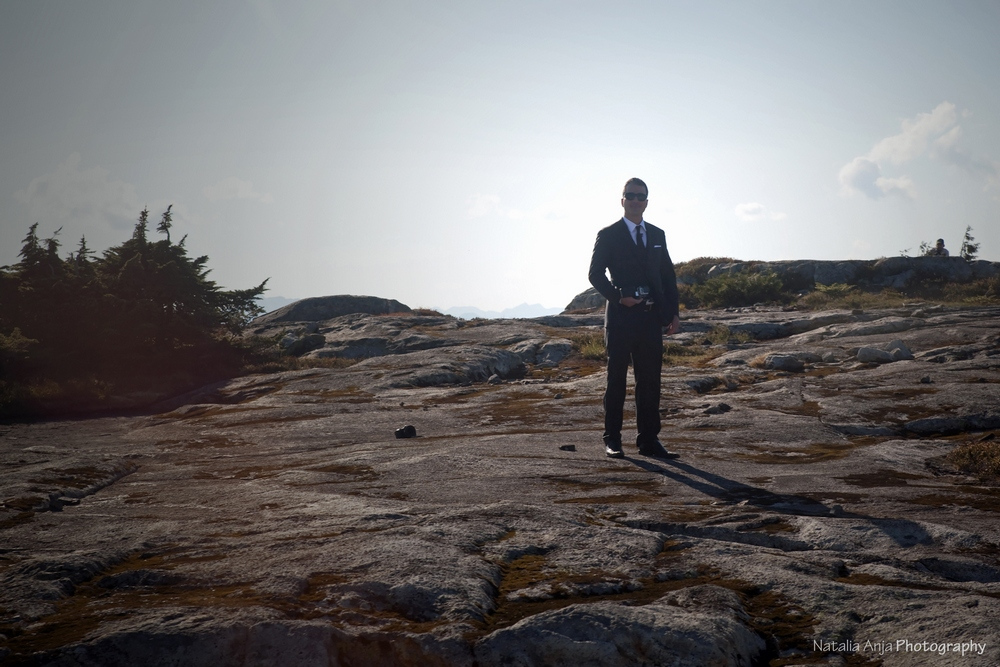 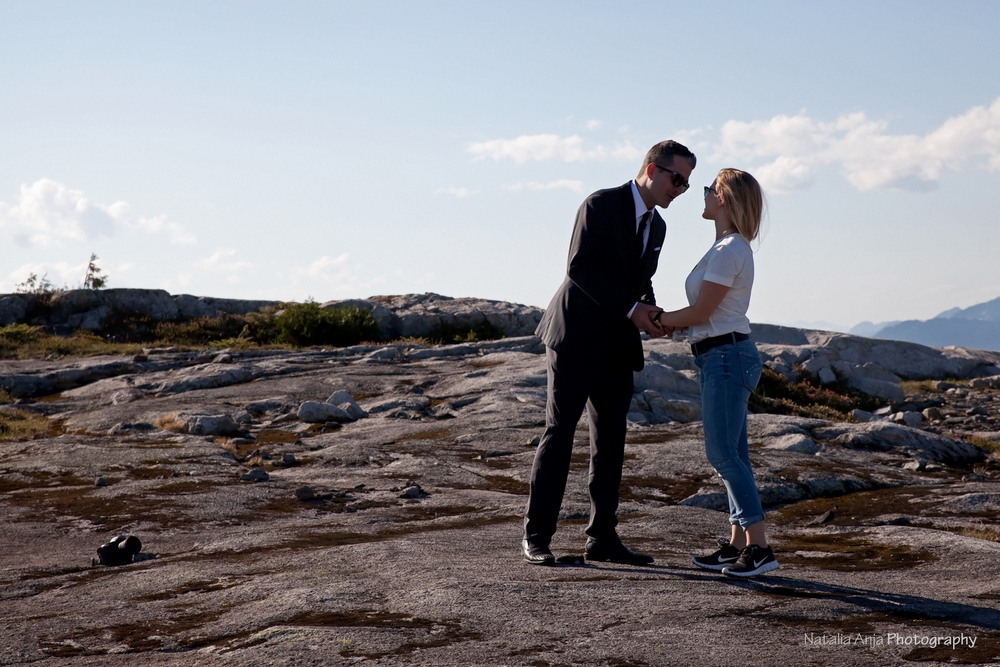 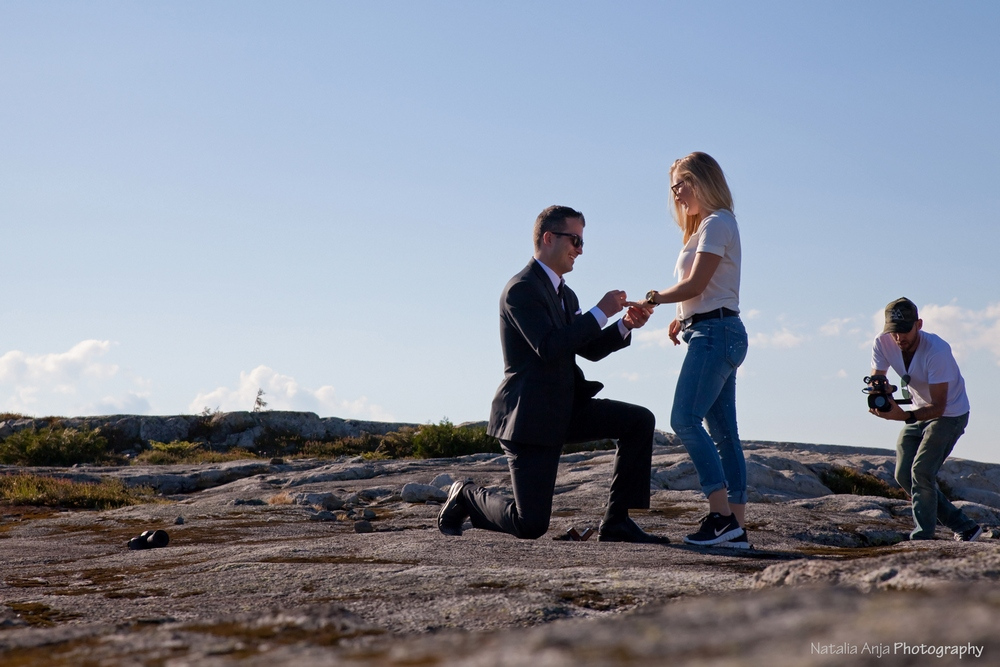 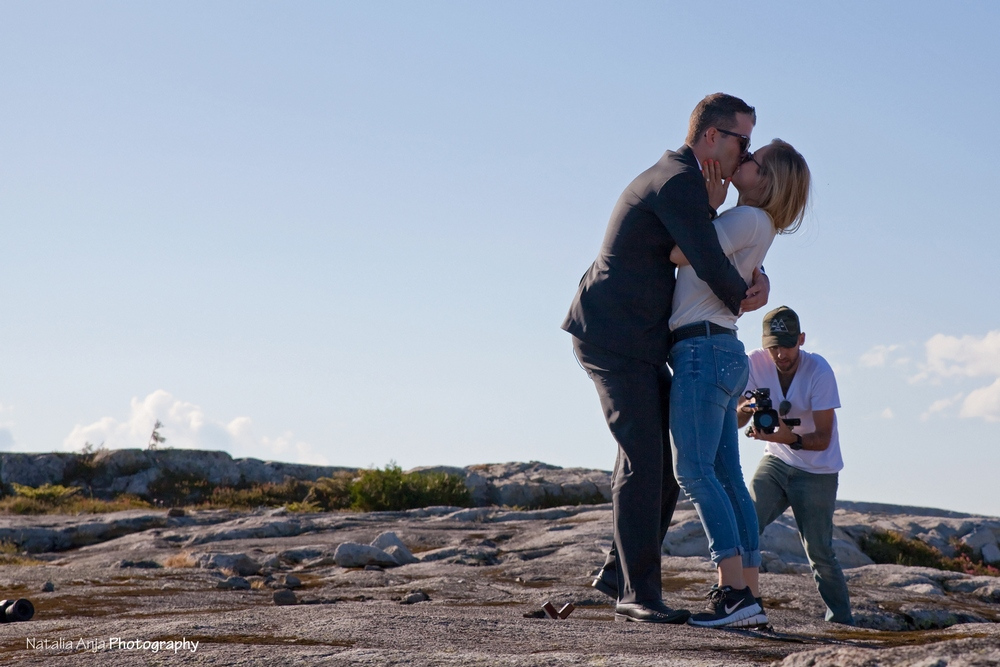 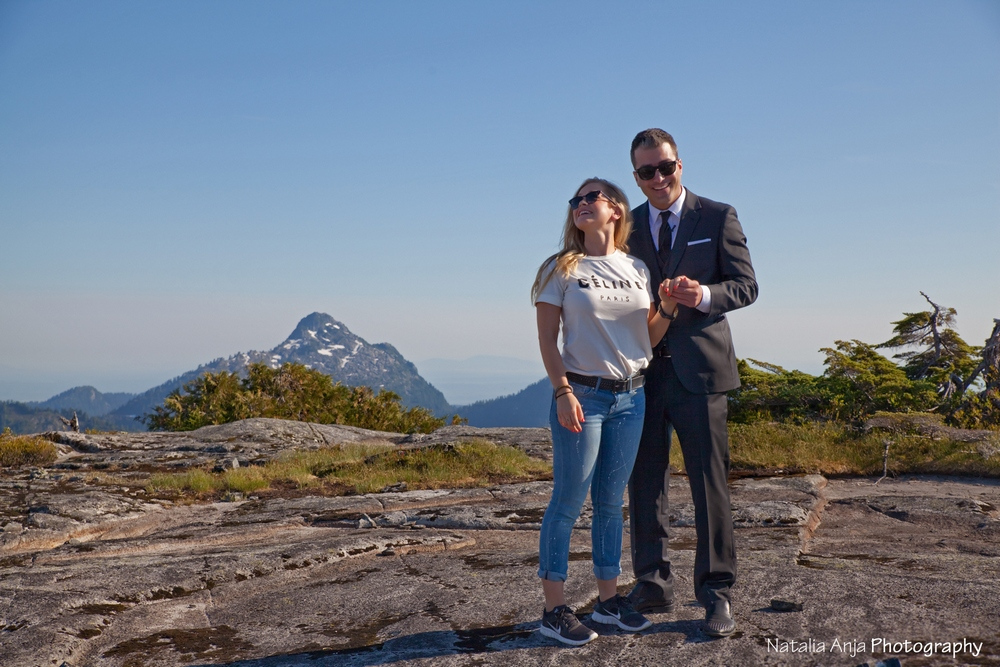 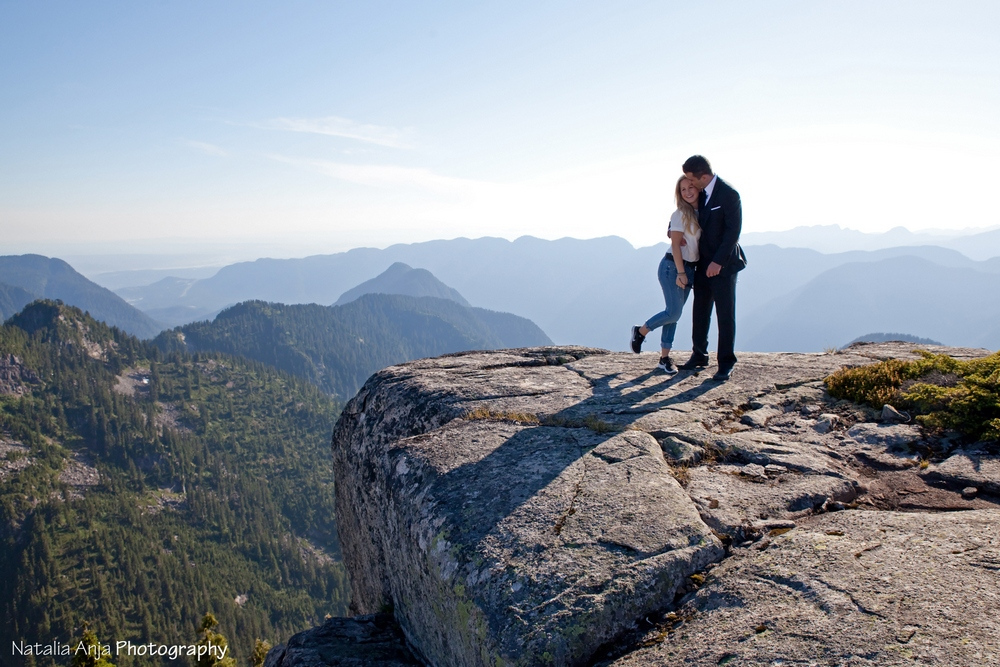 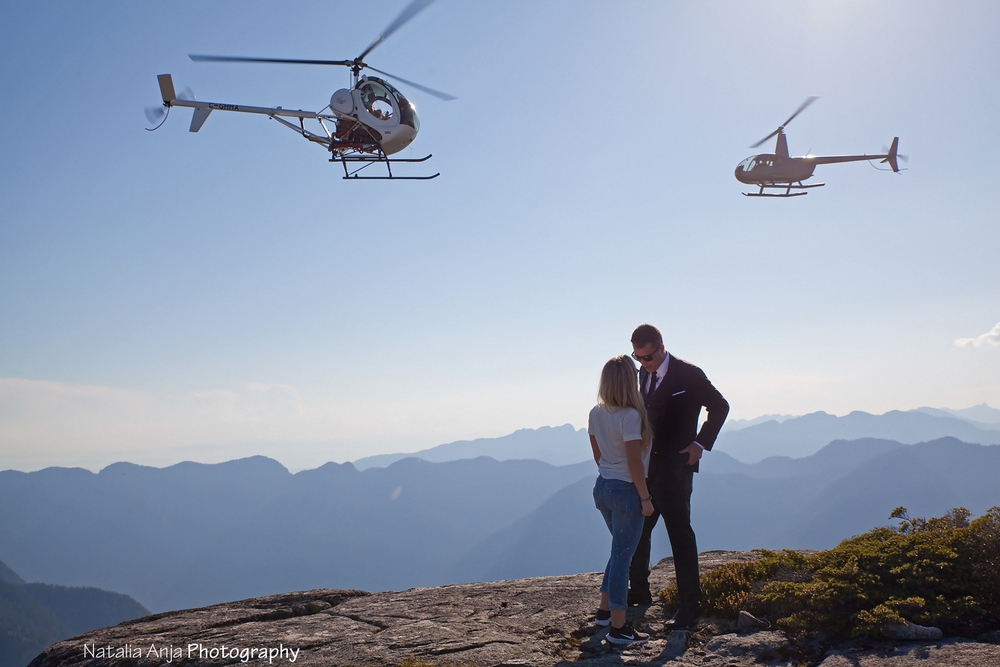 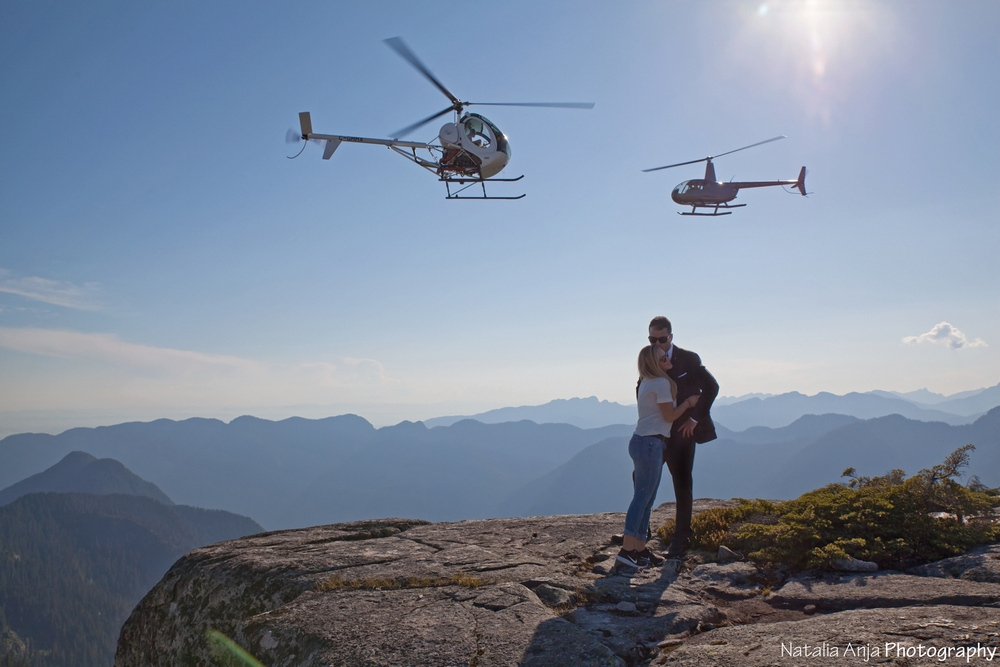 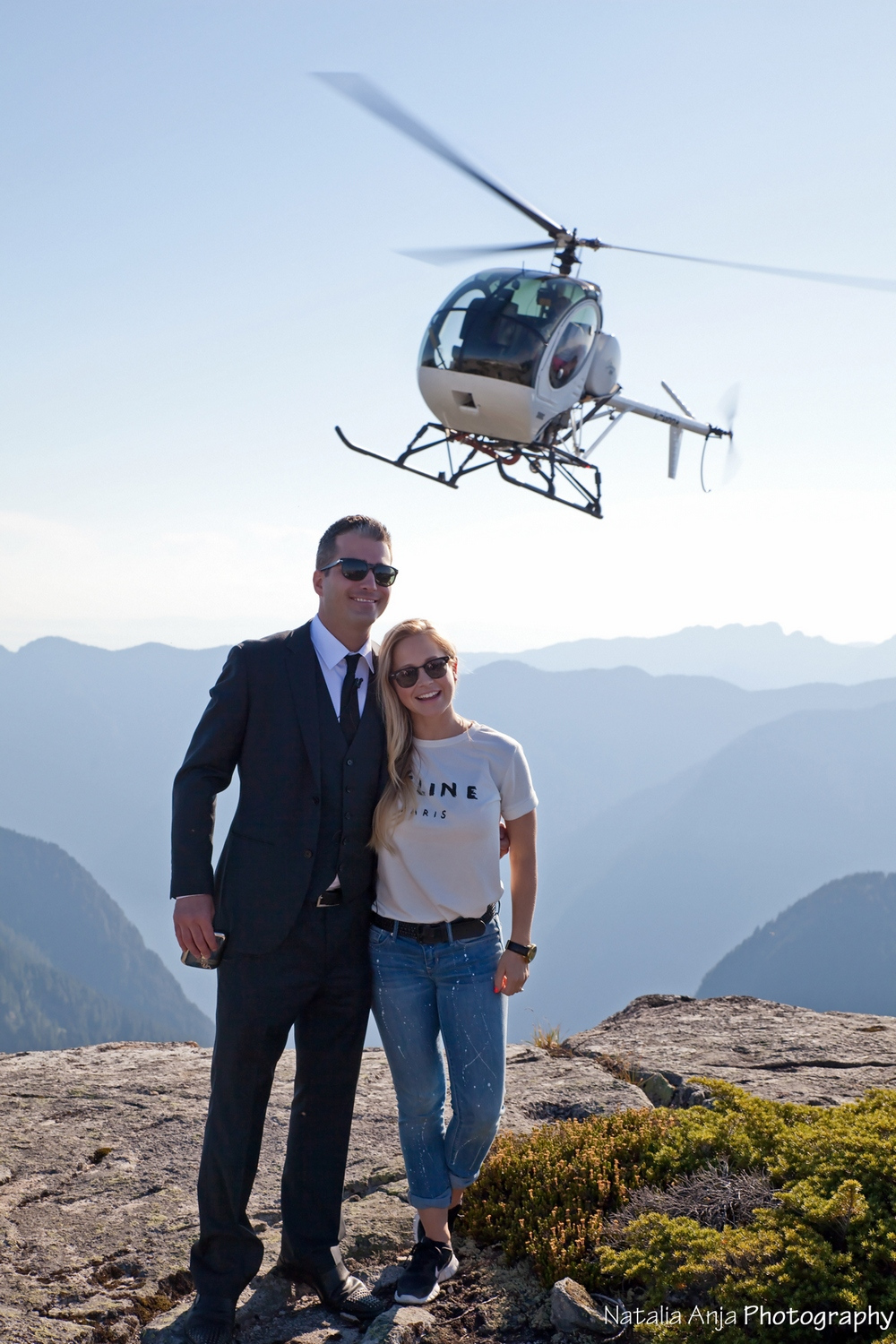 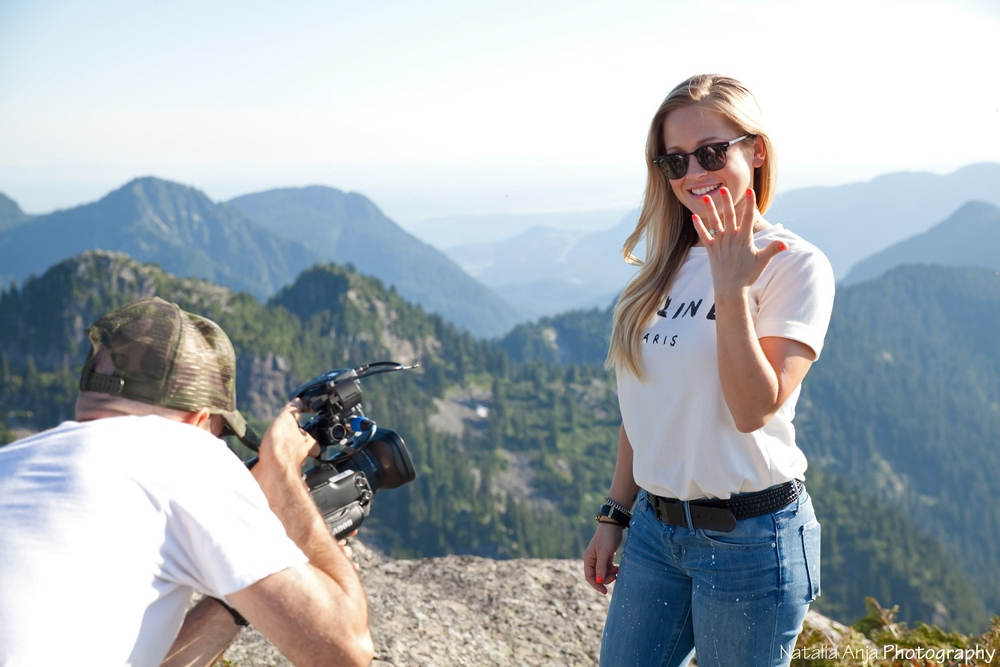 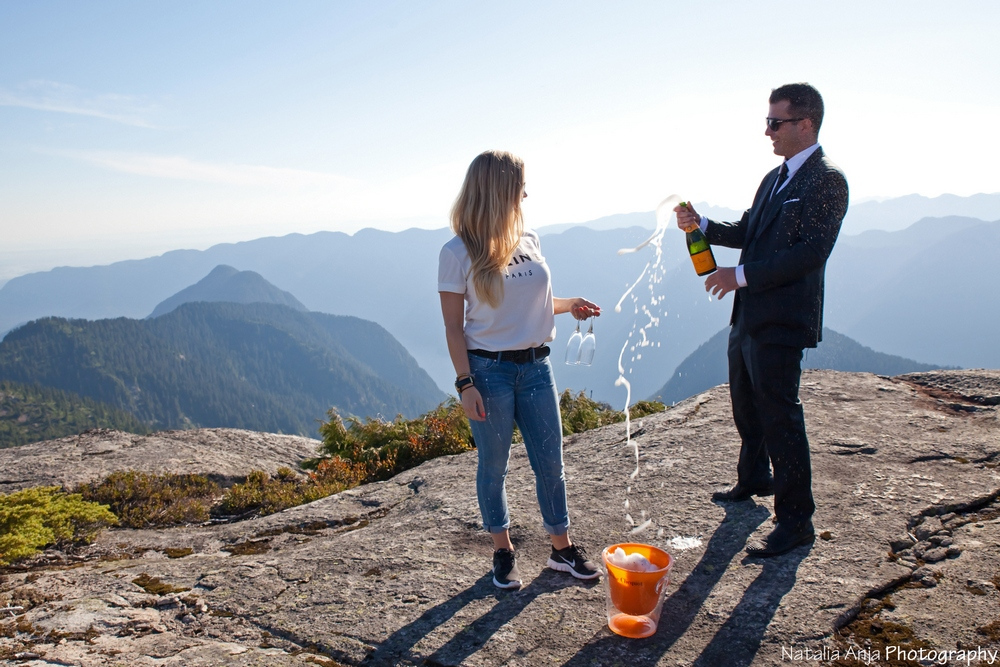 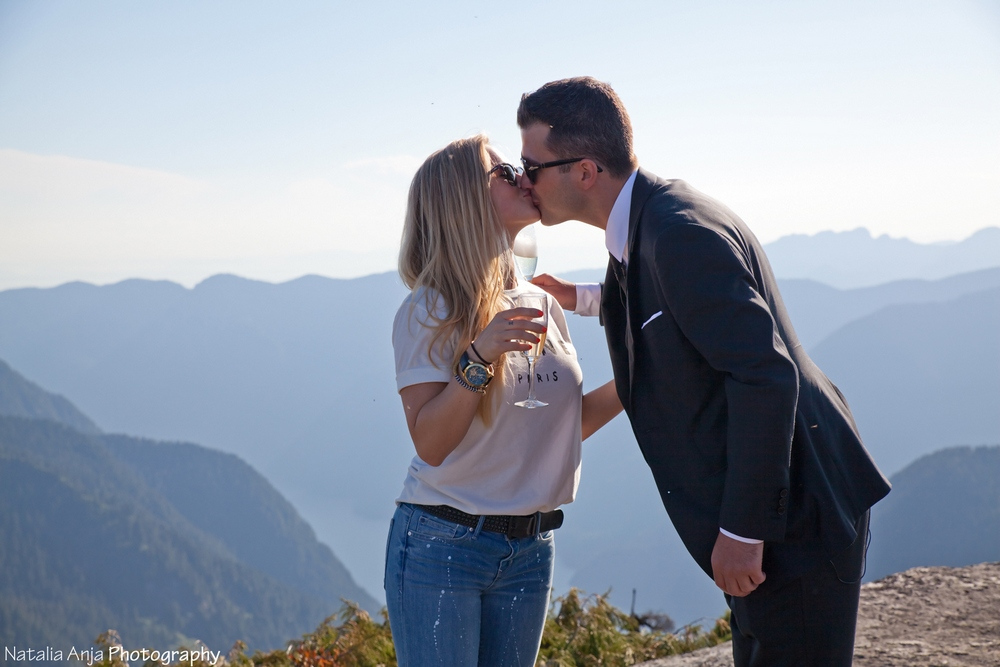 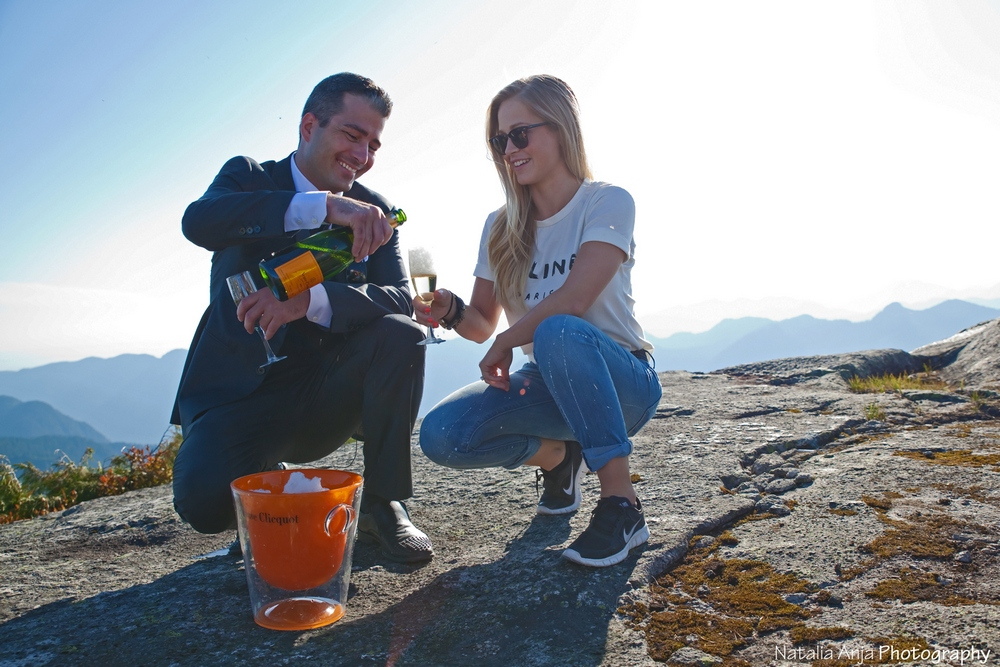 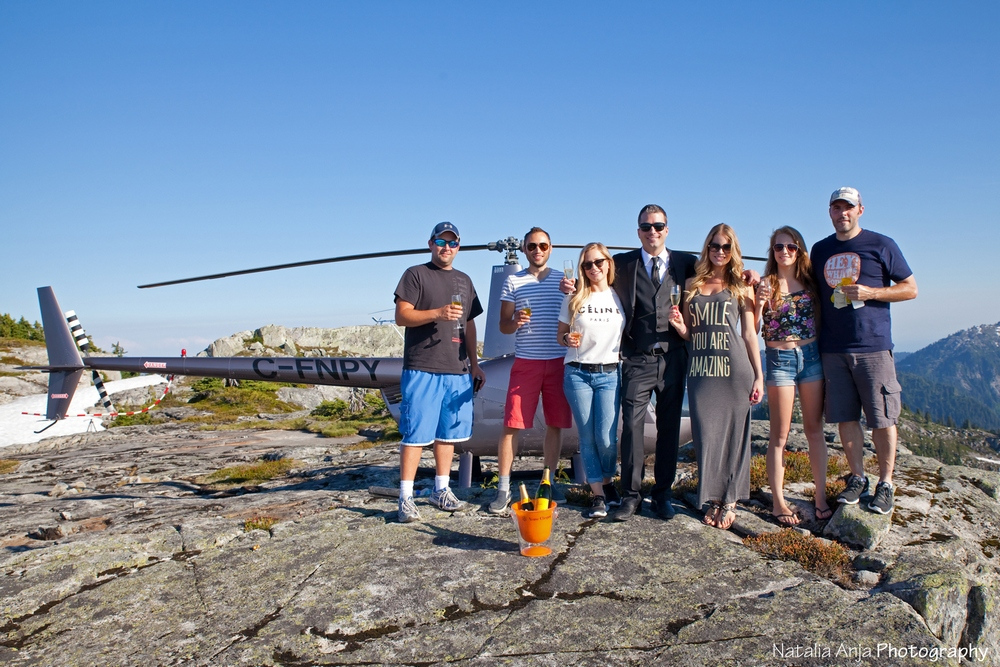 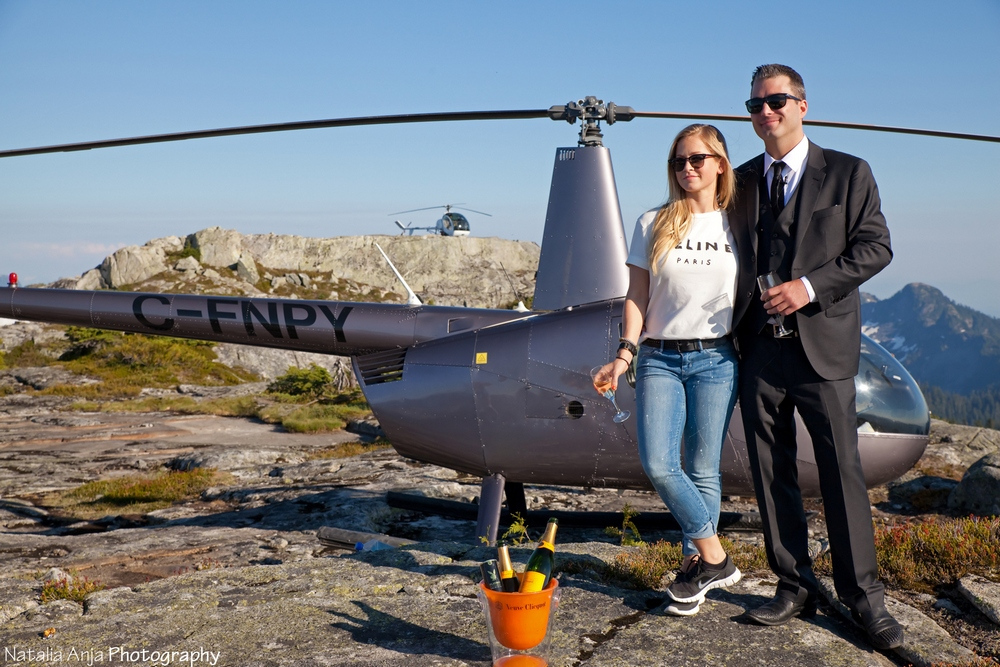 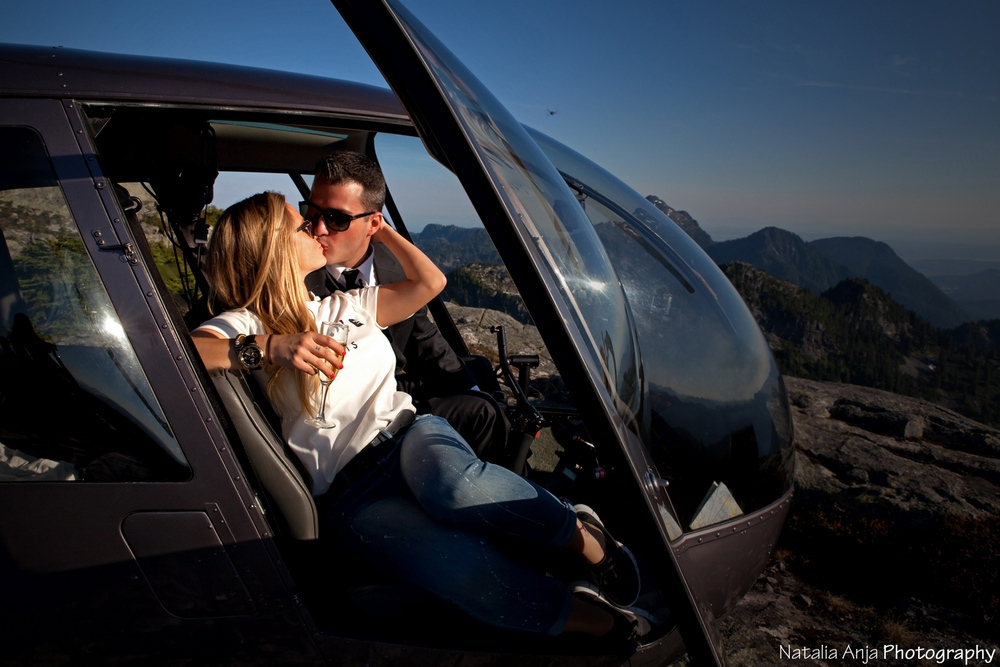 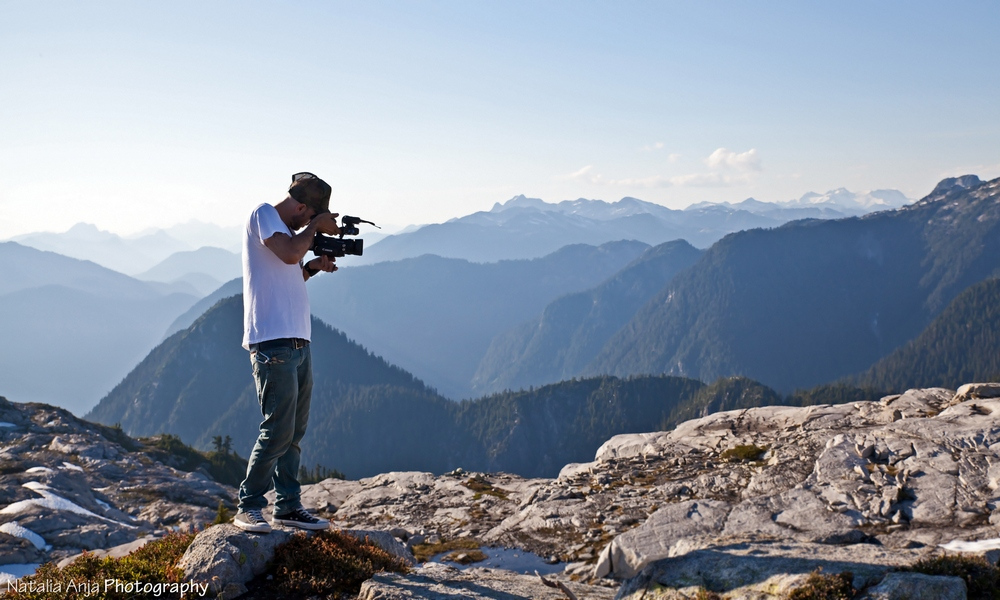 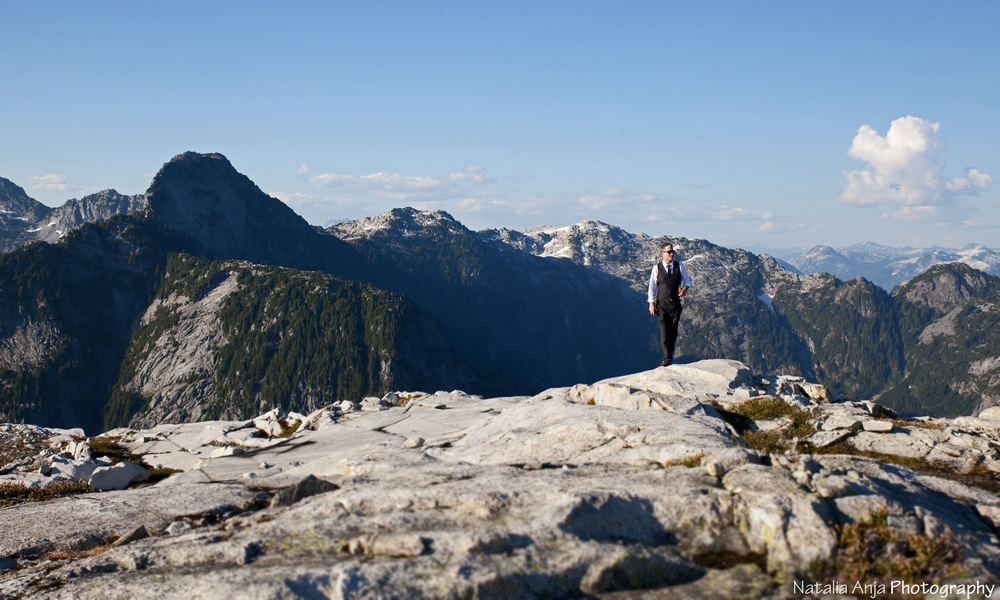 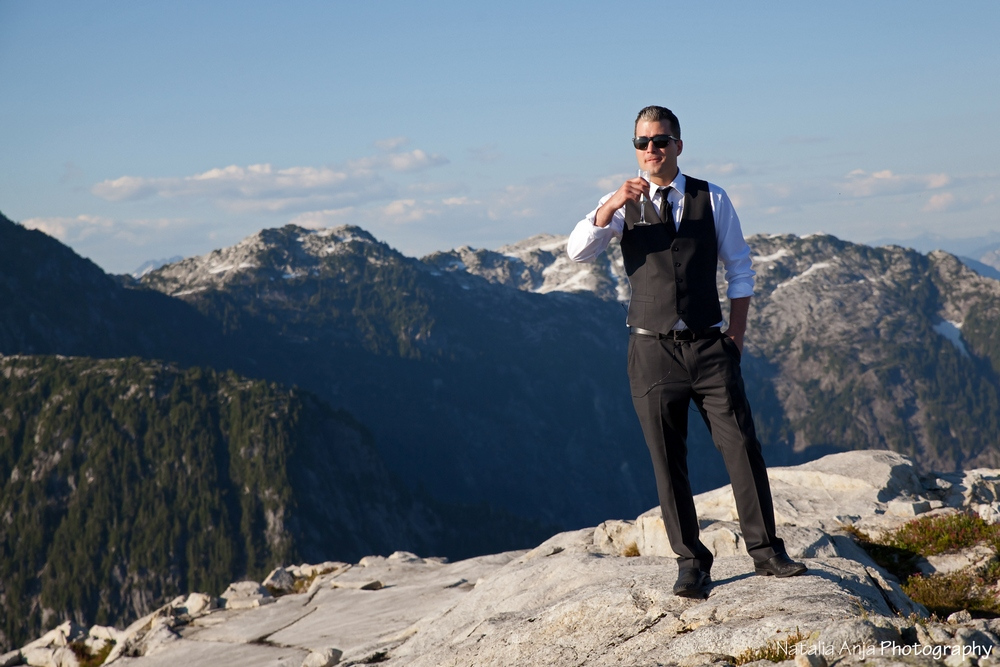 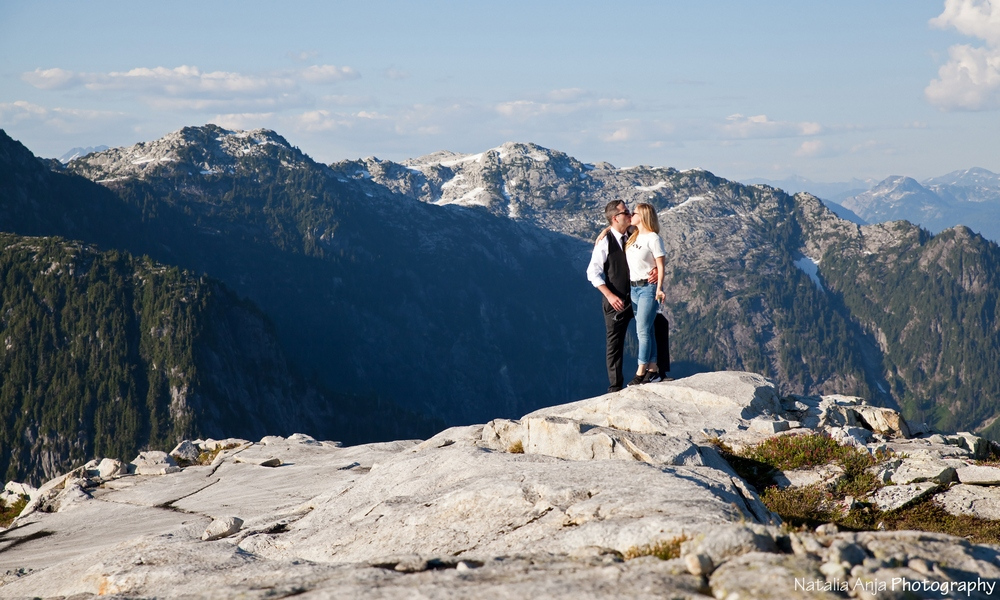 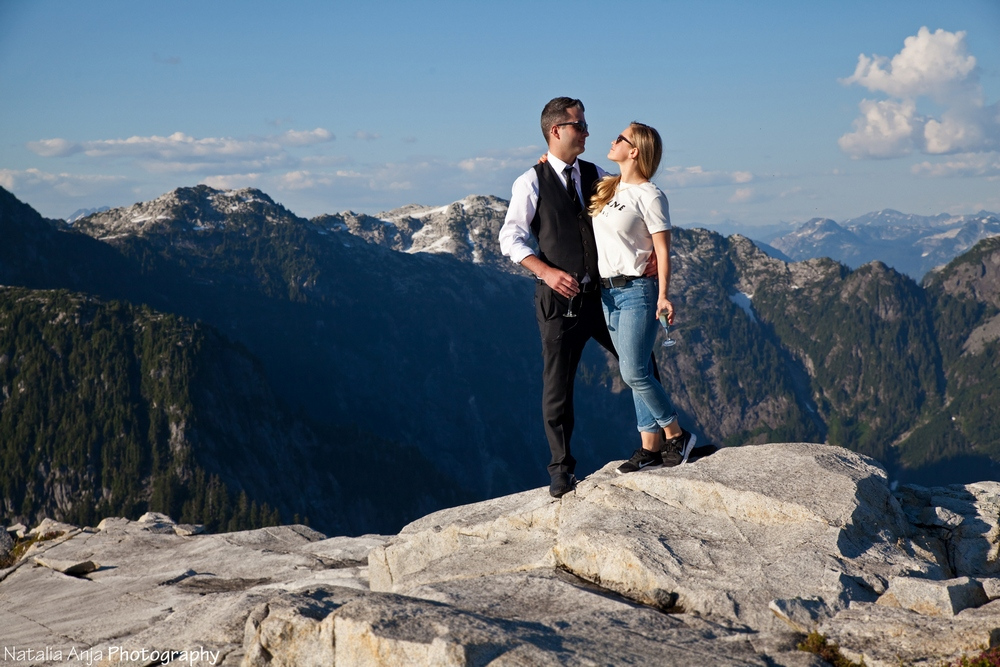 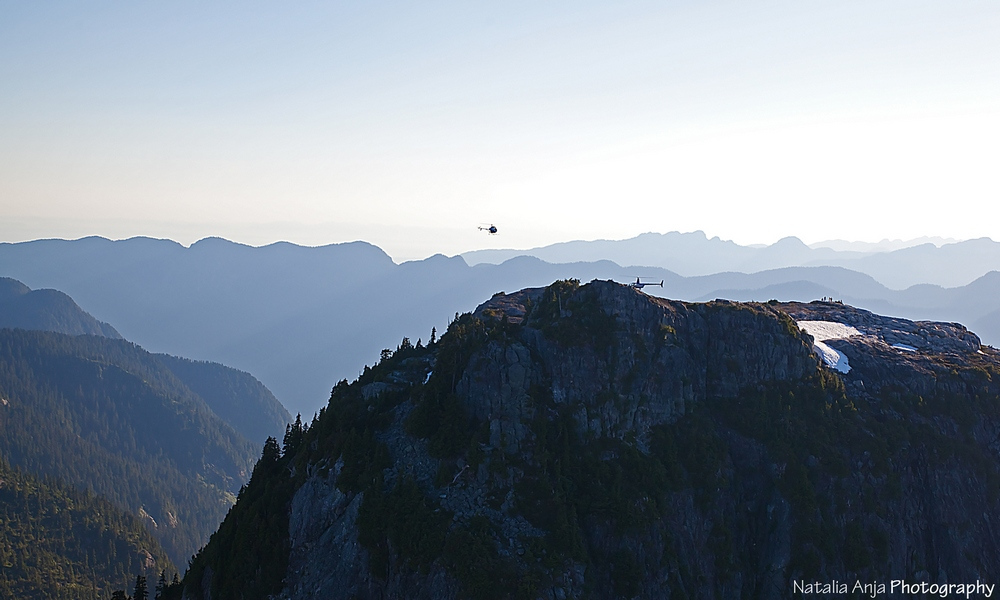 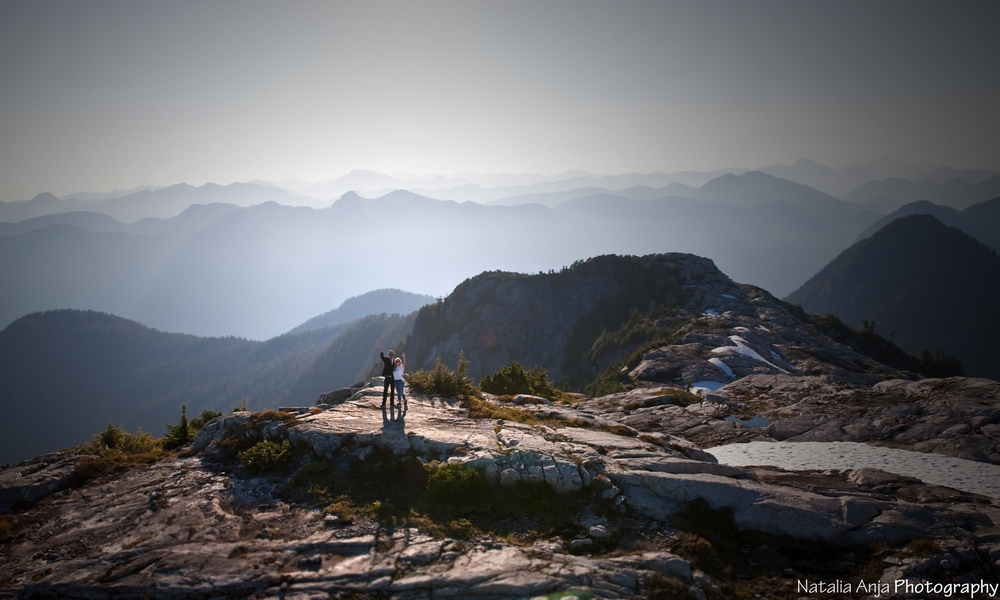 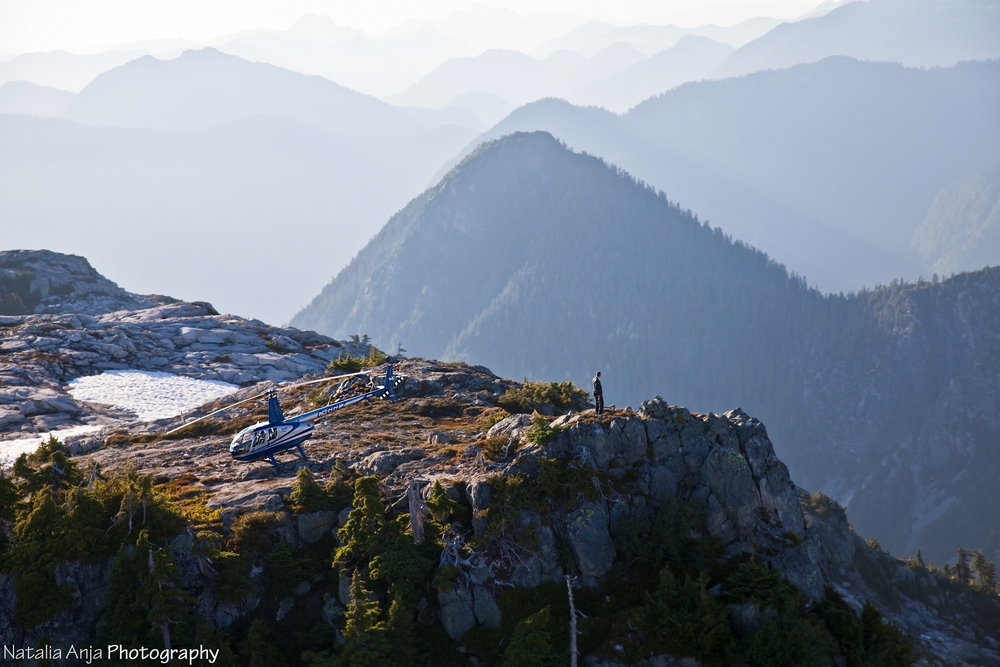 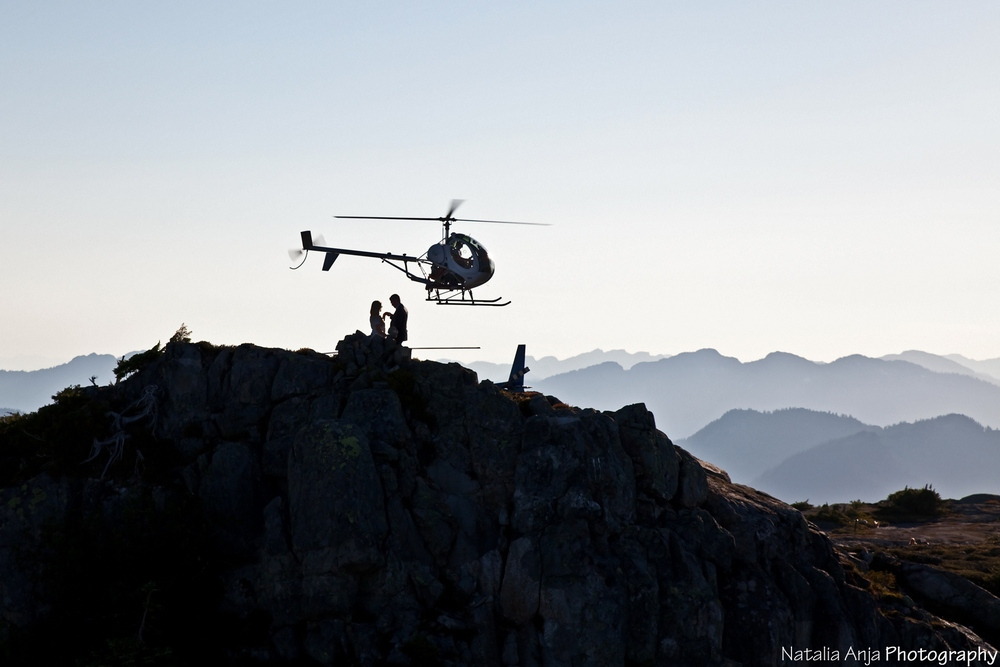