This idea came to me January 2012. My bookshelf was too small for my growing book collection, and I was finding that each new book I bought was being piled beside it instead of on it, creating a vertical library of sorts, or pillars of books rising up from my bedroom floor like spines made of paper.

I decided to start from scratch and challenge myself to read the equivalent of my height in books (5’5) by the end of that year. After each book I wrote a review and slowly began the journey.

Then a few things happened: full-time school, a couple of jobs all at once and a trip to Europe.

Two years and 59 books later, the project is complete.

Here are some tips if you want to read more

Keep a book on you at all times

It’s incredible how many moments in a day I can find time to read a few pages; waiting for a friend, on the skytrain, walking somewhere, sitting in the car, before work, after work, before it gets dark, instead of watching TV, instead of checking my phone.

I have always imagined a book like some sort of portal; I can zap right into it, live there for a while, and then zoom back out into my own life.

This is why I am usually reading a minimum of three books at a time because it’s like having access to numerous lives that satisfy whatever mood I’m in. There is never a time when I don’t feel like reading, because there is always a character or a situation that can give me what I need or tell me something I don’t know.

Don’t be afraid to start small and simple

Nicholas Sparks, Jodi Picoult, even E.L James if it will get you started. Force yourself to be curious and that portal will grow wider as your awareness does.

To me, a book is something to be devoured, ingested, so it swims in your system and becomes a part of your being. I see these books stacked up beside me and I realize that every single one of them has become something I can talk about, part of my vocabulary, my references and my recommendations.

Every book and every inch, contributed to who I am today, in some way, and altered the ways in which I interact with the world around me.

Some challenged my viewpoints, others reaffirmed them, some angered me, made me weep, kept me up at night, made me question, made me wonder. Some lines awakened a longing within me to do more or to change something, some books made me ask why things are the way they are and what I can do about it. Some stuck with me like a low hanging cloud, others passed by like a soft breeze, giving me no more than a brief shudder before it was gone and forgotten.

There are many places to read a book, obviously a couch comes to mind, but my favorite is sitting in a coffee shop by myself. You can often find me in the corner with one black coffee, three books and a laptop.

If there is something I don’t understand, a word or a reference, I look it up, I repeat it, I learn.

I like my books to look worn, so don’t ever let me borrow them. I jam them in my bag, I fold the pages, I cry big chunky mascara streaks on them, I wipe my fingers on them while I’m eating popcorn, I flip pages after doing my makeup leaving behind little golden footprints, if I’m sweaty, the book gets sweaty, and don’t think I’ll let a little rain stop me.

Once upon a time in New York, I was nannying some snotty kids whom I hated. I tried to ignore them unless absolutely necessary, and to save myself from having play with them when I was technically “off duty” I stayed outside, in a rainstorm, on a lawn chair, reading.

My book was so soggy after an hour of resilience that I had to dry it out on the vent that night, as I lay beside a snoring four-year-old who bit me because it was bedtime. Another story, another life.

I have now challenged myself to read 50 books in one year, instead of almost 60 books in two years. That’s about one book a week for all of 2015.

I welcome you to join me, as I embark on another challenge, and another “My Height in Books,” from the ground up. 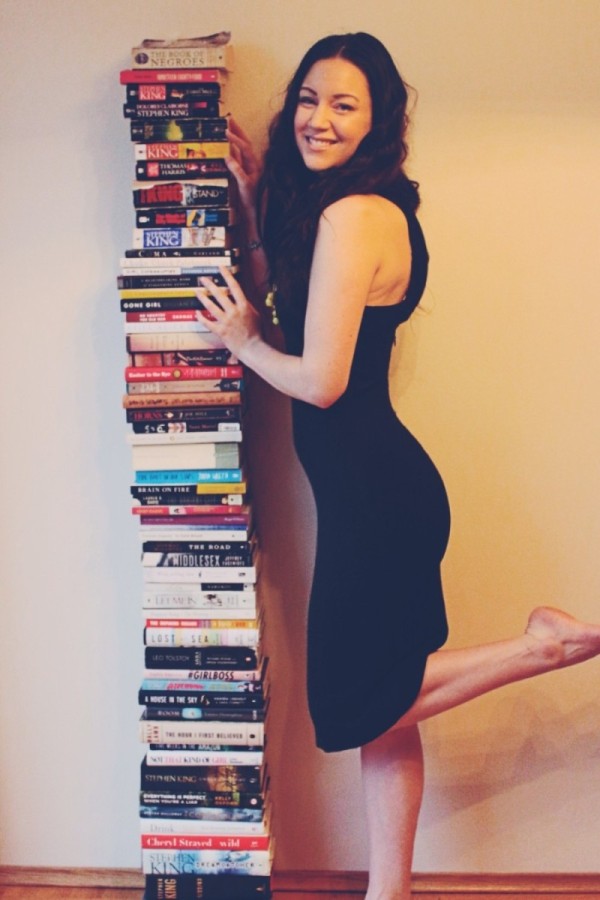