An open fire ban has ben enacted for much of the southern area of British Columbia in an effort to prevent forest fires ahead of the forecasted heat wave this weekend.

Conditions in B.C.’s forests are currently tinder dry and it is expected that rising temperatures, followed by months of abnormally mild and dry weather, will raise the wildfire risk exponentially.

The ban will go into effect on Saturday, June 27 at noon within all B.C. Parks, crown lands and private lands identified by the Coastal Fire Centre as prohibited areas for open fires, including campfires, backyard burning, land-clearing burn piles, burning barrels, fireworks, firecrackers and sky lanterns. At this time, the provincial-level ban does not apply to stoves that use gas, propane or briquettes.

Open fires will only be permitted on northern Vancouver Island, the mid-coast portion of the mainland and on Haida Gwaii.

Anyone caught violating the open burning prohibition could face a ticket of $345, be required to pay an administrative penalty of $10,000 or, if convicted in court, fined up to $100,000. Individuals could also receive a one year jail sentence and be responsible for the firefighting costs if their open fire leads to a wildfire.

However, the provincial-level ban does not apply within municipal government jurisdictions, although some municipalities such as West Vancouver have implemented their own bans on campfires and fireworks as a precaution.

“Given that summer has arrived early and conditions are extremely dry, we want the public to practise summer fire safety,” said West Vancouver fire chief Randy Heath in a statement. “Banning the use of charcoal and briquette barbecues is a preventative step towards ensuring there are fewer accidental fires. The disposal of hot coals, even in designated areas, is banned at this time in order to keep our parks safe.”

Over the past few weeks, there have been multiple fires at Horseshoe Bay, the base of Grouse Mountain near the Grouse Grind entrance, and Deep Cove. Officials have stated that individuals who carelessly disposed of their cigarettes are to blame.

Residents in B.C. are reminded to practice proper fire prevention methods when outdoors:

Click on the image for an enlarged version of the map of B.C. open fire bans. 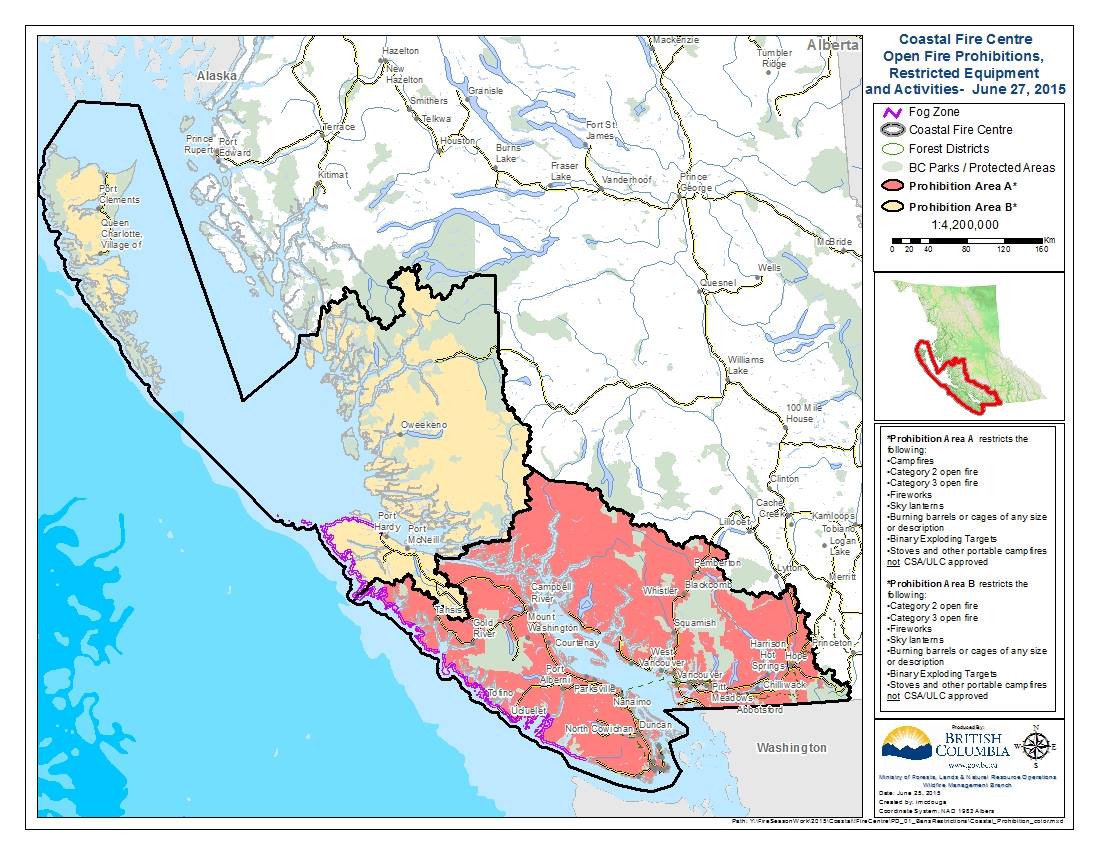