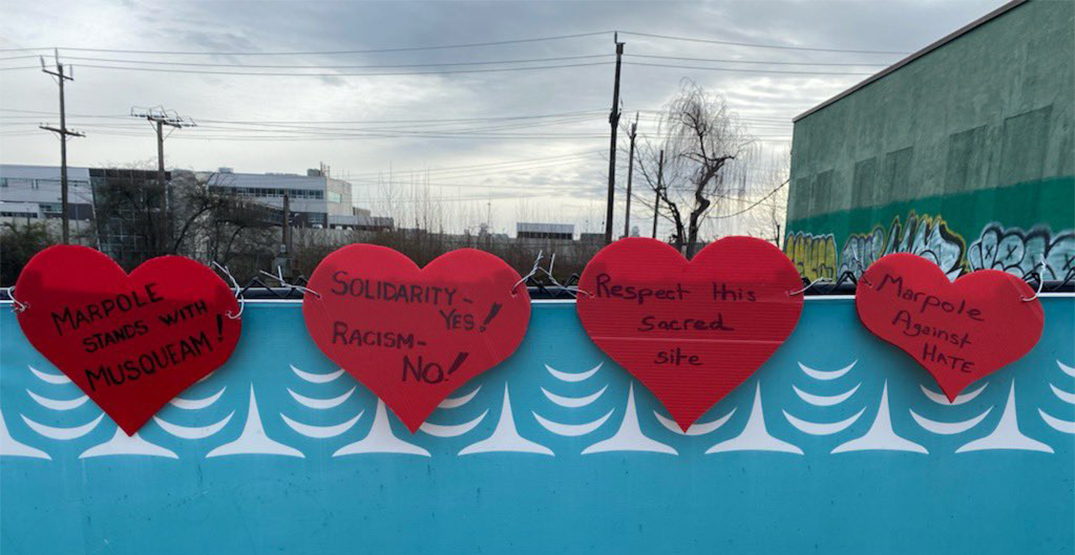 Marpole residents have offered their support to the Musqueam people after a recent incident of vandalism at cesnam village.

Last week someone slashed a banner surrounding the culturally important site in South Vancouver near the ramp to the Arthur Laing Bridge.  On the tattered banner they wrote “this land was made for you and me.”

Wade Grant, a member of the Musqueam Nation, shared his frustration on Twitter.

“I guess some people are not too happy that we are protecting what’s left of our history,” he said. “Racism still exists in Vancouver.”

This happened today at cesnam, a Musqueam village site that is thousands of years old. I guess some people are not too happy that we are protecting what’s left of our history. Racism still exists in Vancouver. #vanpoli #bcpoli @MelissaDeGenova @kennedystewart @LisaDominato pic.twitter.com/iPH4ODfkgV

But in the days after the vandalism, nearby residents began leaving messages written on heart-shaped cards voicing their support for Musqueam Nation members.

“No racism in Marpole!” one reads.

“Respect this sacred site,” says another.

One woman saw Vancouver Park Board staff leave their own messages on green-coloured cards.

“Vancouver park rangers stand with Musqueam,” one of their cards reads.

I just saw two parks dept trucks parked nearby and when I went to check it out, the rangers had left and I found this:

Grant shared photos of the messages, calling them “beautiful.” He added if anyone who wishes to add their support is welcome to post their own message.

Beautiful messages by some ppl of Marpole in response to the racist vandalism at the ancient @musqueam village site of cesnam. They are inviting anyone, that wishes to add their support, to visit and provide a message to the Musqueam ppl. #vanpoli #bcpoli #firstnations pic.twitter.com/zmNqb5fZxf