An acurate introduction to the Lemon Bucket Orkastra (LBO) would be thoughts like “what’s that noise” or “who is having a party?” Nonetheless, one wants to see the source of the ruckus, and what is discovered upon turning a corner or peering over a ledge is nothing short of musical madness. Chris Weatherstone of LBO says the short answer to who they are is “drunk at a party.”

Formed in 2010, the 12-piece can be described as a super band of sorts, with influences of gypsy, party and punk. It as if each member brings an ingredient that is thrown into a blender, turned on high and shot straight into the veins.

“Ukraine, Serbia, Romania, Macedonia, Slovakia, Bulgaria, Hungary: these are all nations with a huge amount of traditional music, some of it hundreds or thousands of years old- these are tried and tested party jams! Not to mention the Jewish cultures from the region, which have produced the incredibly rich world of Klezmer music,” explains Weatherstone. “What we do is we take this music and infuse it with our energy and instincts, which come from punk, rock n’ roll, jazz, funk, hip hop, everything that us westerners listen to growing up. So it is folk music- we’re retelling an old story for a new generation.” 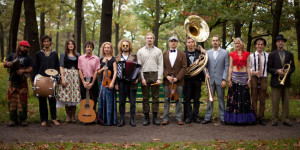 Nicolle: Why is this something that you want to spend your time doing?

Chris: Because the music is fantastic, the people are honest and passionate, and the experiences we get to have together are life-changing. We have all dreamed since we were young of being musicians and touring the world; this group manifests that dream in a wilder and more beautiful way than we could have imagined.

They are lead by three violins- which carry the melody, sometimes with help from a Clarinet or a Sopilka, which is a type of Ukrainian flute. Then visually, their dancer dominates the show in a live setting, and sing as well. The other instruments belong to the rhythm section in various ways- in many regards, Chris says the band is a rhythm machine first and foremost- but in every show, each of these instruments gets a chance to show its unique voice once or twice as a lead.

“This means that our music is always changing- what you see onstage is constantly shifting focus. Our rhythm section consists of Bass Drum, Darbouka, Sousaphone, 3 Trombones, Trumpet, Saxophone, Guitar, and Accordion.”

Their ultimate goal is very simple: to bring their music to as many people as possible so that they can experience the joy and the feeling of freedom that comes along with it.

“We want to inspire feelings of unity and love, and for people to have fun. We want to be a relief from the mundane aspects of life, and bring out the best in whoever comes to our shows- everyone should walk away with a big grin on their face and a feeling of having broken free of life’s concerns,” says Weatherstone.

Four of the group’s members recently hopped on a plane to Ukraine to spend two months touring there and supporting the Ukrainian people. Weatherstone says that it’s that kind of spontaneity and sense of adventure is exactly what makes them who they are.

By feeding from the energy of the crowd, they are able to release electricity into the sky that can make the heaviest of feet move to their rhythm. Regardless of worries or cares, when life hands you lemons, just dance.

The LBO recently played in the Vancouver Folk Music Festival on July 19 and 20.