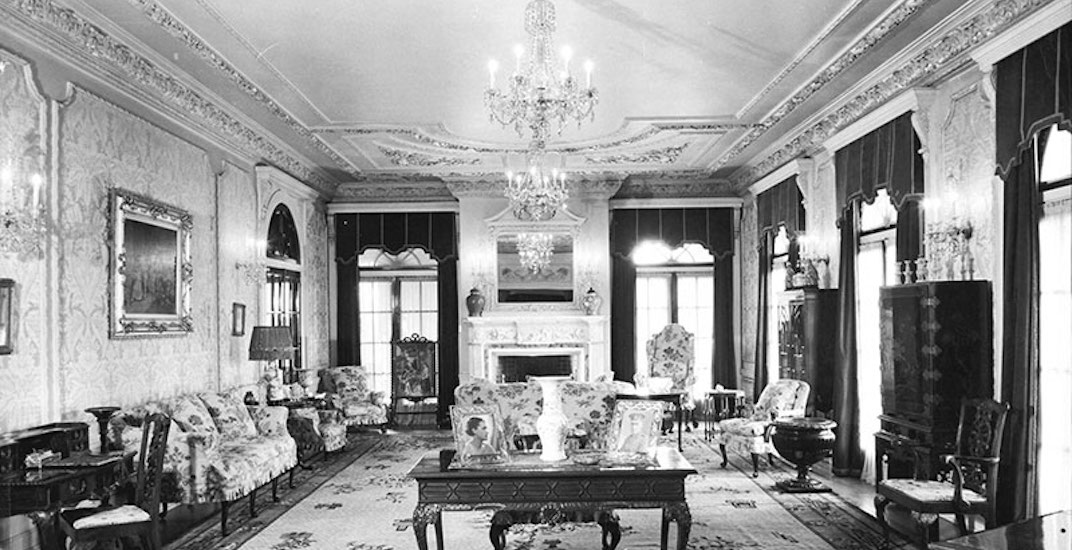 The death of Scottish nursemaid Janet Smith in a Shaughnessy mansion in 1924 is Vancouver’s most notorious cold case — a tale of unsolved murder, high society, racism, drug-fuelled parties, torture, and even an alleged haunting.

Read on to discover the tale of Janet’s tragic demise and its lurid aftermath. (And for more of Vancouver’s haunted history, check out Forbidden Vancouver’s Lost Souls of Gastown walking tour this Halloween season!). 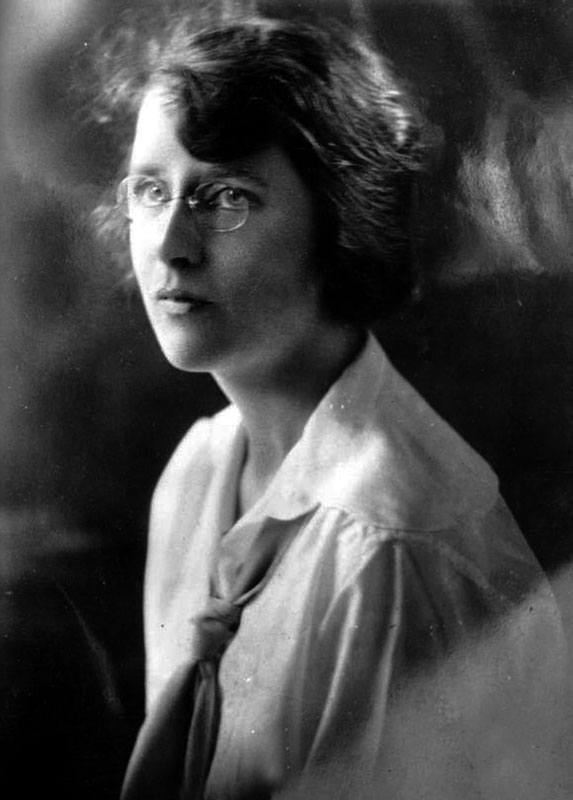 According to her tombstone, Janet Smith was 22 years, one month, and one day old when she met her demise on July 26, 1924.

She was a Scottish nursemaid working for the family of Frederick Lefevre Baker at 3851 Osler Avenue, now known as Osler Street. The other servant in the house was a young Chinese man named Wong Foon Sing.

Wong was peeling potatoes when he heard what he thought was a car backfiring. He looked out the window and saw nothing, so he went down to the basement and found Janet Smith lying lifeless on the floor with blood streaming from a bullet wound over her right eye. A handgun lay next to her body.

Wong phoned Fred Baker, his boss, to report the grisly discovery. Baker came home, confirmed that Smith was dead, and called the Point Grey Police Department (Point Grey was not part of Vancouver until 1929). 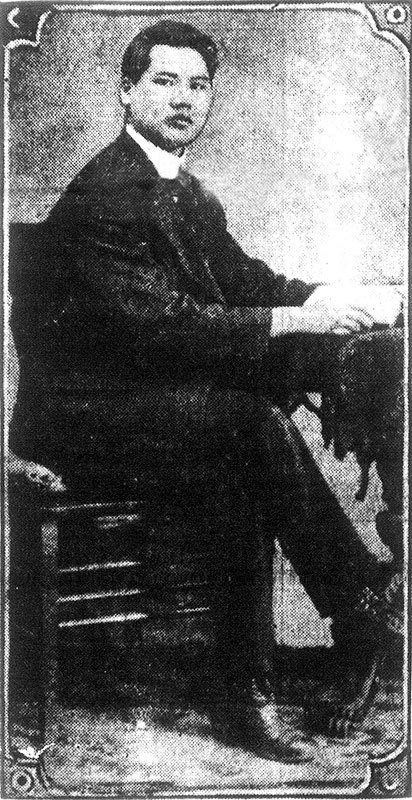 The police, Baker, and the coroner all thought that Janet Smith had shot herself, either by accident or suicide. The gun belonged to Richard Baker, the owner of the house who was vacationing with his wife Blanche in Europe at the time.

While Richard and Blanche were out of town, his brother Fred and his wife stayed in 3851 Osler, a modest abode by Shaughnessy standards, especially compared to Blanche’s former home, Hycroft Mansion, built by her father, General AD McRae.

According to Montecristo Magazine’s Jessica Hardy, Janet Smith haunts Hycroft to this day. 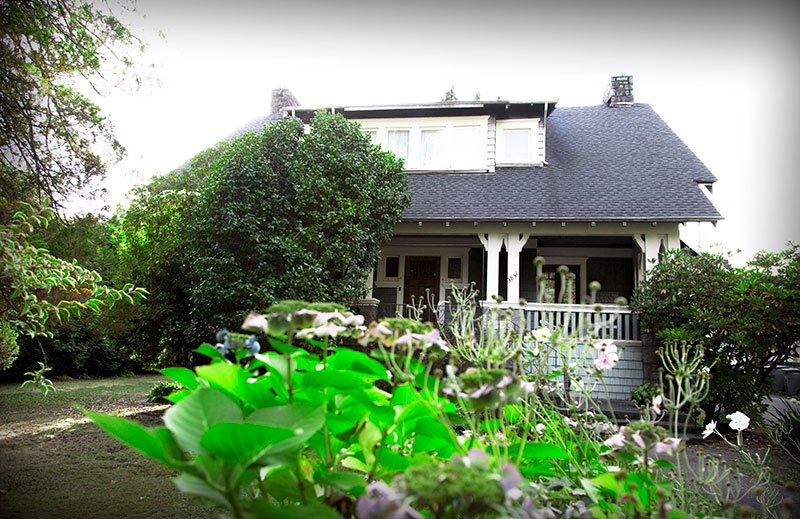 3851 Osler Street in Shaughnessy Heights, the scene of the crime.

Gunshot or blow to the head?

The first sign that the case was being mishandled was that Smith’s body was embalmed before an autopsy could be performed.

Dr. Hunter had been assigned to conduct the autopsy at the city morgue, and did what he could even though much of the physical evidence had been destroyed by the embalming process.

The doctor found that there was no gunshot residue or burn marks around the bullet wound, which suggested the gun was fired from some distance. He also found that Smith’s scalp had been partially separated from her skull and her cranium cracked, which would have made more sense if she died from a blow to the head than from a bullet.

Despite these peculiarities, Hunter did not conclude foul play; determining the cause of death was up to the coroner’s inquest. 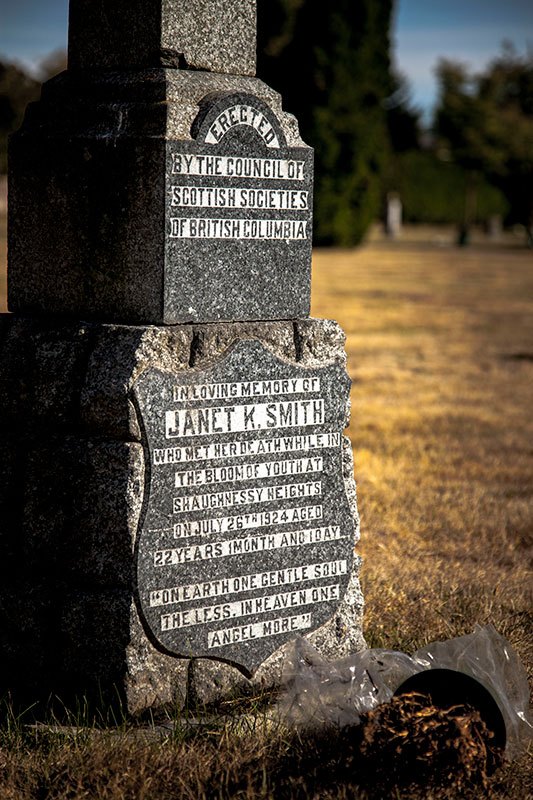 Even with the misgivings expressed by Dr. Hunter at the inquest, the jury concluded that Janet Smith’s death was accidental. The blow to the head was explained away with the theory that Smith’s head struck the laundry tub as she fell to the ground. Janet Smith’s remains were buried in Mountain View Cemetery.

Cissie Jones and Jean Haddowe were two other Shaughnessy nursemaids. They would often meet up with Smith at Angus Park and sometimes push their prams down to Cunningham’s Drug Store on Granville for a refreshment.

Neither believed Smith would ever kill herself and claimed that she had been uncomfortable around Wong Foon Sing, who was likely a little smitten by the nursemaid.

Cissie Jones took her concerns to Reverend Duncan McDougall, a xenophobic and fanatical preacher who railed against elites, Catholics, Jews, and in support of the Ku Klux Klan at his Highland Church on 11th Avenue. 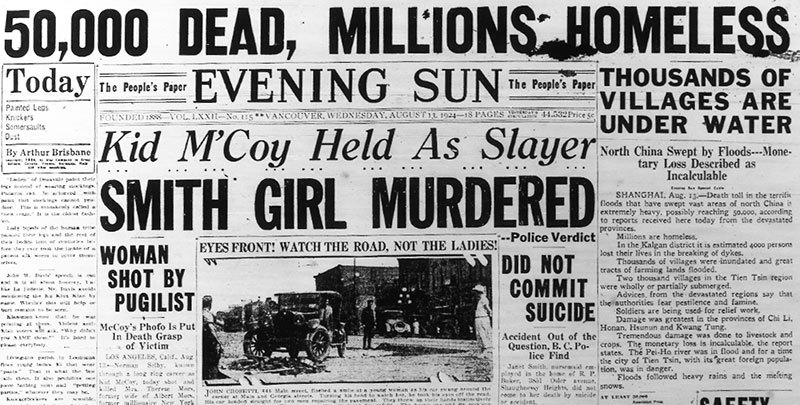 The Vancouver Star splashed story after story on the Janet Smith case on its front pages, reporting every morsel of rumour, hearsay, and speculation as if it were a major breakthrough in the case.

Meanwhile, Reverend McDougall convinced the local Scottish societies that one of their own had been savagely murdered with impunity. The United Council of Scottish Societies demanded that the BC Provincial Police step in and re-open the investigation. 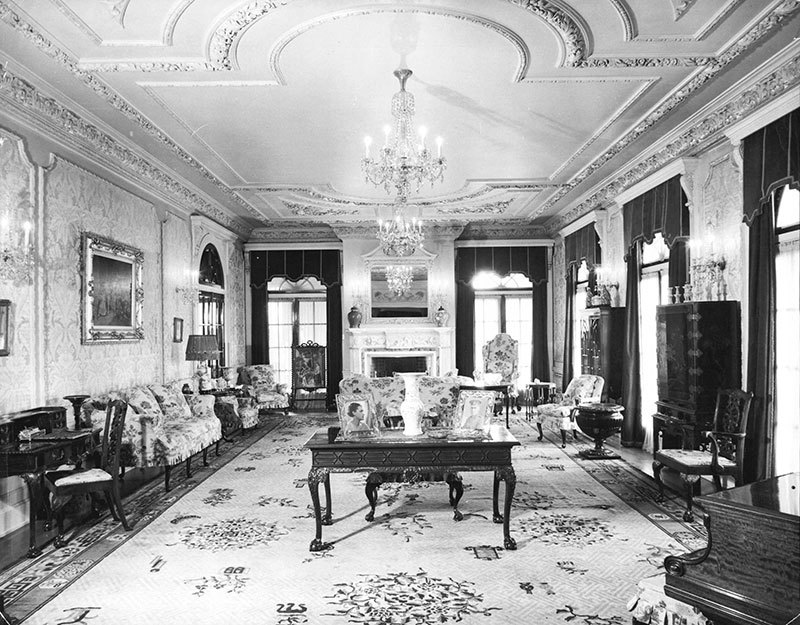 In response, Attorney General Alex Manson recruited Inspector Forbes Cruikshank to act on the Janet Smith case. Cruikshank was another Scot and head of the Vancouver division of the BC Provincial Police. He in turn contracted private detective Oscar Robinson to get information from Wong Foon Sing. 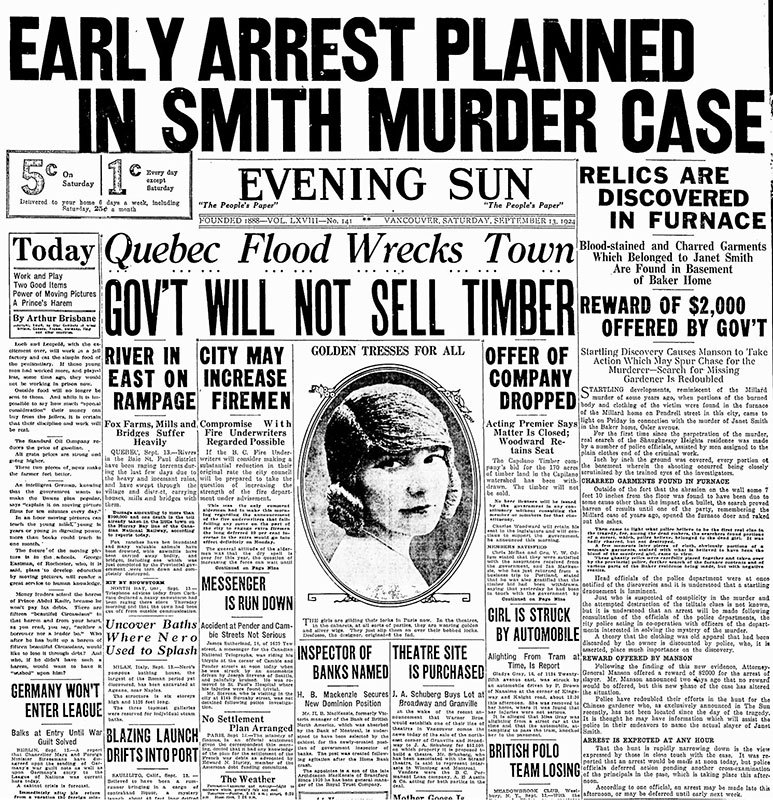 The Janet Smith murder mystery sold a lot of newspapers in the 1920s. Vancouver Sun, 13 September 1924.

Robinson tailed Wong to learn his routines, including when he went to Chinatown. On the evening of August 12, Wong stepped off the streetcar at Cordova and Carrall, where he met two friends.

As they were talking, a big black car pulled up. Two white men got out, and forced Wong into the back of the car.

Wong Foon Sing was sure that he had been grabbed by vigilantes intent on killing him in retaliation for the death of Janet Smith. He was relieved when they took him to Oscar Robinson’s Canadian Detective Bureau on West Hastings, where Oscar Robinson and others gave him the third degree.

Wong explained that he had told the police and the inquest everything he knew. Robinson beat him through the night, but Wong’s story didn’t change and they released him.

Meanwhile, Attorney General Manson agreed to have Janet Smith’s body exhumed and re-examined for a second inquest into her death.

The second inquest was more exhaustive than the first, and the jury this time concluded that Janet Smith was indeed murdered. But the evidence, as much as it provided morbid entertainment for newspaper readers and the crowds that turned out, did not point to a killer. Still, the Scottish societies were thrilled that the investigation was once again active.

Months went by as the rumour mills and yellow journals churned out conspiracy theories, but there was no real break in the case.

Eventually, attention turned back to Wong Foon Sing. On March 20, 1925, the Bakers reported Wong missing. As it turned out, he was abducted again. This time his captors wore the white pointy-hooded robes of the Ku Klux Klan. 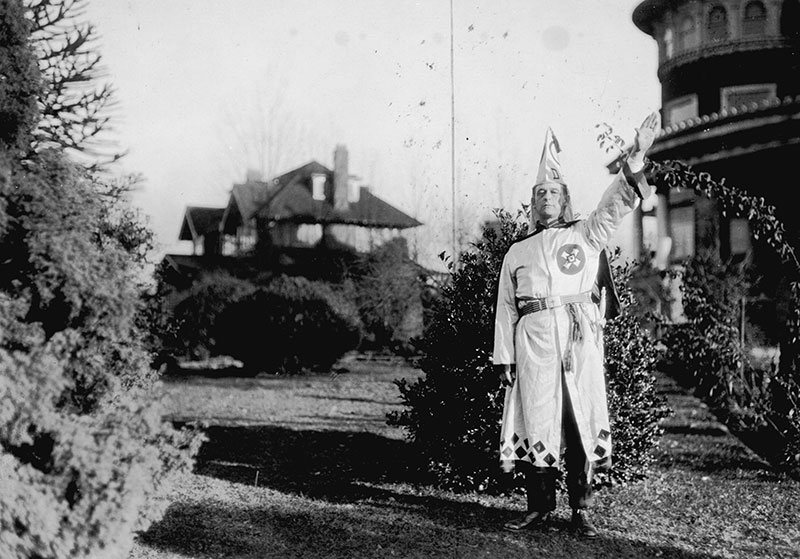 American Klansman had come to Vancouver looking to establish a chapter here. For $150 a month, they rented Glen Brae, the Shaughnessy mansion that now houses Canuck Place Children’s Hospice, as their Imperial Palace.

The Klan was not welcomed in BC. Immigration officials in White Rock tried to block their leader from entering Canada on the grounds that he was an “undesirable.” When he appealed and got a 30-day visa, Premier John Oliver refused to let him respond to allegations against his organization in the legislature.

City Council passed a bylaw prohibiting masking up in public, and the refined denizens of Shaughnessy took steps to have the Klan booted from Glen Brae. At a meeting at Hotel Vancouver, Klan speakers were jeered, not for their racism, but because they were vulgar American vigilantes. 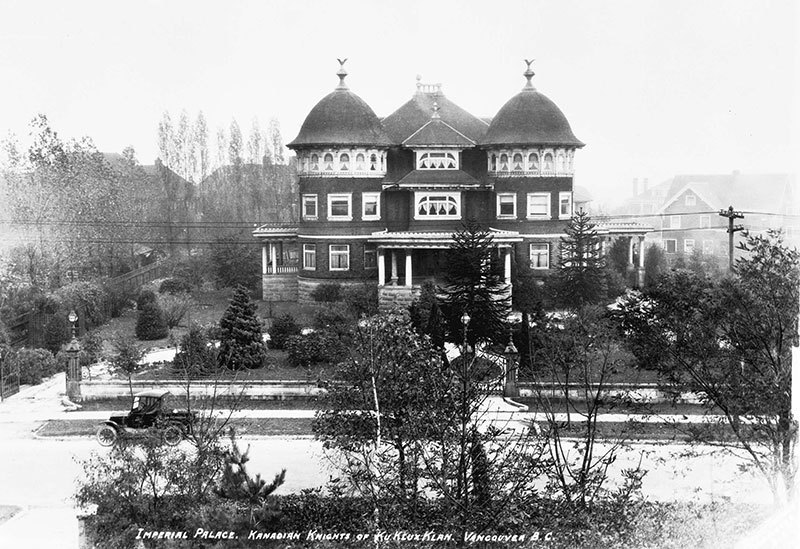 Imperial Palace of the Kanadian Knights of the Ku Klux Klan, aka Glen Brae Manor at 1690 Matthews Avenue in 1925. Photo by Stuart Thomson, City of Vancouver Archives #99-1494.

Wong’s abductors may not have been actual members of the KKK, but rather adopted their garb and tactics for their terrorizing effect. This time Wong was held in a house on West 25th Avenue, where he was chained and tortured for six weeks. Wong’s story still didn’t change. 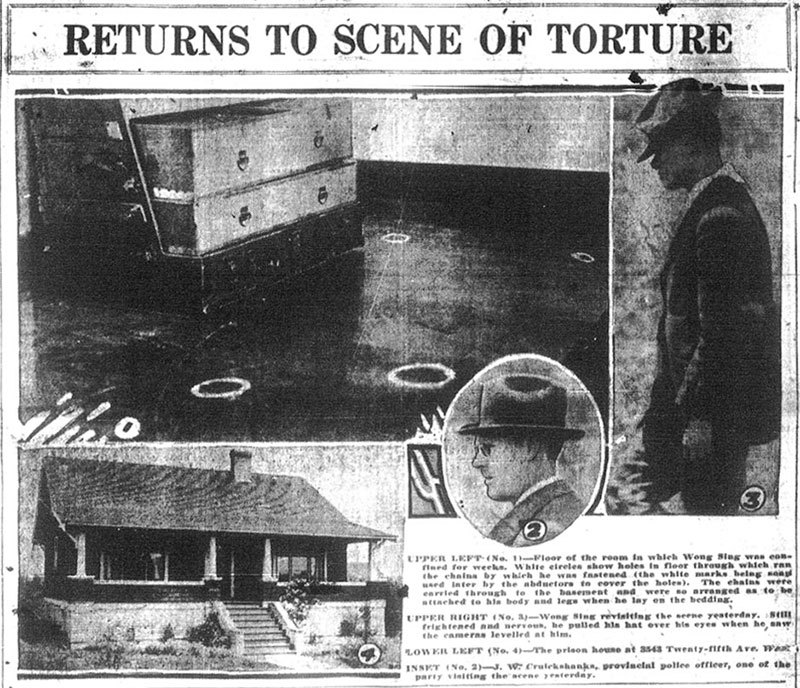 Wong Foon Sing (right) returning to the house where he was tortured. The white circles indicate holes where the chains that confined him went through to the basement. Inset is Inspector Forbes Cruikshank of the BC Provincial Police. Vancouver Sun, 19 June 1925.

Point Grey police found a battered and disoriented Wong Foon Sing wandering on Marine Drive. They took him into custody and the following morning he was told that he was being charged with the murder of Janet Smith.

Attorney General Manson signed the warrant, not because of any new compelling evidence, but because he believed the trial would be a good way to sift through the evidence to find the actual killer.

The Chinese consul and Chinese community in general were outraged at the gross perversion of justice, but that didn’t count for much in the racial climate of 1920s Vancouver.

Wong Foon Sing’s murder trial didn’t last very long because there was no evidence against him. Nor was there, in the jury’s findings, any evidence that there had been a murder at all.

Other trials followed. Fred Baker brought criminal libel charges against the tabloid Saturday Tribune twice. Suspected perpetrators of the second Wong Foon Sing abduction were some of the most sensational the city had ever seen (the first abduction was merely considered an “interview”). 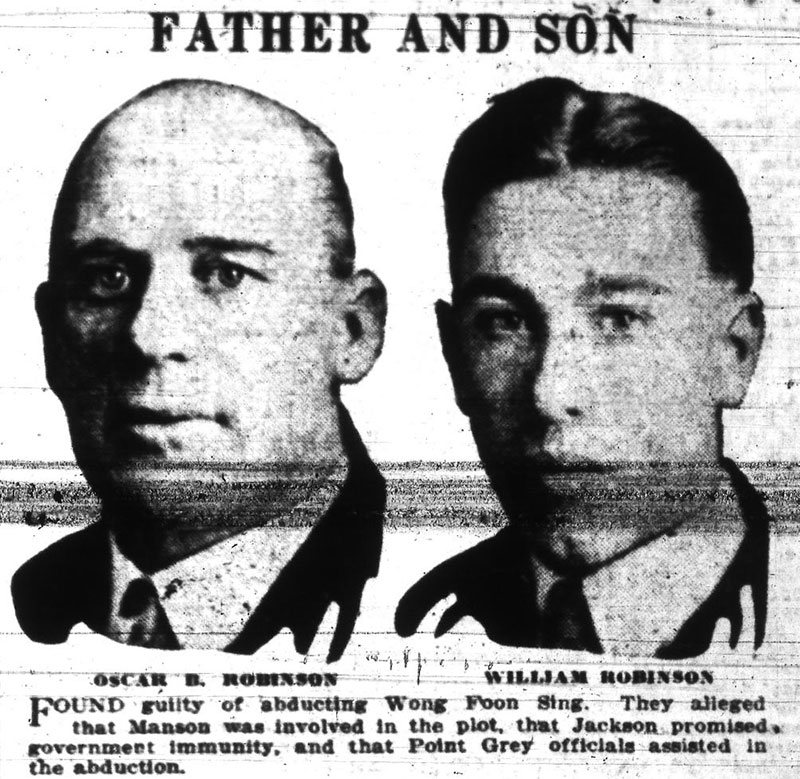 Ultimately the convolutions of powerful people overseeing the investigation made justice impossible for Janet Smith or Wong Foon Sing. The Point Grey Police Department, the provincial government (especially Attorney General Manson), and others had their reputations sullied and in the mind of the public, the Janet Smith case confirmed beyond reasonable doubt that British Columbia was corrupt to its core.

To the relief of Attorney General Manson and others, the Janet Smith case finally concluded not with any form of justice, but with Wong Foon Sing’s decision to return to China.

Unsurprisingly, he figured Canada was not a good place to be after all. Without Wong as a scapegoat, there was little motivation to continue looking for evidence of murder. 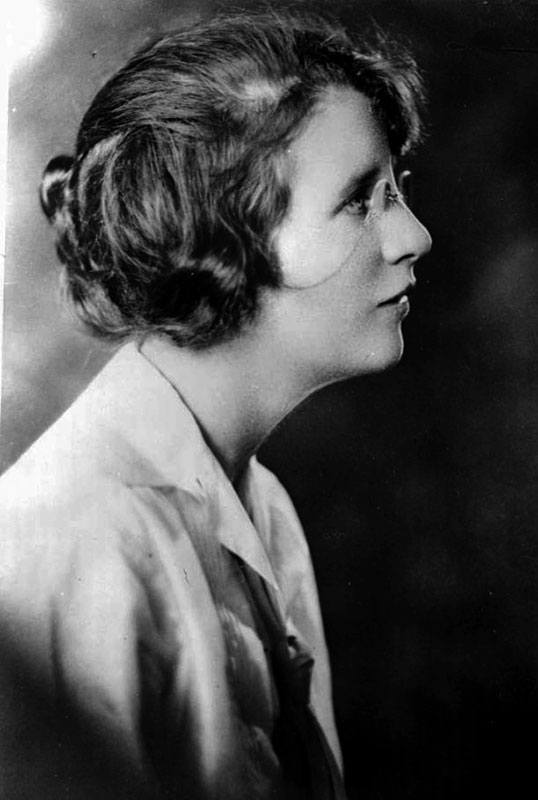 Fred Baker insisted there was no party of any kind that night at Osler Avenue. But Baker was, as Scotland Yard records attest, an international drug smuggler, and therefore probably not the most reliable source on the subject.

In his exhaustive book on the subject, Who Killed Janet Smith, author Edward Starkins describes meeting an elderly woman at Hycroft in the 1980s who recounted a story told to her in the 1930s by a nurse acquaintance.

Jack Nichol, said the nurse, claimed to have attended the party. He had been romantically involved with another one of McRae’s daughters, who caught him with Janet in the bathroom and freaked out.

During the affray, Nichol accidently knocked Janet Smith down and her head smashed on a spigot, killing her. Perhaps this is why Janet Smith chose to spend eternity at the lavish Hycroft instead of the Osler house. 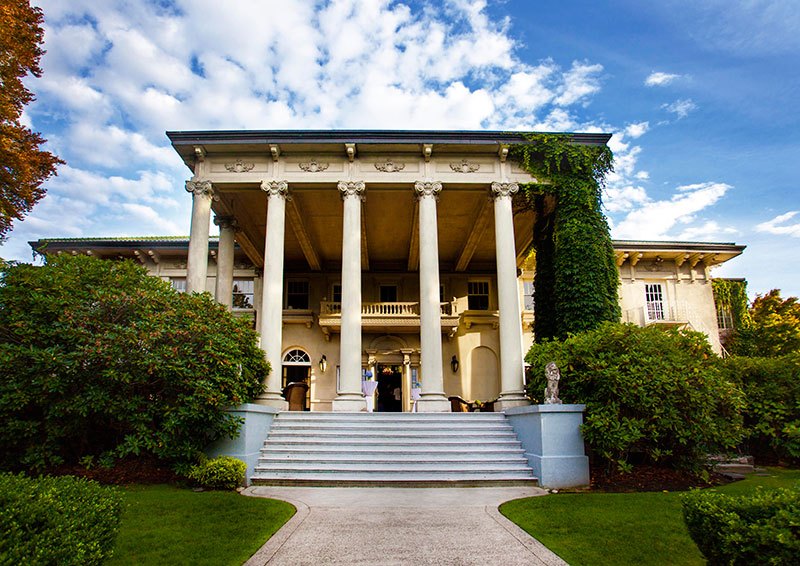 Hycroft Mansion at 1489 McRae Avenue in Shaughnessy. Today this is home to the University Women’s Club of Vancouver, but in 1924 it was the home of General AD McRae.

If you happen to find yourself in Shaughnessy Heights and notice a ghostly figure roaming the lush, tree-lined boulevards, let’s just hope it’s only Janet Smith and not the return of the KKK.