Unfortunately, recent happenings like the four Jewish teens being assaulted in Toronto, two men being assaulted and harassed onboard a SkyTrain in Vancouver, and Muslim election signs being defaced in Montreal can’t just be dismissed as isolated incidents.

They’re part of a growing trend of hate crimes being reported across the country.

According to Statistics Canada, police-reported hate crimes in Canada reached an all-time high in 2017, rising “sharply” by 47% from 2016.

This was largely driven by incidents targeting Muslim, Jewish and Black people, according to the federal agency.

While hateful incidents have been steadily climbing since 2014, police reported 2,073 hate crimes across the country, which is 664 more than the previous year. 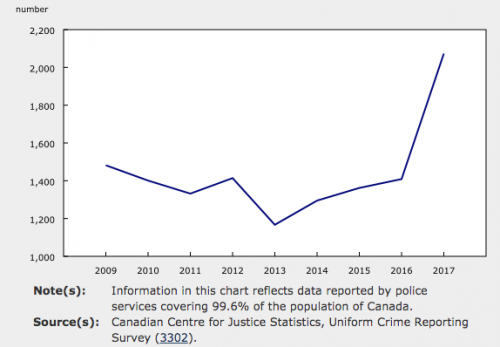 Statistics Canada also said the increases were largely driven by incidents in Ontario and Quebec.

One of the worst incidents to occur in the country included the mass shooting at the Islamic Cultural Centre of Quebec, which accounted for 26% of Quebec’s annual reported incidents targeting Muslims in 2017.

The federal agency said Alberta and British Columbia also reported increases in the number of incidents.

Furthermore, Statistics Canada says the overall increase in numbers may be related to more people reporting hateful incidents, however, the agency also said that a large number of incidents are not being reported.

Despite the large increase, Canadian hate crimes in 2017 only represented a small portion of overall crime in the country at 0.1% compared to the more than 1.9 million non-traffic crimes reported by police last year.