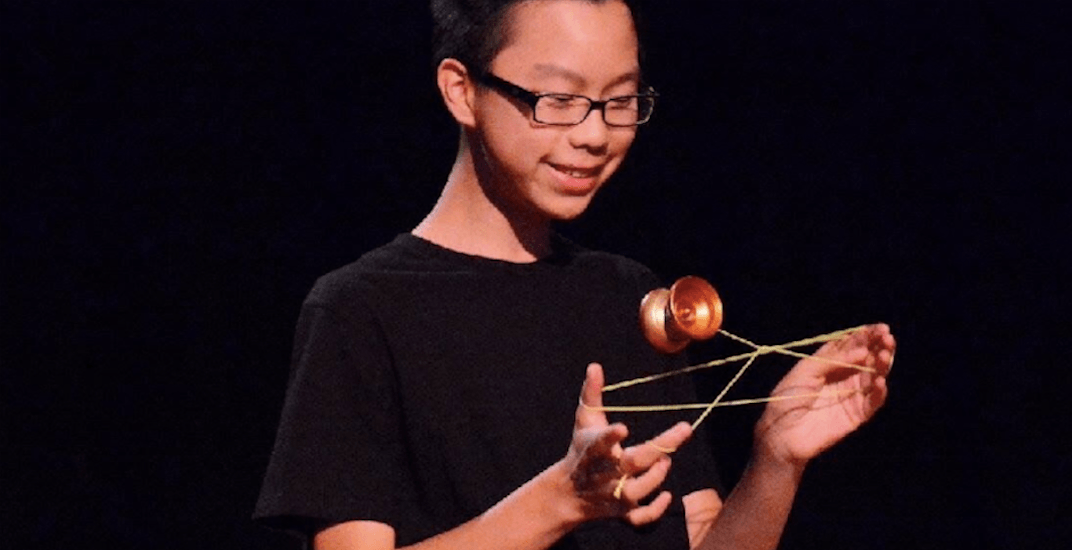 For 18-year-old Harrison Lee, yo-yoing is much more than just a casual pastime.

Lee began yo-yoing in January of 2011, attended his first competition (the Western Canadian Regionals) that same year and has continued to make a name for himself since.

In an interview with Daily Hive, Lee said there are “countless” things he loves about yo-yoing, including the potential for “endless possibilities with tricks” and stress relief it brings him as he attends UBC.

In addition, the “tight-knit” nature of the global yo-community and the international competition scene means he has friends all over the world, Lee said.

But beyond the competitions, the global connections, and the never-ending bag of tricks to master, Lee said his favourite thing about the sport “is being able to share my art with fellow Vancouverites.”

And on Sunday, December 31, Lee will get the chance to share his passion and talent live on stage, as part of Concord’s New Year’s Eve Vancouver celebration.

“I’m excited to yo-yo during the countdown to kick-off the start off 2018,” said Lee.

As for his favourite trick, Lee said “it’d have to be the classic ‘walk the dog,'” obviously – but with a new twist by running the yo-yo along my arm and having it fly off my elbow.”

Asked if he had any New Year’s resolutions of his own, Lee responded that he sees his yo-yo performances as a blend of dance and yo-yo tricks; a blend of hip-hop and dance music choreographed to yoyo movements.

“So one of my New Year’s resolutions is to improve my hip hop dancing abilities to bring my yo-yo performances up to the next level.”

In the meantime, Lee is focused on his upcoming New Year’s Eve performance and all that goes with it.

“Being downtown where the atmosphere is going to be super energetic will be exciting and it’s going to be fun performing in front of all the people,” he said.

“I just need to make sure I don’t get into any knots.”