The world famous Harlem Globetrotters are coming to Abbotsford, and we’re giving away a four-pack of tickets to see them!

The Abbotsford Centre will feature the athletes and entertainers on Friday, February 13 at 7 p.m., during the Harlem Globetrotters 2015 “Washington Generals’ Revenge” Tour.

The Globetrotters are unrivalled in their ball handling wizardry, rim-rattling dunks, trick shots, hilarious comedy and unequaled fan interaction. After the game, Globetrotter stars will sign autographs and take photos with fans, making this a must-attend event guaranteed to entertain the whole family.

Nearly a half a century ago, The Globetrotters took a historic victory against the infamous Washington Generals, who are more determined than ever bring home the win. It has been five years since the Globetrotters and Generals have faced off, and it all goes down on Friday the thirteenth. 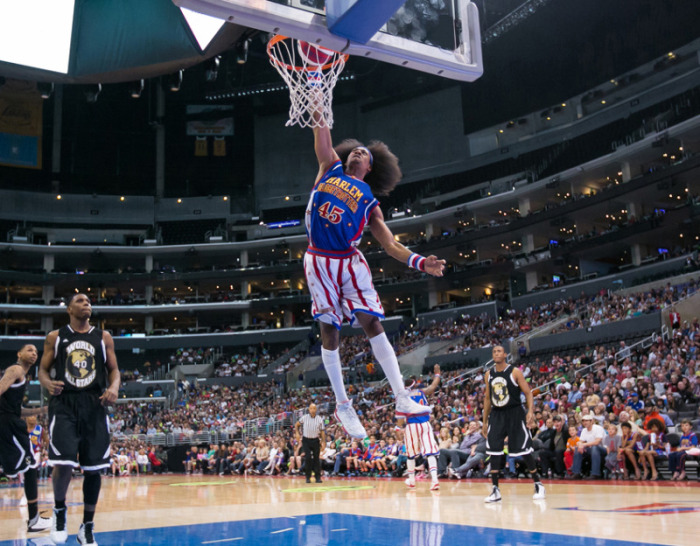 The Globetrotters are known worldwide as the Ambassadors of Goodwill™, and will honour a Harlem Globetrotters Hometown Hero at each of their 310-plus games in North America.
They will play a portion of each game with a camouflage basketball as a sign of respect to all who protect our freedom.

They are also searching for active, wounded or retired members of the military who have made their community proud with their brave service and exemplary character. Fans can nominate a Harlem Globetrotters Hometown Hero at harlemglobetrotters.com.

Tickets start at $18 and are available at ticketmaster.ca, the Abbotsford Centre box office or by phone at 1-855-985-5000. Information on group and scout tickets can also be found at abbotsfordcentre.ca.

To enter to win a four-pack of tickets to the Harlem Globetrotters at the Abbotsford Entertainment and Sports Centre on Friday, February 13, do at least one of the following:

Contest closes February 11 at 11:59 p.m. One winner will be chosen at random and contacted through the platform they enter by.