It’s the season for horror films that are full of blood and big time screams. But when you have kids you don’t really want to pay for the therapy bills afterwards.

So if you’re looking for something a tad more tame, here are six classic Halloween films that are entirely suitable for families. 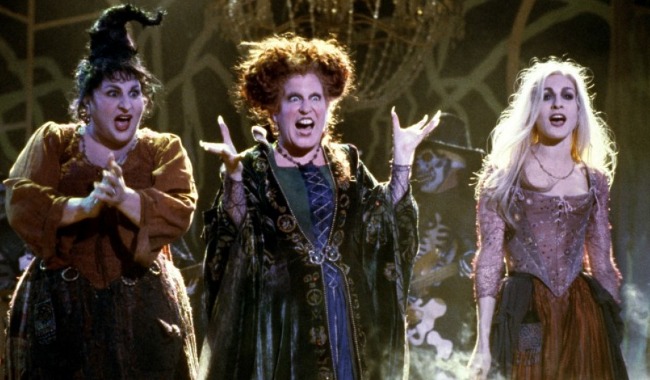 Official Synopsis: After moving to Salem, Mass., teenager Max Dennison (Omri Katz) explores an abandoned house with his sister Dani (Thora Birch) and their new friend, Allison (Vinessa Shaw). After dismissing a story Allison tells as superstitious, Max accidentally frees a coven of evil witches (Bette Midler, Sarah Jessica Parker, Kathy Najimy) who used to live in the house. Now, with the help of a magical cat, the kids must steal the witches’ book of spells to stop them from becoming immortal. (Buena Vista Pictures)

Why you should check it out: This has been included on this list because my wife likes to pull out this DVD every year, and it has become a cult favorite. For some reason this darker Disney flick was originally released in the summer of 1993 and was supposed to be a made as television special. The studio liked it so much that they changed their mind and released it to the big screen. It has been a Halloween staple ever since and can be found on cable just about every October. It’s rated PG and does have some spooky parts, but it’s mostly a comedy that will keep your kids entertained and provide some laughs for the parents too.

The Nightmare Before Christmas 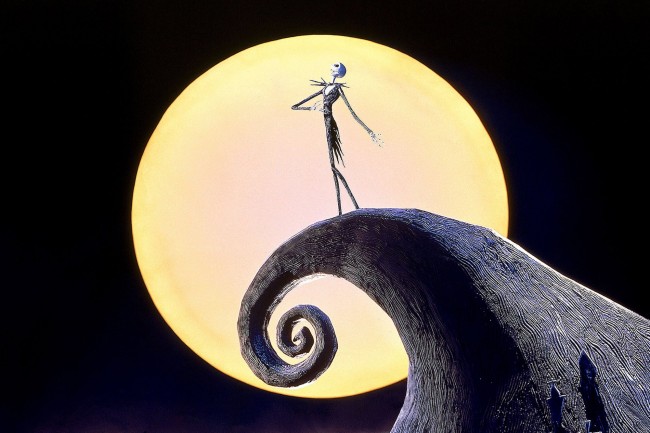 Official Synopsis: The film follows the misadventures of Jack Skellington, Halloweentown’s beloved pumpkin king, who has become bored with the same annual routine of frightening people in the “real world.” When Jack accidentally stumbles on Christmastown, all bright colors and warm spirits, he gets a new lease on life – he plots to bring Christmas under his control by kidnapping Santa Claus and taking over the role. But Jack soon discovers even the best-laid plans of mice and skeleton men can go seriously awry. (Touchstone Pictures)

Why you should check it out: Is this a Halloween or Christmas film? Who knows? But no matter when you watch it, this spooktacular flick from the dark mind of Tim Burton and Henry Selick is undoubtedly classic. This is the perfect film for families because there are no overly scary scenes. Instead, what you get is a fantastic story alongside some creative stop-motion animation and classic songs for the season. This has to be staple in your movie collection, and in some ways, Tim Burton has become the King of Halloweentown with some of his other great films that could have made this list. 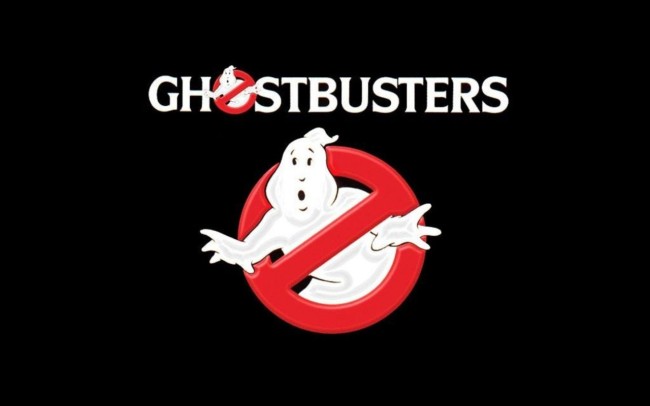 Official Synopsis: After the members of a team of scientists (Harold Ramis, Dan Aykroyd, Bill Murray) lose their cushy positions at a university in New York City, they decide to become “ghostbusters” to wage a high-tech battle with the supernatural for money. They stumble upon a gateway to another dimension, a doorway that will release evil upon the city. The Ghostbusters must now save New York from complete destruction. (Columbia Pictures)

Why you should check it out: In my book this is not only one of the greatest movies ever made, but easily the best Halloween film to watch every October. At one point this was the highest grossing comedy of all time, the film spawned a hit sequel and a 1986 Saturday morning cartoon series called The Real Ghostbusters. It has become such a cult classic that Hollywood has decided to reboot the franchise with an all-female cast, which is set to come out next summer.

If you and your kids have not seen this iconic 80s flick then do yourself a favour: turn the lights out, grab the DVD, make some popcorn, and enjoy. It does have some scary visuals that younger kids may find creepy, but overall it’s good ol’ fashion Halloween fun. 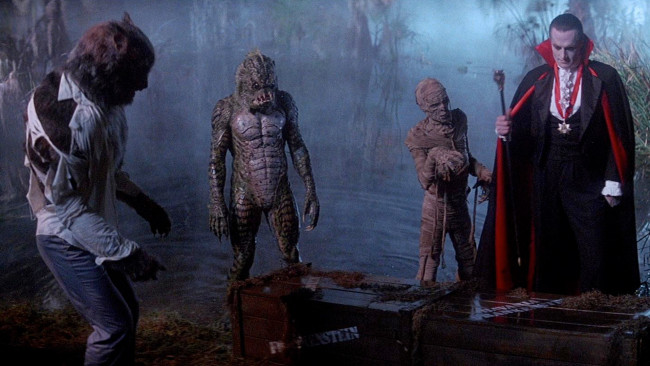 Official Synopsis: Dracula is alive. In fact, he plans to rule the world and that is why he seeks the help of other legendary monsters. However, a bunch of kids regarded by their peers as losers uncover the devious plan and prepare for a counter strike. (TriStar Pictures)

Why you should check it out: Is it just me or did the ’80s make some of the best adventure movies of all time? I remember the first time I saw this flick on VHS with some friends; we immediately started our very own Monster Squad. But don’t let that put you off of this family-friendly Halloween classic made famous for Duncan Regehr’s performance as Dracula, one the absolute best interpretations of the character to grace the big screen. For the most part this film actually stands the test of time, although it does have some scary parts that might not be suitable for younger kids. 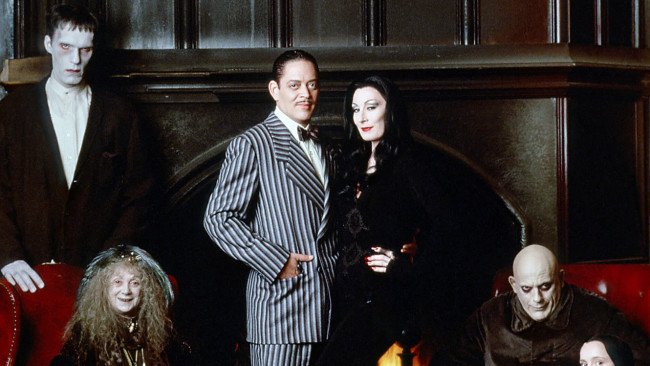 Official Synopsis: When a man (Christopher Lloyd) claiming to be Fester, the missing brother of Gomez Addams (Raul Julia), arrives at the Addams’ home, the family is thrilled. However, Morticia (Anjelica Huston) begins to suspect the man is a fraud, since he cannot recall details of Fester’s life. With the help of lawyer Tully Alford (Dan Hedaya), Fester manages to get the Addams clan evicted from their home. Gomez realizes the two men are conspiring to swindle the Addams fortune and that he must challenge Fester. (Paramount Pictures)

Why you should check it out: You can’t do Halloween without The Addams Family. The film, which is based on the 1960s television series of the same name (as well as some very old Charles Addams newspaper comics), boasts a brilliant cast with Angelica Huston fabulous as Morticia and the late Raul Julia pitch-perfect as Gomez.

The end result is an enjoyable take on the venerable family that’s every bit as creepy, kooky, mysterious, spooky, and altogether ooky as you might hope. What’s even better is that the 1993 sequel, Addams Family Values, is just as good; so it’s perfect for a double feature at home with your own creepy family. 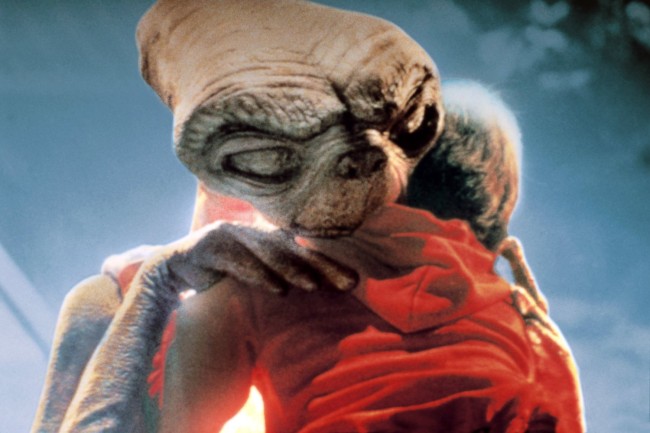 Official Synopsis: After a gentle alien becomes stranded on Earth, the being is discovered and befriended by a young boy named Elliott (Henry Thomas). Bringing the extraterrestrial into his suburban California house, Elliott introduces E.T., as the alien is dubbed, to his brother and his little sister, Gertie (Drew Barrymore), and the children decide to keep its existence a secret. Soon, however, E.T. falls ill, resulting in government intervention and a dire situation for both Elliott and the alien. (Universal Pictures)

Why you should check it out: Steven Spielberg’s classic came out in June of 1982 and was one of the most successful blockbusters of all time. Although it is perfectly acceptable to watch this movie anytime of year, a lot of people have made it a part of their Halloween movie tradition.

Originally E.T. was supposed to be darker and scarier. In fact the original script, which was about an alien who terrorizes a family in their own home; was eventually recycled into the 1982 film The Poltergeist. Thankfully Spielberg decided to change things up, and the rest, as they say, is history.

Overall this is the perfect family Halloween film and is a must see, even if you have watched it a million times before. There is nothing better than introducing your kids to this classic.

It’s the Great Pumpkin, Charlie Brown
The Witches
Casper
Beetlejuice
Monster House
The Legend of Sleepy Hollow
The Curse of the Were-Rabbit