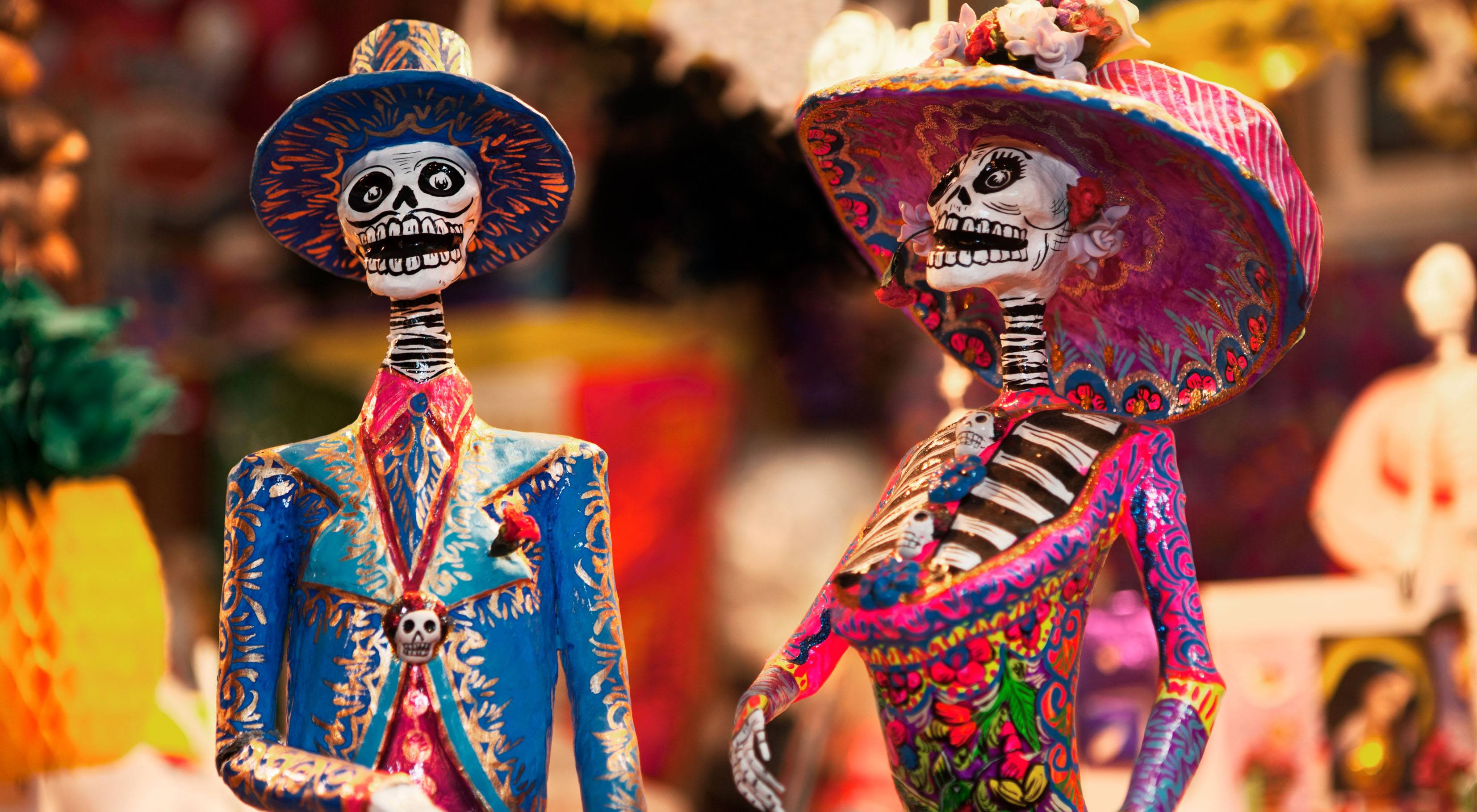 Day of the Dead figurines in the market (Mexico Tourism Board)

For North Americans, October 31 is a day to get out the costumes and go out to collect candy. But the history of celebrating ghouls and the dead actually goes back centuries in Europe and Latin America, and has more to do with remembering ancestors than getting scared by haunted houses and witches.

Mexico has been celebrating the Day of the Dead for 3,000 years and the spectacle of the festivities was brought back to life with last year’s James Bond movie Spectre, when a single tracking shot followed 007 through a Day of the Dead parade. Tourism officials in Mexico have since announced they’re holding Day of the Dead parades to capitalize on the enormous publicity generated by the movie.

Since Air Canada now flies non-stop from Vancouver, you too could be in Mexico City in just five and a half hours to remember the dead and soak up the spectacle.

Note that, parades aside, the bulk of the activity takes place over two nights. On November 1, families welcome back children who have died. On November 2, adults are remembered.

Mexico City is the largest metropolis in the western world and that’s one reason why it’s sometimes called The Monster. It’s also a monster to get around anywhere, so pick areas or zones that you can spend time to explore. The Hilton Mexico City Reforma Hotel on Reforma Avenue is a convenient location, just footsteps from the historical downtown, restaurants and shopping. 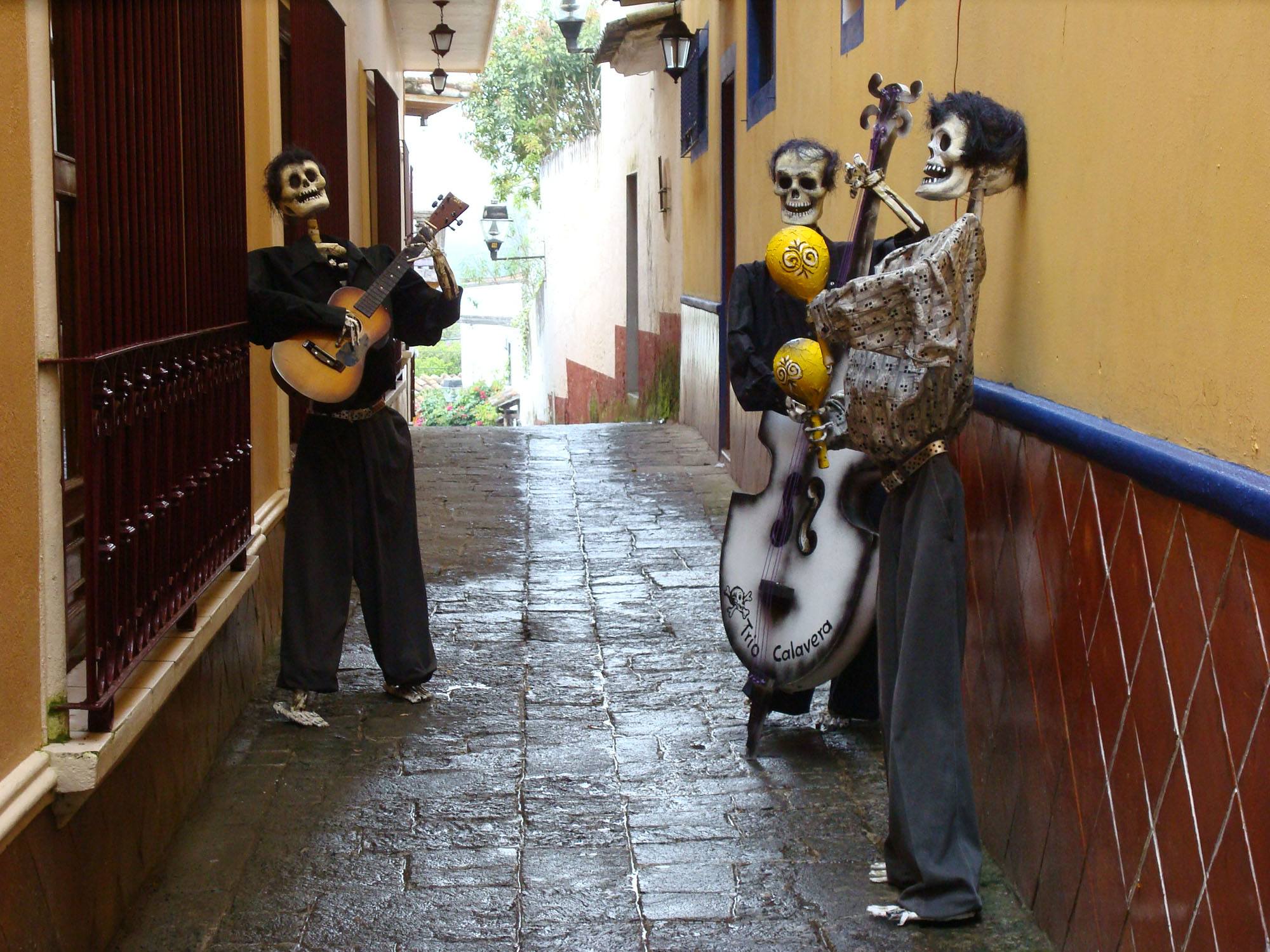 Day of the Dead musicians (Mexico Tourism Board)

This is the city’s nightlife hub and home to Mexico City’s gay community. The area has also become a great place to walk around at night in a safe and colourful environment, making it very convenient for night owls like me, who are on the hunt for the best street tacos.

9 am – Breakfast at El Cardenal

After tequilas and late night street tacos, there’s nothing better than taking the hotel elevator and just heading down to go to El Cardenal restaurant for traditional Mexican dishes. Highly recommended is the Chocolate Doña Oliva, an authentic bittersweet chocolate whipped with a molinillo stick at the table. Revueltos con Chilorio will get you ready for your day, a dish of scrambled eggs mixed with a preparation of minced pork meat in a non-spicy sauce of tomato and dried chillies. 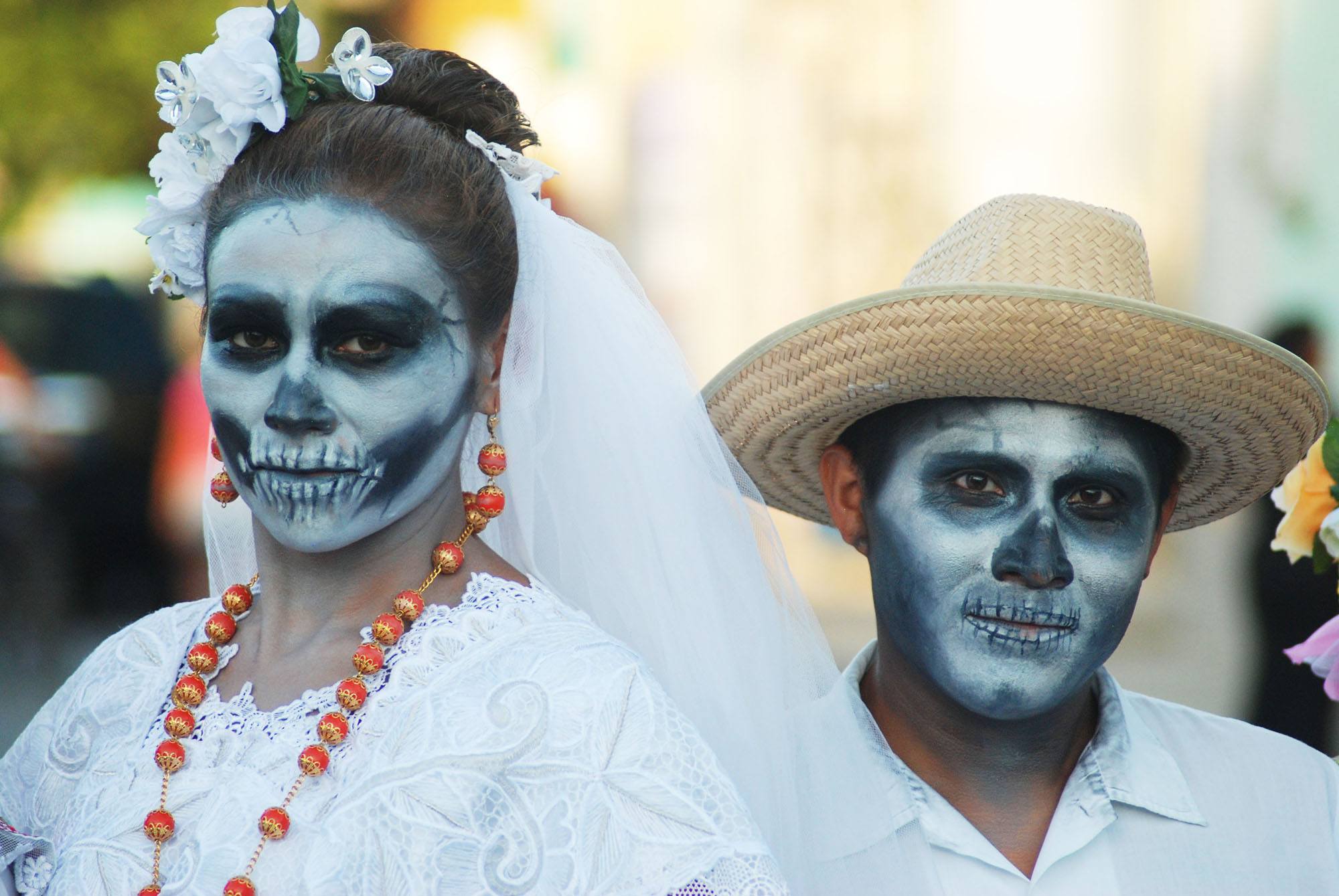 At this time of year in the Zócalo, the city’s central square, you’ll find huge arches adorned with marigolds providing a gateway to welcome La Catrina, Mexico’s Dame of Death.

Here is where you’ll find thousands of people in costumes and face paint, as well as beautiful decorated edible skull masks. Walk around the surrounding streets of Paseo La Reforma, where James Bond encountered the parade of the walking dead.

In fancy Vancouver steakhouses, the server comes by to make the Caesar salad right by your table. In Mexico, the server shows you the ingredients for your tomatillo/tomato salsa and makes the dish right in front of you using a molcajete, a Mexican version of a mortar and pestle.

I ordered the spicy and flavourful tamales de mole negro, a chicken dish with handmade tortillas for a reasonable $18 ($245 Mexican Pesos). The vibe downstairs was lively and fun, and while the upstairs level was more sedate, it still wasn’t dead quiet. 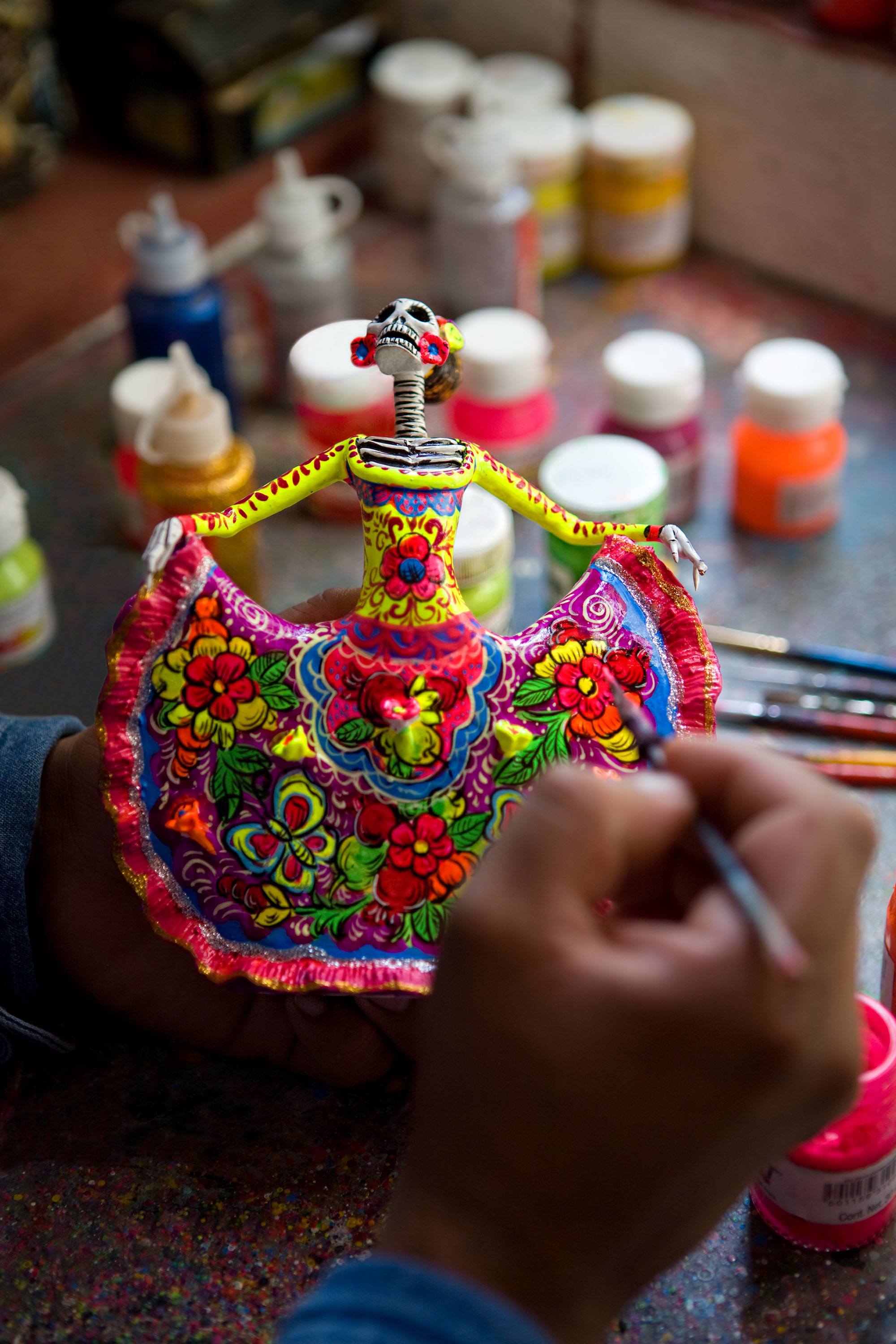 Day of the Dead crafts (Mexico Tourism Board)

This gathering space is in one of the oldest parts of Mexico City. It literally translates as a “place of coyotes” and it’s a gathering hub that resembles a small Mexican village with a square, a cathedral, a kiosk and a park. This is a good place to grab a coffee and churros at El Jarocho and walk around to enjoy the great colonial architecture and find traditional products at the bookstores and shops.

Frida Kahlo was born, lived and died in Casa Azul, the Blue House. It’s now a museum to which almost every visitor to Mexico City makes a pilgrimage, in order to gain a deeper understanding of the painter. It gets busy on weekends, but mid to late afternoon or earlier in the day is a good time to visit.

Just 15 minutes’ walk from the Frida Kahlo museum, you will find superb dishes in a nice atmosphere with a view of a park. To open my mind, I started with a drink of mezcal and before long, I had ordered the tacos de chapulines – grasshopper tacos. ($11, $160 Mexican pesos). I blamed the mezcal for choosing that Mexican culinary delicacy. I’m not sure if I can do it again, but it was delicious.

6 pm – Tour the town of Mixquic

The tiny town of San Andres Mixquic, on the outskirts of the city is a quiet place for most of the year, but it is completely transformed for Day of the Dead celebrations.

Experience the bustling market selling decorations and hot tamales – meat and maize flour steamed in corn husks – before soaking up the amazing floral displays around the graves in the San Andrés Apóstol church cemetery. 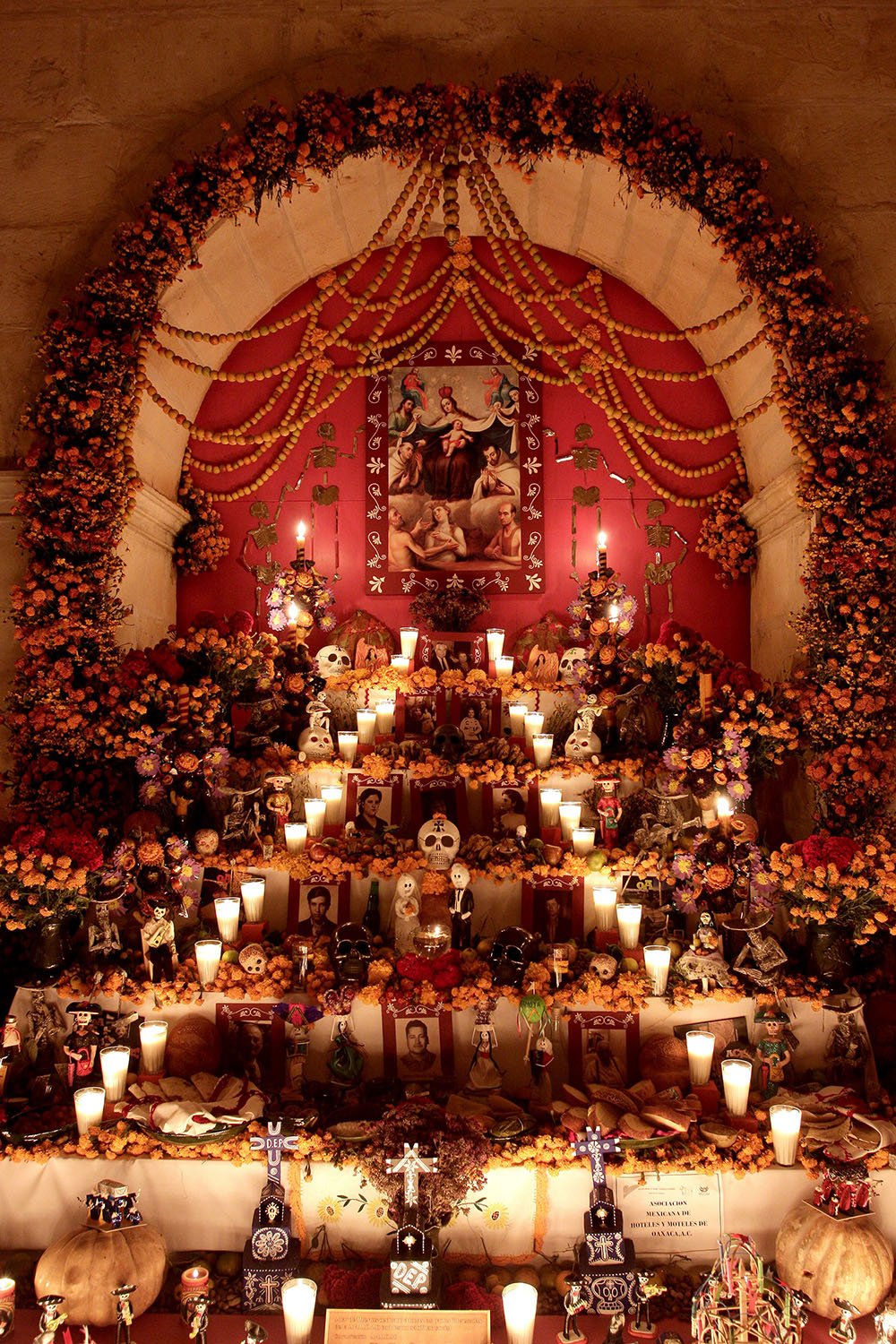 A Day of the Dead altar (Mexico Tourist Board)

The celebration includes a visit to the graves of loved ones, where people leave bread of the dead: skull-shaped bread, candied pumpkins or any favourite food of the celebrated late friend/family member. They also leave candles, incense and a picture of the dead person, to encourage the souls to visit. Toys are brought for dead children, and bottles of tequila are brought for adults. The atmosphere is not grotesque or sombre. It’s like a late-night picnic with good food and great stories to share. 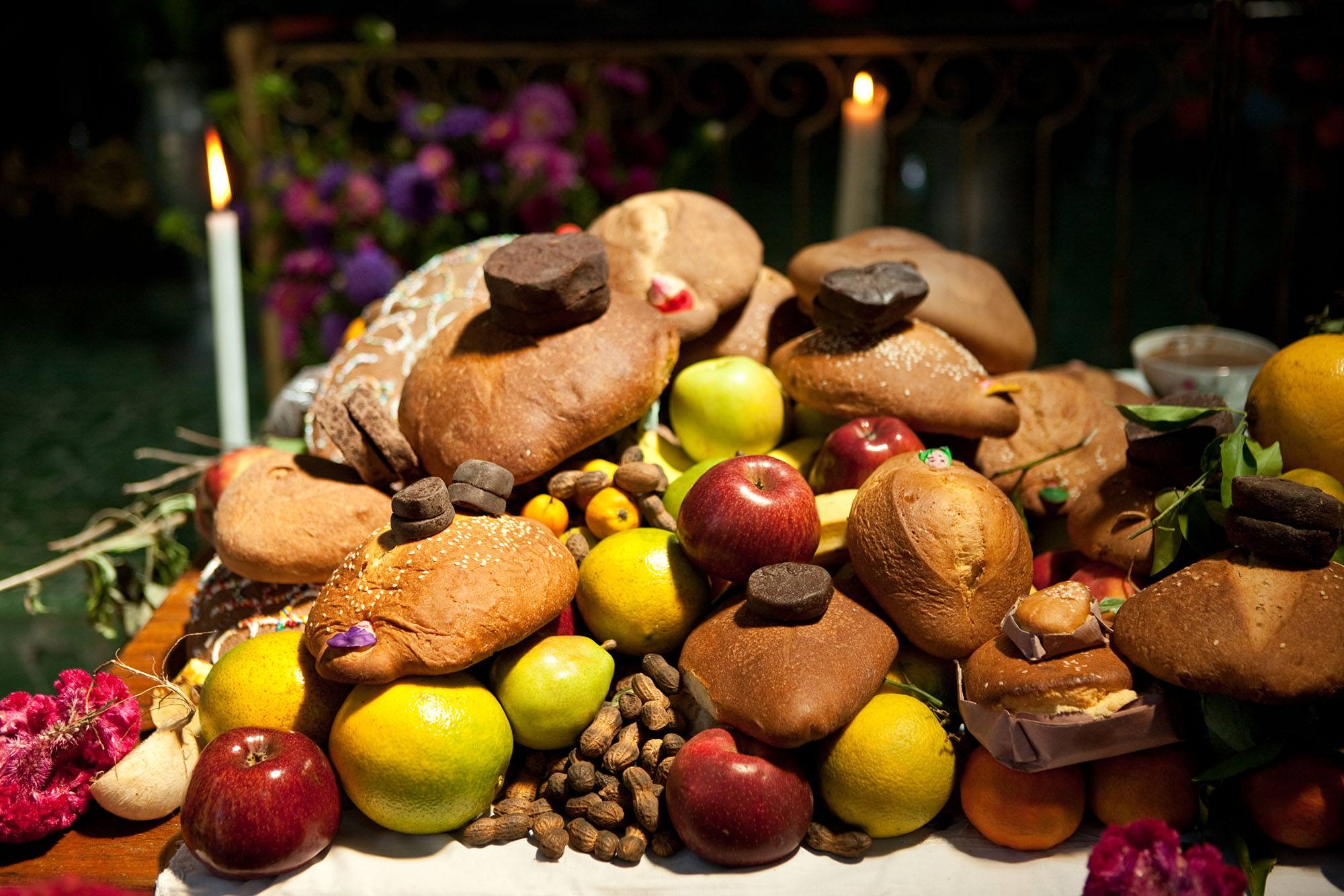 A food altar for Day of the Dead (Mexico Tourism Board)

The place where “the gods were created” is situated some 50 km northeast of Mexico City and is a UNESCO World Heritage site. Built around 2,000 years ago, Teotihuacan is characterized by two main monuments – the temple of Quetzalcoalt and the Pyramids of the Sun and the Moon. The settlement developed into one of the largest ancient cities in the Americas, with close to 25,000 habitants.

After walking around the pyramids all day, La Gruta is a great place to settle down for a leisurely lunch. This restaurant inside a cave will take your breath away when you realize how far below ground you are.

The blue corn quesadillas were good and so was the basa fish, which was served with rice and beans. Entrees are in the $22-25 range. Other famous guests before you, include Jorge Luis Borges and Queen Elizabeth II.