“That’s big.” is the first thing you think to yourself as you see the massive 122 foot turbine blade cutting into the sky from behind the hill. There’s no other way to accurately describe Grouse Mountain’s Eye of The Wind Turbine. Well, that and it would make a great office for a supervillain.

As the world’s only elevator accessible turbine outfitted with a 360 degree  viewPOD, The Eye is an example of innovation in the multibillion dollar eco-tourism industry. Most people are astounded to find out they can visit the fully functional 215 foot tower and see sustainability, business and leisure work together to offer an experience like no other. 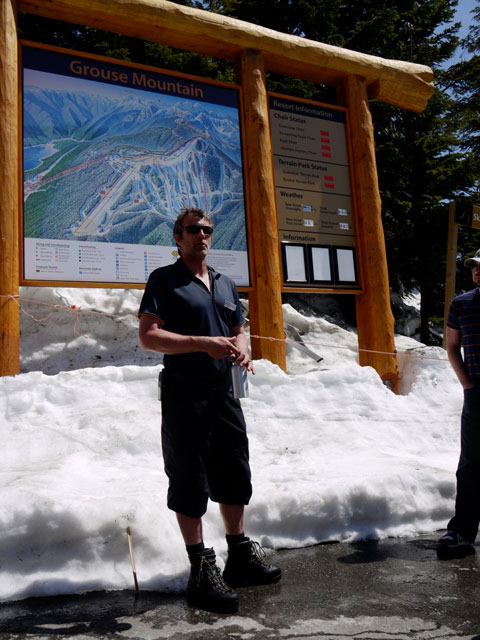 The 2 o’clock tour group assembled loosely next to a map of  ski runs as tour guide, Alex introduced himself gave a brief overview of the 90 minute tour. Chris and Aaron, 2 visitors from Toronto, were recovering from a post Canucks game hangover and the clear mountain air must have been having the desired effect  as they provided some good natured ribbing about the speed of life in Vancouver and how everyone here seems to either work in a coffeeshop or from home.

After a slight delay to find out what was happening with some latecomers we began our walk to the chairlift that would take us to Grouse’s peak. 10 foot snowdrifts on either side of the muddy walk defied the surprisingly warm air and reminded us of just how imposing nature can be. A young man with a bald eagle perched casually on his heavily gloved arm posed for ecstatic Japanese tourists holding wafer thin silver cameras. This was getting surreal. 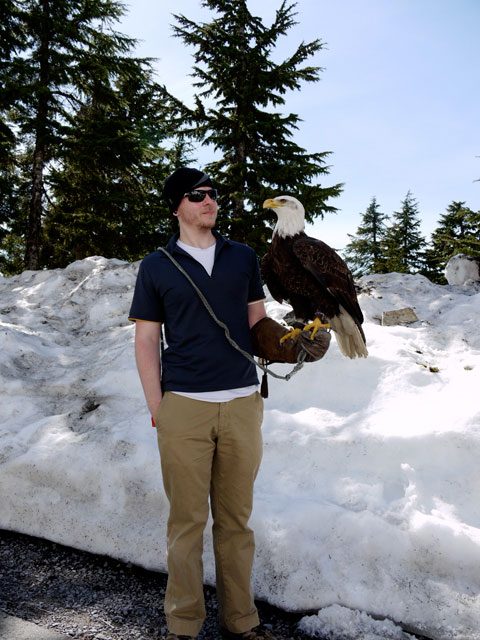 Zipline riders hooted as they sped by overhead, pelted by  snowballs thrown by a gang of shrieking 9th grade girls. The height of amusement to be sure. Arriving at the chairlift we noticed about half our group was missing, undoubtedly distracted by the scent of grizzlies, Grinder and Coola, fresh from their four month nap. Opting to press upward, we boarded the chairlift with Kim, the second guide as Alex tracked back to find the errant tourists. 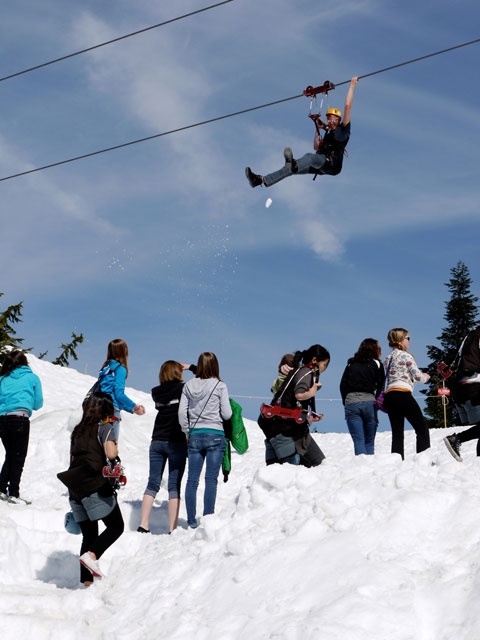 The 13 minute ride up to the peak was spent mostly in silence, commenting occasionally about how nice of a day it was and we were missing only a cold beer at that exact moment. Kim, who recently started at Grouse and was completing her training filled us in on the various facts about the Eye and some of the mystery surrounding it. Built at an undisclosed cost, The Eye, while capable of generating enough electricity to power over 400 homes for a year, is intended to be used primarily as a demonstration of how renewable energy is produced and the application of wind power to supplant existing electricity generation methods. 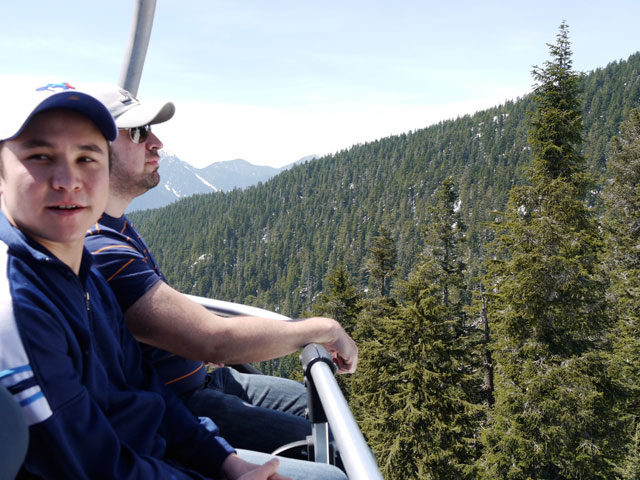 We arrived at the peak and the sun beat down ferociously. The snow at our feet crunched wetly as the rest of our group landed 4 at a time. Kim and Alex led us partway down the hill to pause for photos of the view and the Eye as it stood, a white metal finger against the cloudless sky. Even from our vantage point a good hundred meters away the turbine’s giant blades looked close enough to touch. This was an illusion of course, the 20 story tower looming ever larger as we approached, until finally, we made it to the monolithic base. The Pod above us a glittering scarab. 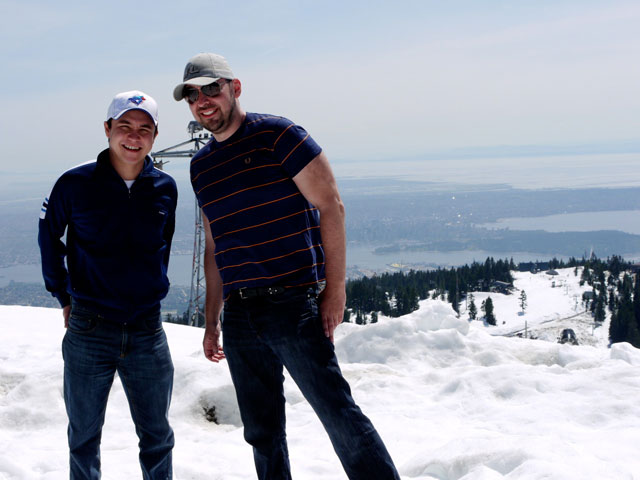 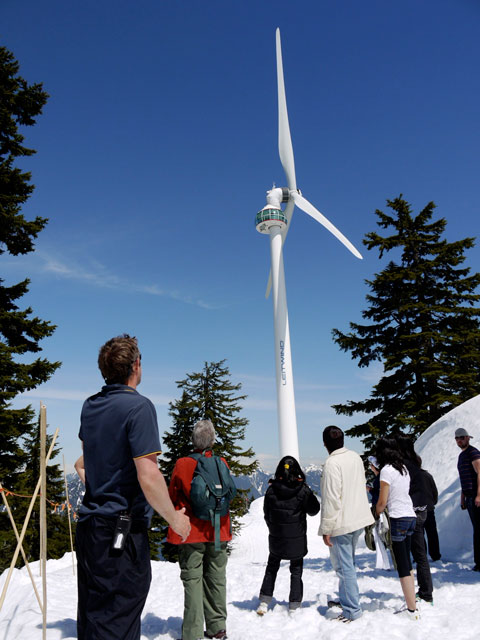 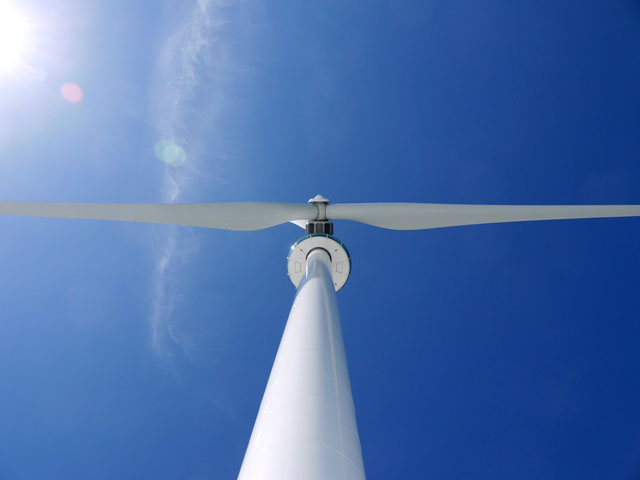 One of our group, a lady visiting from Britain, warmed her feet on the concrete pad. She had forgotten to bring appropriate footwear and complained with some wonderment at how cold the snow really was. We filed four at a time into the tiny elevator that would take us into the Eye of the Wind. The visual splendor at our destination knocked the words right out of our mouths. Even the high powered business executive who spent the whole time arguing with someone on his phone was dumbstruck.

Because it was a windless day, the Eye’s blades weren’t moving but it was explained to us by the guides that when conditions are appropriate, the turbine would turn into the wind and begin generating power. When at full speed, the entire structure itself could sway up to six inches. Inside the tempered glass bubble, we didn’t find it difficult to imagine what that was like with the reinforced fiberglass blades just half a meter from our faces. Up close, they were even more impressive . For something so large to be able to move so quickly, relatively speaking, it was humbling to say the least. 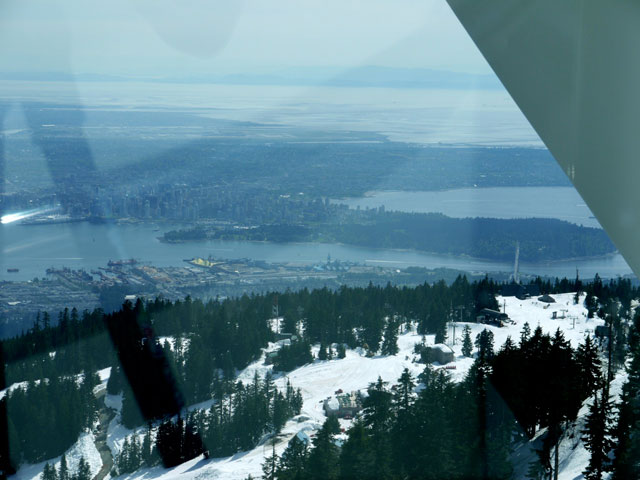 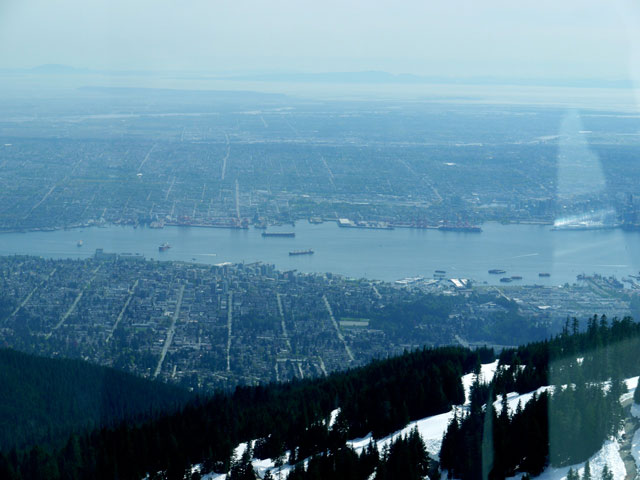 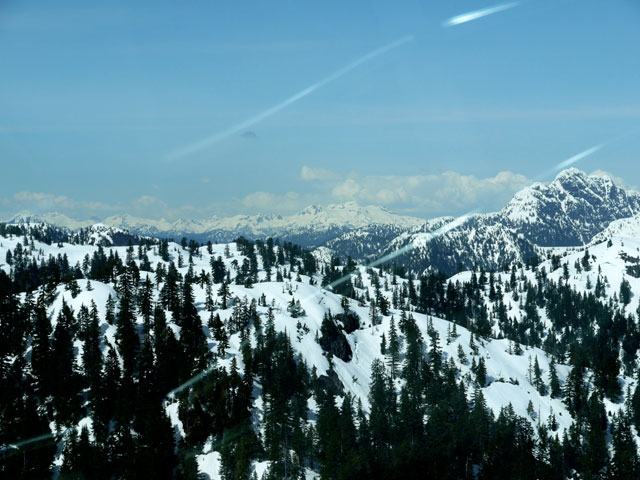 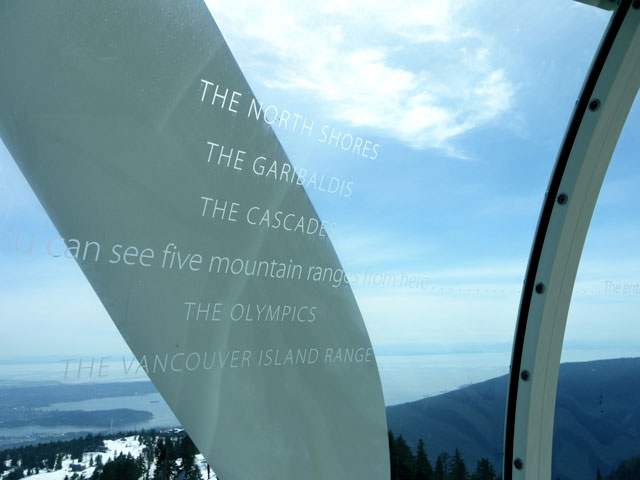 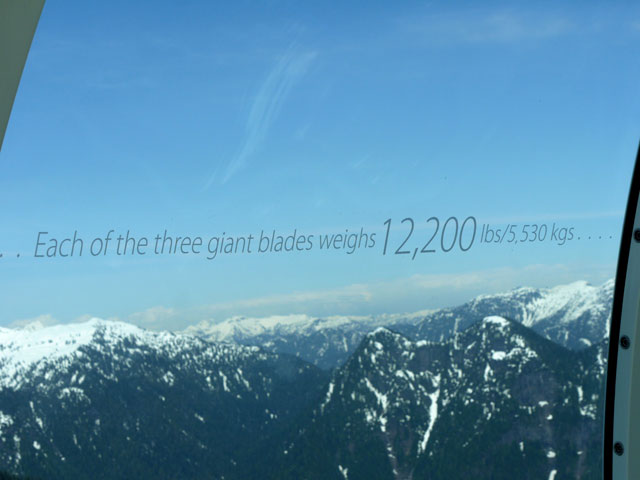 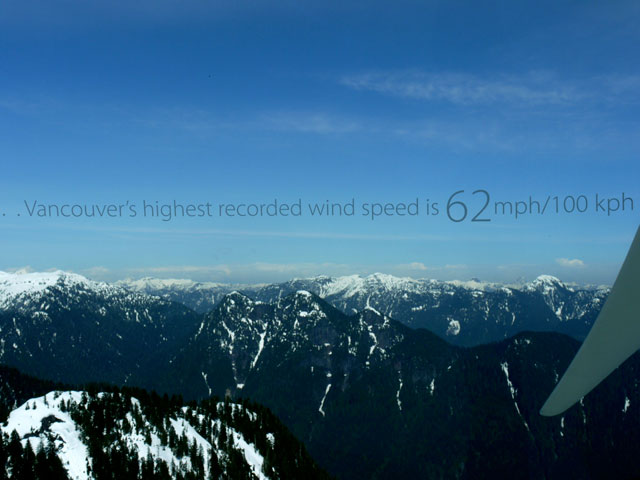 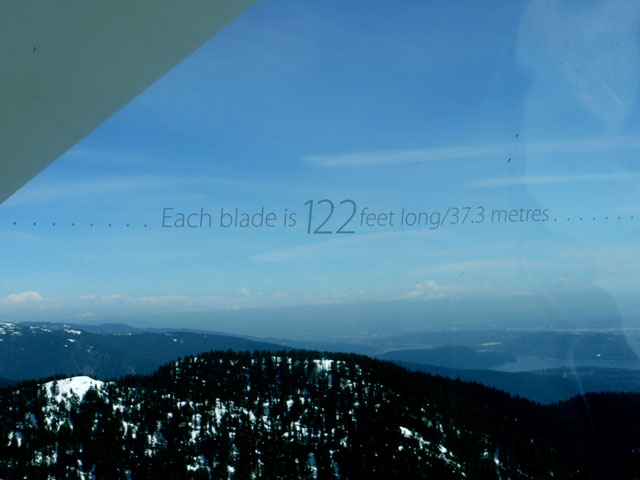 After some time to snap photos and gawk at the scenery, amazed by how far we could see down the range and how thick Vancouver’s yellow smog layer really looked from up in the Eye, we began our descent. Chris and Aaron, our 2 friends from Toronto suggested we meet up for a beer at the bottom of the hill. Apparently the restaurant knocked down beer prices by 50 cents each time the Canucks won, so the prices would be reasonable compared to say, a nine dollar roast beef sandwich straight from the cooler.

The chairlift on the way down afforded us another great view of the city, with cargo ships peppering the Burrard Inlet as the Sun moved further west across the sky. The air, balmy as ever against our skins. Conversations were much more animated this time as we felt somehow energized by what we had experienced in the Eye. Email addresses were exchanged amongst ourselves, promises to exchange picture with one another were made and as we went our separate ways, we thought of the Eye of The Wind and its far reaching gaze, knowing that whenever we would look up towards the North Shore, it would be the first thing we see. 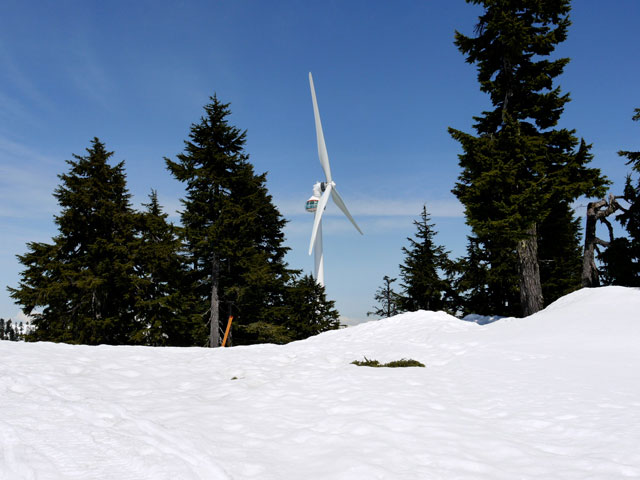