If you’re able to brave this morning’s frigid temperatures and snow, head towards downtown Vancouver for the largest Grey Cup festivity: the Grey Cup Parade.

Tens of thousands are expected to line the streets while the parade winds through the streets of downtown Vancouver to celebrate the peak of Canadian football. There will be hundreds of participants including floats, marching bands, smiles and even an appearance by the coveted Grey Cup.

Following the parade, be sure to visit Jack Poole Plaza and Canada Place Way for the Grey Cup’s free Nissan Family Zone and TELUS Street Festival.

The 102nd CFL Grey Cup championship takes place on Sunday, November 30 at BC Place Stadium and will be contested between the Hamilton Tiger Cats and Calgary Stampeders. The game will be aired live on TSN beginning at 3 p.m. PST. 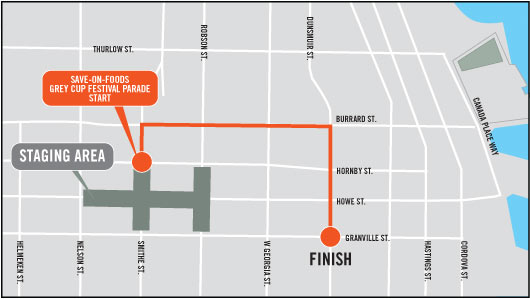