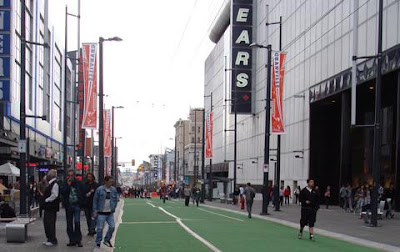 Image: SpongeG
This weekend was the first of many weekends (until Labour day) in which the 700 block of Granville Street (once known as the Great White way) will be completely car free. If you were downtown this weekend you might have already noticed that the level of activity along that stretch was far greater.
Furthermore, green artificial turf that was laid down last week. This further fuels the rumour that the World Cup finals and semi finals will be shown on large 27 ft screens plastered on that ugly Sears building. At least the building is good for something now.
This weekend there was some badminton going on, as well as free yoga and dance classes. The level of busking and street vendors had also picked up. Now I only hope we get more variety in busking like we did during the Olympics because right now  I see the same dude, doing the same tricks everyday. Time for some variety there.
I know what many are thinking. Isn’t Granville Street on that block already car free? Well yes and no, but now  officially yes. If that makes sense. In fact I would argue that Granville from Dunsmuir to Nelson should remain car free all year long. City council messed that one up.
VancityBuzz.com