Yesterday hundreds of thousands of fans flocked from all over the lower mainland to Granville Street to catch Stanley Cup game 2 action on the big screen and cheer alongside thousands of boisterous Canucks fans (and the odd brave Bruin supporter). After the partying, flashing and blunt smoking was finished the garbage that littered the streets wasn’t pretty.

The aftermath is reminiscent of what happens after the Celebration of Light (see 2011 schedule here).

Fans, I know it’s easy to just toss the garbage on the streets, especially when no one will notice as you’re cramped like sardines amongst the revelers but please either toss the garbage in the trash or take it with you and find a place to dispose of it.

More an more Vancouver has seen it’s clean streets littered. I don’t know if it’s due to a lack of garbage bins, human complacency or the bridge and tunnelers that make there way here on the weekends. Perhaps it’s a little bit of everything. Let’s hope Monday is a little better. 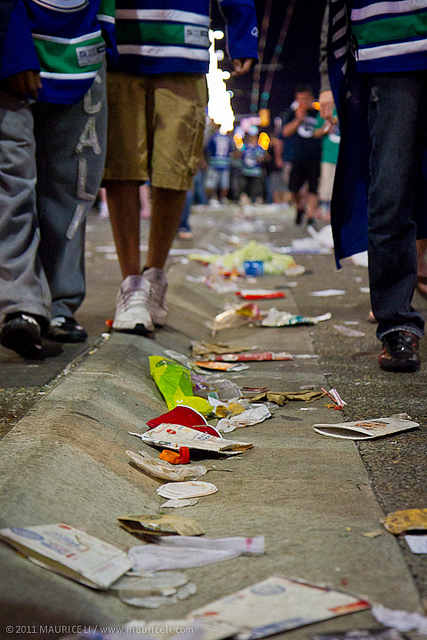