The massive concrete silos on Granville Island are taking on a whole new set of colours this month as they are transformed into a huge piece of public art.

As part of the Vancouver Biennale, the six 70-feet-tall concrete silos that belong to Ocean Concrete on Granville Island are being covered in giant colourful patches, and will then be further adorned as a mural by a set of Brazilian identical twins and street artists known as OSGEMEOS.

“The mural is destined to become one of the most recognizable and iconic works of public art anywhere in the world, and if all goes as envisioned, it will become a legacy of the 2014-2016 Biennale exhibition”, says Barrie Mowatt, President and Founder of the Vancouver Biennale.

The project, which ultimately will be 23,500 square feet and be viewable from 360 degrees and is aptly named “Giants,” marks the Canadian debut for OSGEMEOS, considered among those on the shortlist of people shaking up the global contemporary art scene world-wide.

Of course, it’s not all a simple matter of slapping a few buckets of paint; the Biennale has launched an Indiegogo crowd funding campaign to raise $20,000 towards the $125,000 cost of the project. 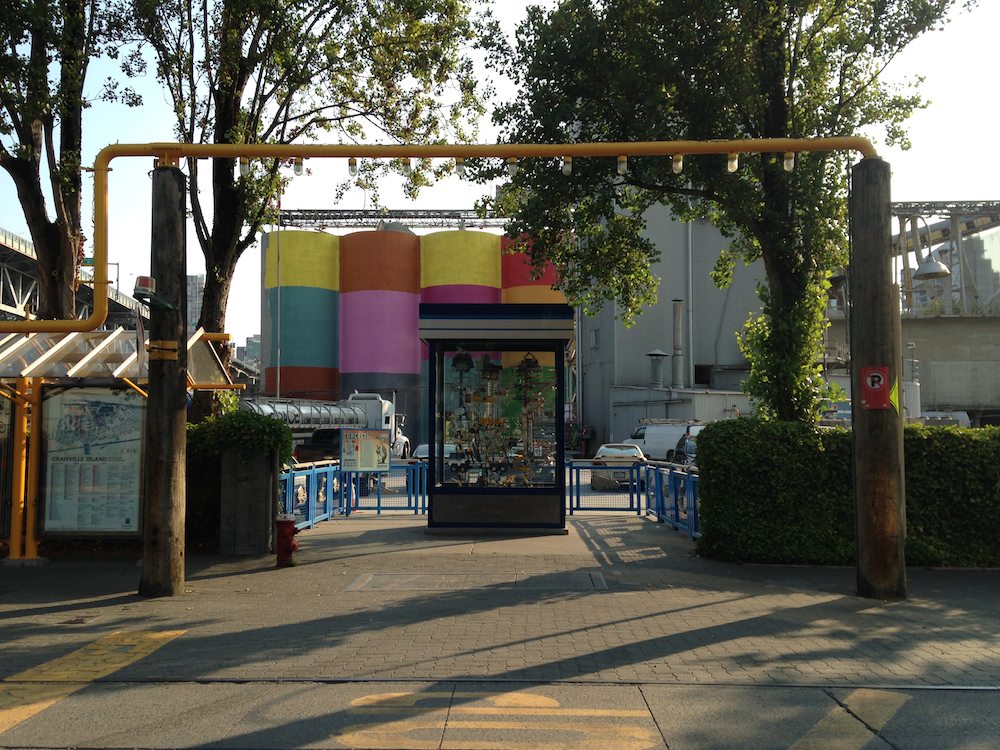 Silos on Granville Island are being colour-blocked for a new mural by Brazilian twins OSGEMEOS. August 11, 2014 (Lindsay William-Ross/Vancity Buzz)

“[W]e’re putting the “public” back into public art”, says Miriam Blume, Director of Marketing for the Vancouver Biennale.

Here’s what OSGEMEOS says about this large undertaking:

“The first challenge of this project was to find a location that would fit with our idea. We did not want a conventional two-dimensional wall that we had done before – we wanted something different, special and unique. We have an ongoing project called “Giants” that has been realized in several places in the world such as Greece, USA, Poland, Portugal, the Netherlands, Brazil and England, and we will continue now in Canada, but with a difference. As the proposed Biennale has a strong connection with sculpture, we decided to find a place where the painting can be transformed, creating a dialogue between the two-dimensional and three-dimensional worlds. Another aim of this project is to bring new characters to Vancouver while sharing perspectives and cultures and establishing a relationship between the people who frequent this site and integrate this work into the city scenery. The connection between water and land on Granville Island, on the False Creek margins, also had a lot to do with the choice of location – for us, the water acts as a vein, symbolizing life, and it is very present in our work.”

Colour blocking began on August 6, and is expect to wrap up on the 11th, with the twins starting their detail work on August 13. The official unveiling and celebration at Granville Island is slated for September 7.