Graham Spencer is going places, and getting there fast. On Friday, the 27-year-old Nanaimo native has the opportunity to make history in the main event of Maximum Fighting Championship 36 in Edmonton. MFC is Canada’s largest Mixed Martial Arts promotion, and Spencer faces Mukai Maromo in the main event for the vacant MFC Lightweight (155 pounds) Championship.

Spencer, a natural featherweight (145 pounds) has seen his fortunes change within the last year. After a successful undefeated stint with the Vancouver-based Battlefield Fight League, Spencer signed with MFC and defeated four-time UFC veteran Shane Nelson last October, setting up this new challenge with a familiar foe (Spencer holds a 2010 victory over Maromo, who has gone undefeated since then).

In an interview with Vancity Buzz, Spencer discussed the events leading up to Friday night’s fight, training with some of the UFC’s elite lower weight fighters (as a member of Team Alpha Male), as well as the opportunity put in front of him Friday. Despite only fighting twice in 2012, Spencer opened by discussing what an eventful year it was nevertheless.

“The last year has been pretty crazy,” Spencer explained. “I made some big changes in my life. I used to be a full-time electrician. I got to quit my job to be a full-time fighter. I’m really starting to take this seriously as a career.”

The first fight after that life-altering decision was the first of his MFC tenure, against Nelson; a BJ Penn trained fighter who appeared on the eighth season of the Ultimate Fighter. The decision was a good one, as Spencer walked away victorious via unanimous decision.

“That (Nelson) win did a lot for me,” said Spencer. “To get over that hump mentally. It meant that I knew I could compete against guys that had fought in the UFC. Shane had fought all over the world, and had fought some really good competition. To know that I could hang in there with him and beat him really meant a lot to me.”

With Spencer’s victory over Nelson, and Maromo’s victory over Adam Lynn the card previous, the opportunity presented itself for them to meet again, under much different circumstance. The last was a December 2010 short-notice tilt fought at a 150 pound catchweight. This time, both fighters get a full training camp, and they meet at Maromo’s natural fighting weight. In asking Spencer what number of possible variables could lead to a weight jump, he minced no words: just the right place at the right time.

“I really just wanted to stay active, and there wasn’t really a 145 pounder that I could fight on this card,”  Spencer explained. “They gave me the opportunity to fight in the main event on AXS TV (formerly HDNet) for a title, and I just couldn’t turn it down. This is just a one-time thing though. I’m naturally a (featherweight) so in the future after this, I’ll be fighting again at 145.” 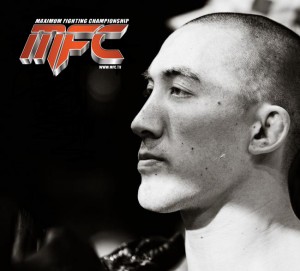 For young fighters coming into their primes, two years can be an eternity for skill development. In addition to training full-time, Spencer has shifted major facets of his training camp to Sacramento, California and Team Alpha Male. Training out of Urijah Faber’s Ultimate Fitness gym, Spencer has regular access to training with some of the world’s best 125-155 pound fighters. At this camp, the atmosphere was ramped up with so many members of the camp preparing for upcoming fights.

“I’ve been working on every part of my game, and I feel like I’m such a better, well rounded fighter,” stated Spencer. “Getting to go to Sacramento, and training with some of the best lightweights in the world has made me really ready. [The Atmosphere] has been great. The good thing about Alpha Male is that there are so many guys down there that somebody’s always preparing for a fight. This time, it was all of the top guys preparing it seemed. Danny (Castillo) fights the day after me, Urijah (Faber) and Chad (Mendes) were getting ready for the week after me [for UFC 157*] and Joe (Benavidez) just fought a couple of weeks ago. So it was definitely the most intense training camp I’ve been around. You just have to be on your A-Game every single time out or you’re just not going to last.”

Spencer acknowledged his opponent Maromo favors stand up fighting, and a recent addition to Team Alpha Male has been influential in his some of his own striking training. Decorated Muay Thai and MMA veteran Duane Ludwig joined Alpha Male as their new head coach in early January. Ludwig, the UFC’s acknowledged record holder for fastest Knockout win stepped right in and pitched in, much to Spencer’s delight.

“Duane’s an amazing coach,” gushed Spencer. “He knows so much about MMA, and so much about striking. He’s been breaking down fight videos for me, and he’s been watching Mukai’s fights and watching my fights, and giving me tips during sparring, and making sure I get all the rounds in the ring, and I have proper footwork. It’s been great having Duane.”

Spencer has also been working with a mind coach to focus on the mental aspects of his fight game, and goal alignment. While he admitted that he would love to have the ability to train from home full-time, the experiences in Sacramento have been invaluable, and the time away from his family and friends motivates him, and “makes him hungrier” in his quest to become one of the elite Featherweights in the world. In closing, Spencer summed up his style and thanked fans for their support on his journey to date.

“I bring a style that a lot of [fighters] don’t like. They don’t like to fight guys like me because I’m just going to be in your face the whole time. Trying to take you down. Trying to grind you down. Even if you’ve been training for that, it’s different when the lights are on and we’re in the ring. To be honest, I guess it’s cool that it’s for a belt, but it’s not why I’m doing this. I just want to provide to Mukai that I’m still the better fighter, even if it’s not in my weight class,” Spencer closed with a note for his fans in Vancouver and elsewhere that have supported him so far.

“Thanks so much to everybody for your support. I know we don’t get AXS TV here but you can see it on TSN 2 soon enough.”

While there is no way to watch the fight live on TV (Shaw dropped HDNet from its cable package last year shortly before the rebrand to AXS TV), TSN 2 holds broadcast rights to MFC in Canada, and the event will be re-aired at a date TBD. Maximum Fighting Championship 36: Reality Check takes place at the Shaw Conference Centre in Edmonton Alberta this Friday, February 15, 2013 at 5 p.m. PST.  If you will be in Edmonton the night of the event, tickets start at just $35 and are available at Ticketmaster.ca.

*Note: Mendes has since been removed from the UFC 157 card after they were unable to find a replacement for his injured opponent Manvel Gamburyan.