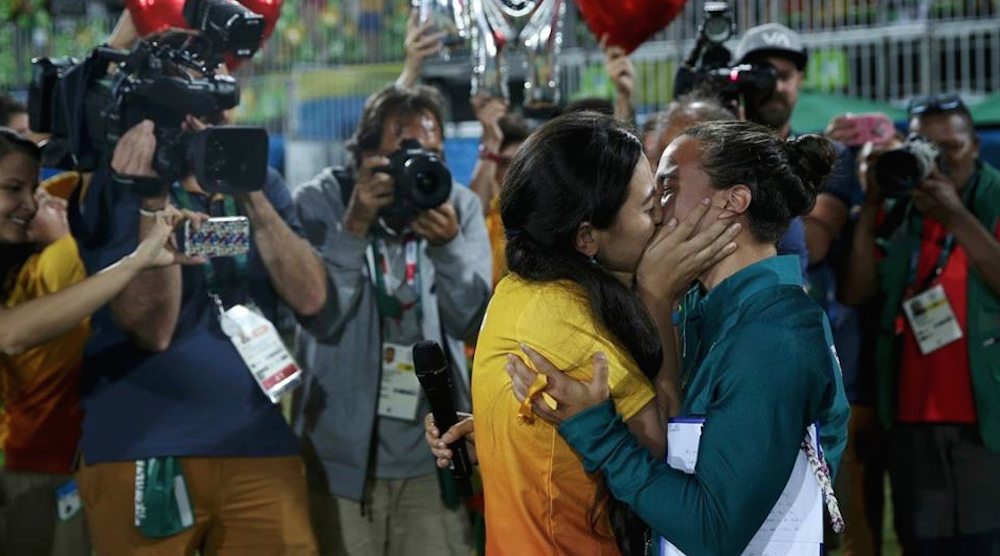 Brazilian women’s sevens rugby player Isadora Cerullo is celebrating a historic moment at the 2016 Olympics. Her team did not win a medal, but her girlfriend, Marjorie Enya, proposed to her at the Games.

The couple has been dating for two years, but Enya waited until this year’s Olympics to pop the question because she wanted to make it extra special. “I wanted to show people that love wins,” Enya told the BBC. “The Olympic Games can look like closure but for me it’s starting a new life with someone.”

Italian policemen cooked an elderly couple dinner after neighbours reported they heard the seniors crying. Jole, 84, and his 94-year-old wife, Michele, told authorities that no one had visited them for several months and they were extremely lonely. The policemen decided to keep the couple company and made them pasta to cheer them up. The police force shared a picture of the couple enjoying their meal and the post has since gone viral.

When a leopard fell in a large open well in India, animal experts and villagers rushed to save it. They managed to pull the leopard out of the 18-metre hole using a large wooden platform and a cage. The animal was examined by vets and released back into the wild after the rescue.

Philadelphia Uber driver Ellis Hill is watching his son participate at the Rio de Janeiro Olympic Games all thanks to the kindness of a stranger. During a recent Uber ride in Philadephia, passenger Liz Willcock and Hill bonded quickly. Hill told Willcock that his son, Darrell, would be heading to Rio to compete in the shot put event. When Willcock asked Hill if he would be going to watch Darrell in Rio, he said he could not afford the trip.

“It was devastating to hear that,” Willock told PEOPLE. “Here’s this wonderful man who has a close relationship with his son and I know any parent would want to see their son or daughter compete at the Olympics, but it was very understandable how that could be out of reach.”

Willcock knew she could help Hill get to Brazil. She works in the travel industry, pulled a few strings, set up a GoFundMe page, and managed to raise $7,500 to send Hill watch his son go for gold at the Olympics.

“I feel really grateful and overcome by the knowledge that there are good people out there,” Hill said.

Zion Harvey recently had the experience of a lifetime when he got to throw the ceremonial first pitch at the Baltimore Orioles baseball game on Tuesday night. The moment was very special for the nine-year-old because he is the first child in the world to receive a double hand transplant after suffering from a serious life-threatening infection. Harvey went through intense therapy at the Children’s Hospital of Philadelphia in order to learn how to use his new hands.

6. Man with Muscular Dystrophy backpacks across Europe on the backs of his friends

Man with Muscular Dystrophy sets off for European backpacking trip on his friends’ backs https://t.co/UxTza1utLr pic.twitter.com/juFsA8N5Bu

Keven Chandler is not letting Muscular Dystrophy get in the way of living life to the fullest. The 30-year-old from Fort Wayne, Indiana recently set off on a backpacking trip across Europe.

Due to his genetic condition, Chandler cannot walk and uses a motorized wheelchair. But for the Europe trip, Chandler got around by sitting in a specialized backpack, and was carried on the backs of his friends throughout the entire journey. “We’re hoping to inspire people that are limited to know they really aren’t limited. They can live their dream – it might juts be a little more difficult,” Chandler told CNN.

7. Bride walked down the aisle by man who received her father’s donated heart

Jeni Stepien was escorted down the aisle at her wedding last Friday by a man who received her father’s heart. Stepien’s dad was murdered a decade ago, and his organs were donated following his death. His heart went to a man named Arthur Thomas, who was in dire need of a transplant.

Stepien’s family kept in touch with Thomas after the operation but never met in person. When Stepien got engaged last October, she was not sure who would walk her down the aisle. Her fiancé suggested that she get in touch with Thomas to ask him if he would take on the duty. Thomas agreed and traveled from New Jersey to Pennsylvania to walk Stepien down the aisle. It was a heartwarming and emotional moment as she had a little bit of her dad with her on one of the most important days of her life.

Gymnasts from North & South Korea take a selfie together. This is why we do the Olympics. pic.twitter.com/Id44OuehN3

While North Korea and South Korea have their fair share of political tension, two gymnasts from both countries came together during the 2016 Rio Olympic Games to show a moment of unity.

South Korea’s Lee Eun-ju and the North’s Hong Un-jong posed for a selfie that many are calling an iconic moment of the Games. The women are being praised for sharing the Olympic spirit by putting aside the differences of their two countries to show how sport can bring people together.

9. Toddlers burst into giggles after sharing a kiss

End your day with the cutest video currently making rounds on the internet.